Cryptic-ish crossword - contains some neologisms, all of them to be found in the OED 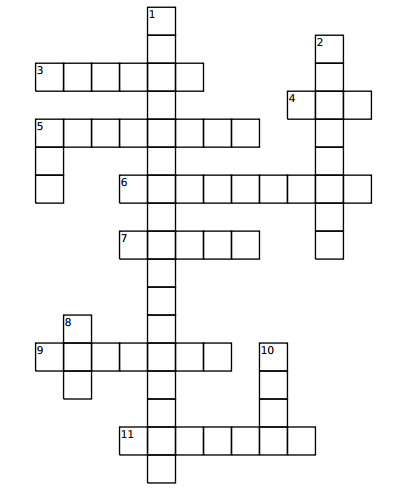 Across
3. Amphibian surmounts physicist (6)
4. Hilarious partner (3)
5. Spurn a guilty plea outside Aquidneck Island (8)
6. Performing a supersonic number in the head of an adult insect. (9)
7. Sightless, tailless, expensive and suitable for general audiences (5)
9. Blur's life, not your jumping around. (7)
11. Dennis Ritchie's creation doing half a dance outside a flat to check your humanity (7)

This is my first attempt at a cryptic-ish crossword (some of the clues are cryptic, I've thrown in a couple of really easy ones too, to provide more cross-checking).

I'd appreciate constructive feedback on what you think of this puzzle, what level of difficulty it is, and what I should do differently to improve things for the next one.

In response to query: OED is the Oxford English Dictionary. It's the most authoritative dictionary for English. The point is that while some of the words are neologisms, they're ones which are well-known and accepted enough to have become part of the English language (by the OED's definition).

Mach is a fast number, in (from the riddle), the head of an adult insect is "ima" of "imago". Machinima is using computer to create a cinematic production.

"Spurn a guilty plea" is like "diss a plea", and googling aquidneck island shows a lot of stuff related to disciples (as well as a book saying disciples first settled on the island).

I finally got 6 across after trying for two days.

The Ogamy is imago backwards (adult insect), kary is like kareoke where you perform a quick number. In the head meaing kary before ogamy. I'm surprised I got this.

ABOMINABLE SNOWMAN, since Olaf is a Disney snowman and the Abominable Snowman is a cryptic. Credit to @xnor for getting this.

3. Amphibian surmounts physicist (6) - this one is (still) brilliant.

WAG — The British press use the acronym WAGs to refer to the "wives and girlfriends" of professional footballers. The singular form is WAG. And of course wag also means "witty person". From @squeamish ossifrage

5A. Spurn a guilty plea outside Aquidneck Island (8)

6. Performing a supersonic number in the head of an adult insect. (9)

MACHINIMA, credit to @Quark below.

BLING, credit to @QuyNguyen2013 for getting this one.

PARKOUR, since Park Life is a song by Blur and parkour is jumping around - not "your" jumping around but ours, as in parkour. Credit to @frodoskywalker for getting this.

10. Ghoti (4) - nice one, but it's trivial if you've seen it before and pretty undoable otherwise.

I think it would've been better to do a new take on this, with slightly more of a hint as to what the idea is. E.g.

11. Dennis Ritchie's creation doing half a dance outside a flat to check your humanity (7)

CAPTCHA: Dennis Ritchie's creation is C. Half a dance outside a flat is APT (apartment) CHA (from cha-cha). Checking your humanity is what CAPTCHAs do. Credit to Geobits

These are a bit silly!

because SPURN A GUILTY PLEA =

I think I've got a couple more clues. I should probably edit these into the earlier answer, but I'm not sure how to go about it.

WAG — The British press use the acronym WAGs to refer to the "wives and girlfriends" of professional footballers. The singular form is WAG. And of course wag also means "witty person".

6. Performing a quick number in the head of an adult insect. (9)

Could this perhaps be PANTOMIME? It's a kind of performance, and it has an ANT in it. Haven't quite figured this one out yet.