This party ends in tragedy (I planned it from the start, you see)

The DJ from Moscow was pumping out tunes.
The house mostly bare but for furniture, strewn;
A sofa for three and an armchair for one.
The guests started piling in, looking for fun...

'Twas Elle who came first, seeking somewhere to slouch,
She leaned on the wall with her feet on the couch.
Her boyfriend soon followed and sat down beside,
And cozied in close as they both turned and eyed...
...a blue jay that fluttered in, down from the sky.
More falling than flying - it wasn't clear why.
It flipped as it fell, landing hard with a whack,
Between the two seats and lay dead on its back.

The next to arrive, a conservative man,
With laces as straight as the beeline he ran.
He sat down, oblivious, square on the bird!
And that is where things went from weird to absurd...

The twins came next; first one then two,
Like lightning bolts struck from the blue.
The first crashed on the floor, out wide,
With legs propped up, on armchair's side.
When number two came dropping in,
He settled on his brother's shin!
His feet, in turn, then came to lay,
Upon the man, upon the jay!

By now the room was one big din,
But people kept sardining in.
As case in point, there came a gent,
Who, dressed as Mr T, then went,
And crammed himself beside Elle's guy,
And gave high fives to those nearby.

Then Elle rushed in-- Can that be who!?
No time to check... (perhaps there's two?)
She looked for space, dived head-first in,
And made a seat of piled up twin.

But now the time had come at last,
As I stepped into chaos, vast.
I surveyed everything in sight,
Then moved with purpose for the right.

This party ends in tragedy.
I planned it from the start, you see.
'Cos as I sat, they could not flee...
As all that was just ceased to be!

Draw a picture of the room, including everyone's exact position, as it was in the moments before I sat down.

riddle knowledge
Share
Improve this question
asked May 1, 2018 at 3:24

As pointed out in the comments by crcroberts, this particular room is 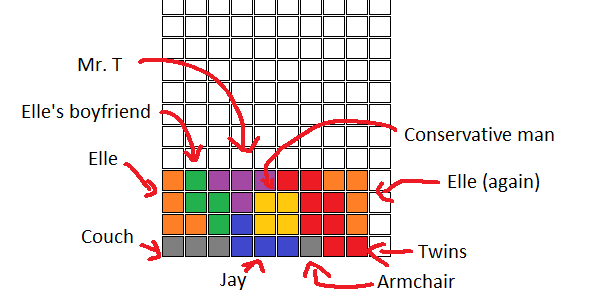 Tetris's tune is quite famous, and it is actually a Russian folk song (thanks Alconja!). At the start, the board is empty except for a group of 3 blocks (couch) and a group of one (armchair), probably leftovers from a previous line clear.

Elle is the L piece, which lies close to the wall, on top of the couch.

Elle's boyfriend is an S, who can fit next to an L piece.

The jay is, of course, the J piece, that also happens to be actually blue in the games. It lay on the floor on its back, between the group of 3 and the group of 1.

Conservative man can be another term for "square", which is also actually literally mentioned in "square on the bird". So this has to be the O piece.

Mr. T is the T tetromino, who is adjacent to Elle's boyfriend and also a bunch of others.

Another L, fitting in the space that was left for it on the right side.

"I" is the I tetromino. Once it settles down on the right column, a Tetris will be formed and all four lines will be gone.

23
How can I avoid the "Riddle-maker's Dilemma?"

6
The woman between the two pillars
4
Not the Jay you saw in "Clerks"
15
A Tolkien-inspired riddle
9
No Christmas presents until you solve this!
5
What should Trump do to get in?
3
Where did this mysterious note come from?
7
An eerie warning from the other side
9
Riddle me this, birdman
2
Fiction Book Who Am I? #3
1
Fiction Book Who Am I? #4 (Guess the book too!)