Little Hans just got a model railroad kit from his grandfather for Christmas.

His grandpa explained to him, that when he was young, he was a model railroad enthusiast, and encouraged his grandchild to not despair if he cannot put together everything correctly the first time.

There is no shame in it, as his first attempt at model railroading was also unsuccessful: he just modeled the station of his home town, Friedrichsfeld .

The question: did the grandfather use an AC or DC power supply for his model railroad?

I've only chosen Germany as a location because both AC and DC was commonly used. This puzzle has a logical explanation, I didn't want it to make it into an assumption like "in this country AC (or DC) was very uncommon".

He used DC power. Looking up Friedrichsfeld, it looks like this: 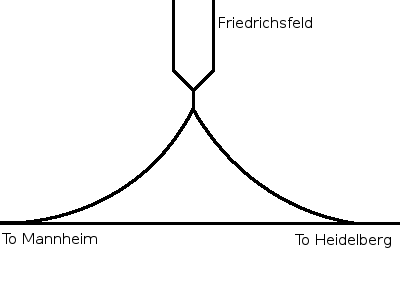 DC-trains usually do not have the third rail that is common with AC-systems and instead simply use one rail for power and the other as ground. If you try to build a triangle with a system like that... 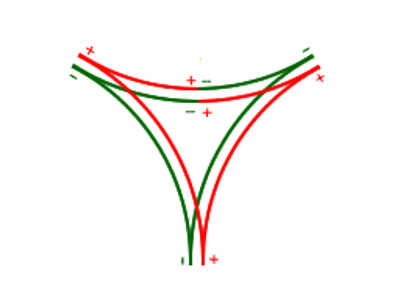 ...you get a nice, little short. This is a common beginner's mistake, the same thing would have happened with a loop (although those are much rarer in real railway systems).

Many model trains are powered via the two rails they ride on (rather than a "third rail" as in many metro trains and also Lionel model trains).

The express train had two locomotives. Had they used DC power, their orientation would not matter: facing the same way they would drive together, and facing opposite directions, the "backward" facing one would also reverse its motion (because its contact with the rails was backward too), making the whole thing move forward.

But with AC power, the direction of a (single-phase) motor does not depend on how it is wired externally. So the two electric locomotives facing opposite directions simply played tug of war.

7
A fish story on aymara language
3
Is there one anti-model that refutes three invalid inferences based on “more than half"?
7
The Story of Jason & J____
3
A story about liars
7
Listen to my Story…Let us find the Unique Invisible Pan Digital Pair
3
Whose story doesn't add up? (v3)