The only hint I'll give at this stage is that the sequence is infinite.

If nobody gets it within a few days, I'll give a few terms that come after the wanted term.

Edit: this is a wholly mathematical puzzle, a number sequence. There are no red herrings, elements meant to mislead or be ignored, or punctuation tricks etc.

Note: this sequence can be defined in 12 words.

Further hint (in response to comments from @MohitJain and @MattMalone):

the numbers are all written in the same base, which isn't base 4 or 10.

Based on the following analysis, the next number in the sequence is:

The number base is:

2i, also known as quater-imaginary

This table converts the numbers to base 10:

This graph shows the sequence: 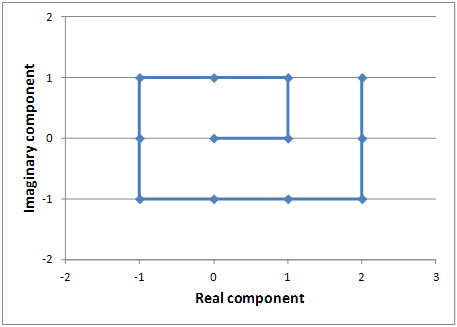 Here is the sequence defined in 12 words:

Gaussian integers, base 2i, ordered in counterclockwise Ulam spiral beginning at 0.

Anyone who hasn't encountered

Gaussian integers, base 2i or Ulam spirals

before will find a lot of interesting stuff by clicking on those links.

Or if you want a quick explanation here, here goes...

Gaussian integers are numbers of the form a+bi, where a and b are integers and i is the square root of minus 1. These were first studied by Carl Friedrich Gauss in 1832.

Base 2i means what it says: instead of expressing a number using digits intended to be multiplied by powers of 10 (giving the decimal system), do it for powers of 2i. Base 2i is also known as quater-imaginary. It was first described by Donald Knuth in 1955.

For expressing Gaussian integers, base 2i is symbolically less complex than any real base.

Examples of numbers written in base 2i:

Expressed in base 2i, the non-negative integers run

and the negative integers, ordered by increasing magnitude, run

The next hints would have been:

Each of the three main mathematical ideas used to construct this sequence is associated with a distinct mathematician with a surname containing 4 or 5 letters.

Whoever thunk of this won't maul or gas us. (Anagrams of the three mathematicians' surnames.)

This answer is a work in progress. Below are the differences between terms n and n+1:

These values are all even index terms from the original series S or their opposites. Like so:

Still trying to find some pattern in these. Another thing I notice:

Update: Still trying. To state the above a little differently:

The three problems with this line of investigation:
1) The pattern disappears at the end
2) It can't predict odd-numbered terms
3) It's hard to ignore

Not the answer you're looking for? Browse other questions tagged mathematics pattern number-sequence or ask your own question.