Shortest way from B to A

Not yet fully recovered me
Got dropped off by my crew at B
The lady waits for me at A
Please tell me what's the shortest way?
I've got this limp you see 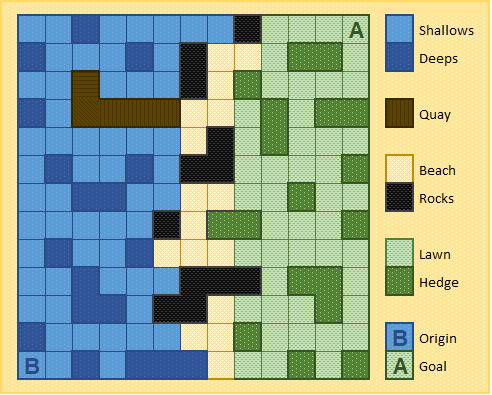 What is it that I will take home
After my long and perilous roam?

Here is a solution in 24 steps if you can only go to a directly adjacent tile. 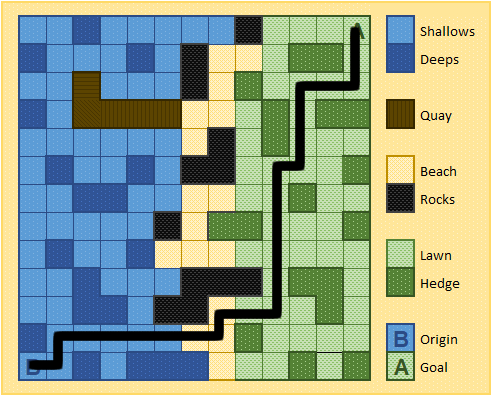 And here is one solution in 15 steps (there are others) if you can also go diagonally. 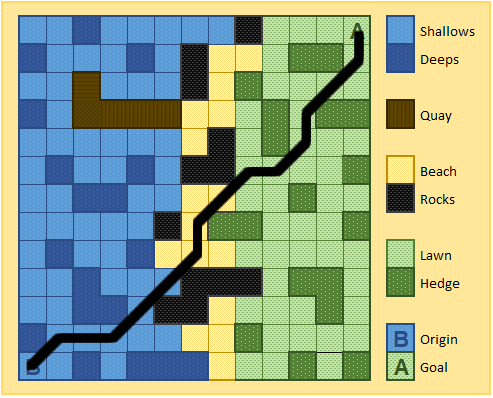 I think some of the words are hinting that

Each move, you hop over one square. “Skipper”, “limp”, and “unequal step”

So in that case the shortest route, which

Sticks to shallows, beach, and lawn

Is (sorry, on my phone so I can’t make a graphic)

The quay. That is, a move in the shape of the quay on the map. This is equivalent to a long knight's move, 1 horizontal and 3 vertical or 1 vertical and 3 horizontal.

My reasoning is as follows:

1. The quay is never mentioned anywhere in the poem or elsewhere and is superfluous to the puzzle as it could simply be replaced with deep water if it were intended to be impassable. 2. The phrase in the poem “my unequal step" contains the letters necessary to produce "quay". This is tenuous but the question bears the anagram tag. Perhaps there is a larger anagram I am missing. 3. The quay could be considered an unequal step.

My attempts to use this step thus far:

Have been unsuccessful. Presumably we are looking for a step that provides a unique shortest path which will be used to decipher the rest of the puzzle. There are a couple ways in which the quay step could be interpreted. If we are not permitted to jump over deep water then we cannot progress after the third step. If we can jump over deep water, rocks, and hedges then there are multiple solutions that each require 8 steps.

An alternative and more complex step:

Perhaps we are intended to use two unequal steps, a quay and something else. The simplest would be a single adjacent move. I suppose this would resemble a limp by alternating small and large steps. It’s not obvious which step we should begin with, but I believe there is a uniquely shortest path starting with the small step as depicted below. Black dots indicate the position after the short step and red dots the position after the quay step: 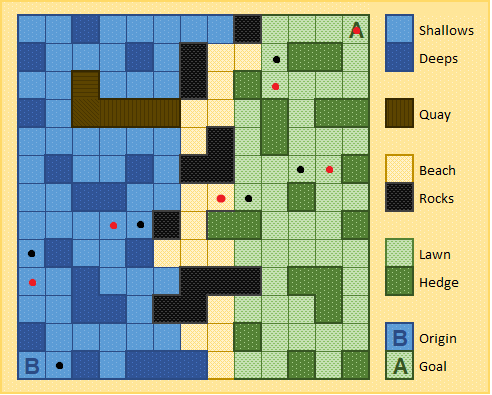 Assuming that this pirate has been 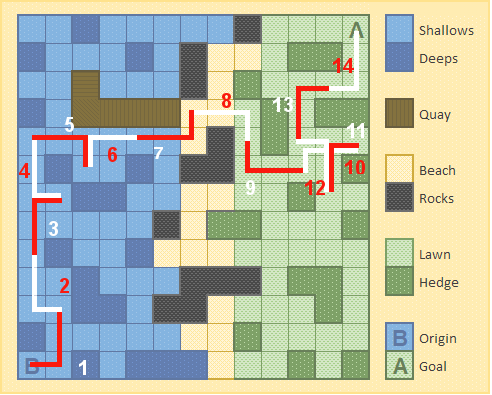 I think that the rules for moving are:

Alternate between taking steps of length 1 and steps of length 2 ("unequal step", "limp", etc.); that is, on the first go, take a step to an adjacent cell, and on the next turn, step to a cell that is two away in a cardinal direction
It's possible to go from B to A using this rule and only using shallow, beach, and lawn. Here is one possible route; it uses some backtracking so there might be a shorter route. 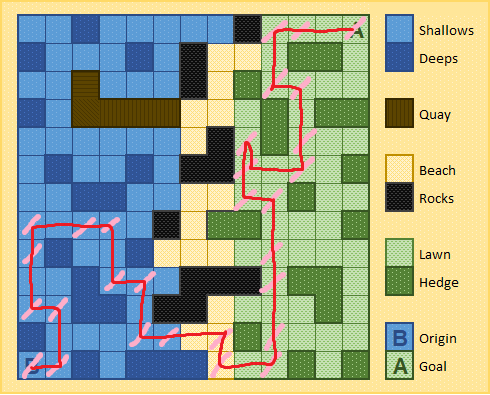 I think the hint assume :

the part where it say "Yet one of them did call my bluff Gorged on my leg with glee" i assume it mean he have a fake legt then he must >!be walking strangely. most likely 1 small step (1 square) then 1 normal step >!(2 square) or vice versa and alternating.

So the answer must be : 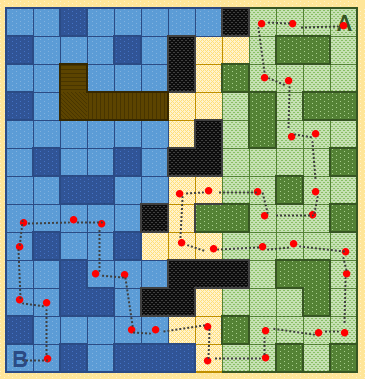 Second edit: The first part of this post is the original post and the first (humorous) edit. My answer lies with the (rest of) second edit at the end.

If the idea of alternating 1-square and 2-square steps is right, then i think the shortest path (23 steps) is as follows. 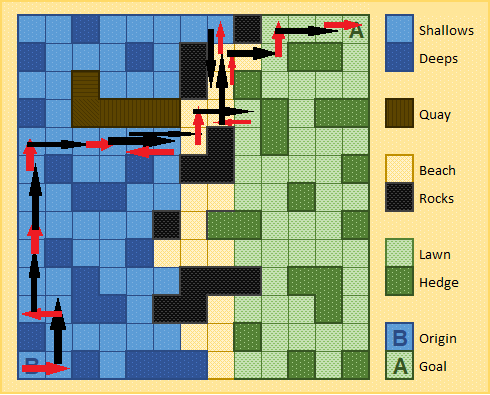 Also, if walking on the quay is allowed then the shortest path (19 steps) is as follows. 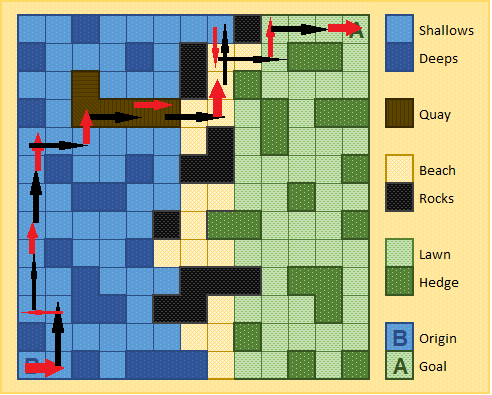 There is some back and forth, but i hope its clear, 1-square steps with red, 2-square with black.

Also the question "what will i be taking home" remains unanswered, unless it is 100 rep, or a headache, or something like that.

Assuming that we have to be stepping on an allowed square, but can hop over others, AND that we have to alternate between 1 and 2 square steps, then the answer can be in 16 steps as follows, 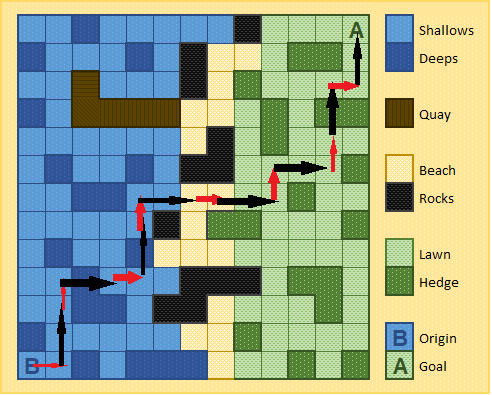 In this case, that which i will be taking home is the stairs!

I see many ways to move if we consider him as a knight, i.e uncommon movement, so if we look at it this way and believe we can only move on shallows, beach and lawn, we can take the following paths, both in 16 steps. [ 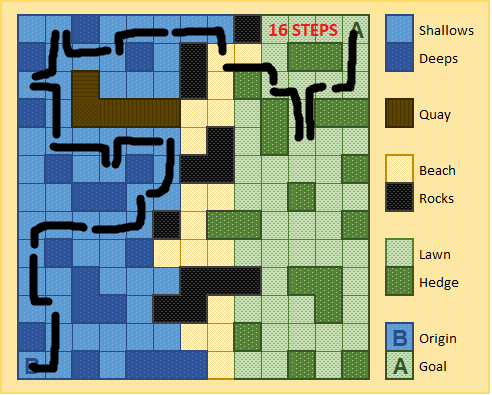 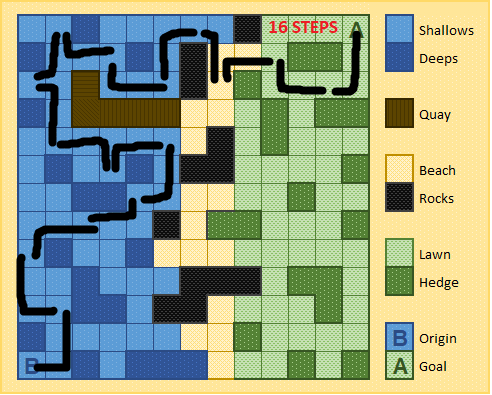 Not the answer you're looking for? Browse other questions tagged riddle cipher grid-deduction anagram mazes or ask your own question.

21
A Code from the Lines
19
Find your way to the control room
18
A letter from Mr. Pirate, Mr. Roller, and Mr. Knight
13
Longest in one way
11
LongEst in anothEr way?
12
Pentopia: One-way Crossing
1
The shortest puzzle (part 1)