Note: You will probably want some form of graph paper, square paper, crossword-constructing program, spreadsheet software, or some tool for inputting things into a grid to solve this. A blank 25x25 grid has been provided for convenience, but this does not imply that the size of the grid is 25x25; the size of the grid is for the solver to determine.

The answer is a single word, thematic to the puzzle. 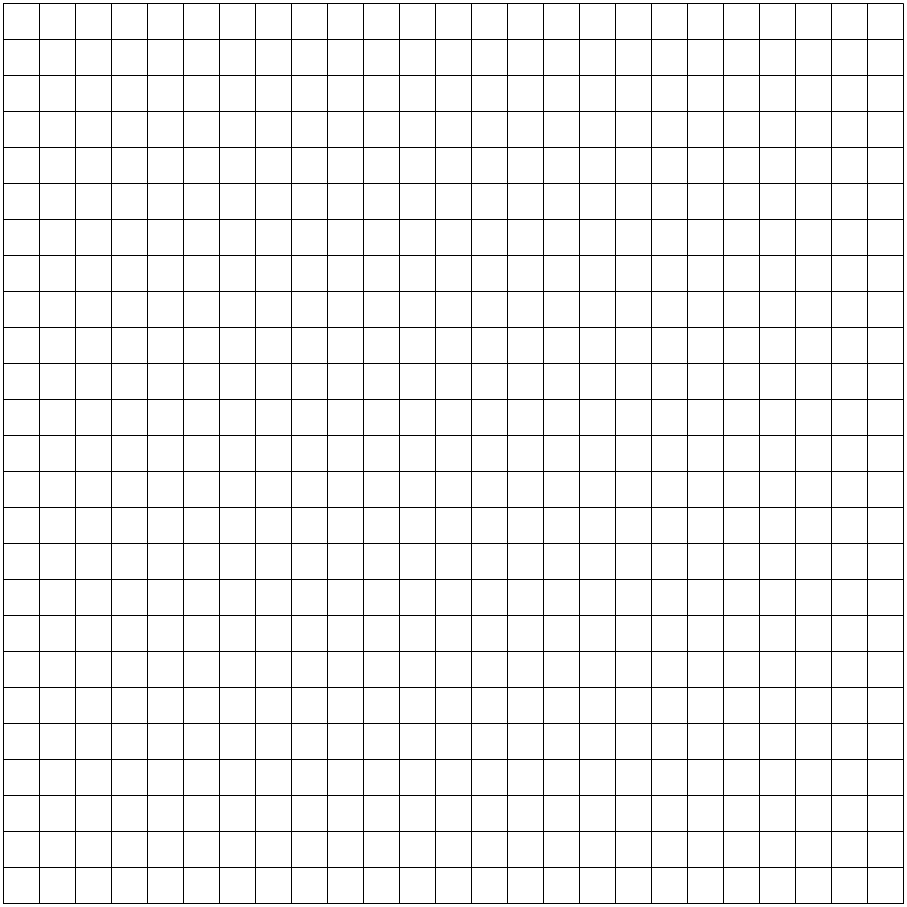 The solutions to the cryptic clues are:

However, trying to fit these in a grid, we quickly run into trouble. The trick is that

The cells at the intersection of an odd-numbered row and an odd-numbered column (numbered from top-to-bottom, left-to-right, 1-based indexing) contain two letter each, unless it's on the main diagonal. Using this rule, we can the fill the grid as follows: 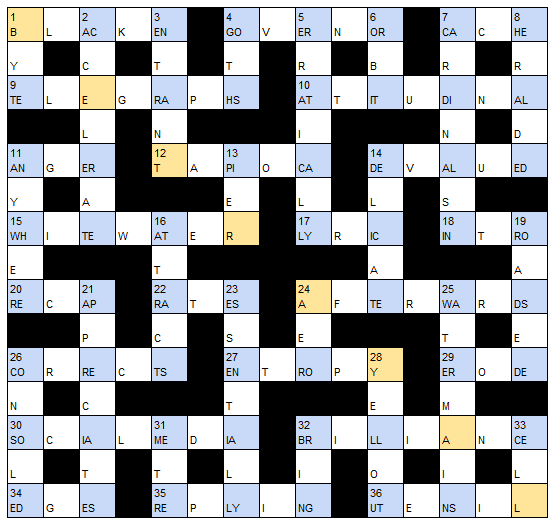 Now we can find the final answer by

reading along the main diagonal, which says BETRAYAL, which is thematic, because the letters are literally "double-crossing".

Wrap-up: the making of Deceptive Diagramless

The idea for this puzzle was inspired by a bunch of variety cryptics in the Jaw-Dropping Puzzles article written by TMCAY. The puzzles in question had some cells that each contained multiple letters (rebuses), and (not liking how constrained barrred cryptics are) I wondered if I could make a rebus cryptic with a British grid. I then hit upon the idea of making each crossing cell have two letters.

The fill I chose unfortunately wasn't great, and I was half-asleep when I wrote some of the clues. Further, I didn't immediately have a way to extract a final answer. All in all, when Deusovi tested this, he had great issue with it.

So, after brainstorming how to fit a final answer, I decided to go with "some crossing cells are only single-letters, which spell out the answer". (Trying other things, like "making only some cells be double-crossing and spell out the answer" just made it impossible for me to find a suitable answer and fill the grid still.) Given that we had a grid with lots of double-crossings, it made sense that the answer should be BETRAYAL, which also fit a 15x15 grid perfectly on the diagonal.

I booted up QXW and inputted all the constraints. Instead of using the UKACD18, which often gave me ridiculously obscure words, I used 12dicts instead, and manually weeded out the American spellings because I'm in the UK and I wanted revenge on all the Americanisms used in variety cryptics. This is also the reason you see Britishisms like B(LACK)EN, GOVE + RN + OR, and MET + RE. I also hate clues that refer to singers or actors or sports or other types of pop culture, so I made sure to get my revenge by referring to academic subjects (e.g. BRING, DEL+IC+ATE, BY+T_E).

I then used the autofill for a few recommendations before manually working my way through the grid. The top right corner of the grid gave me the hardest trouble, but in the end I went for CARDINAL SIN instead of whatever the other alternative was, and got a reasonably-cluable grid.

Then I wrote the clues, and passed it to Deusovi for testing. As he often does, he pointed out the iffy clues which I updated. But then I wondered, "He already knows about the mechanic from when he tested the first attempt. What if I were to give it to someone else? And I need to make sure the gimmick of double-crossing isn't too easily-spotted. I know, I won't give enumerations, and I probably won't give the grid either so that it's not easy to spot what's going on for a while."

Thus I made the cryptic a diagramless enumerationless cryptic, and sent it off to Mad Jaqk for testing. He pointed out that I should probably add in the "(2 wds.)" tags to make it a bit more fair, so I did. He identified the red herring CHAIN LETTERS for 9A, but didn't put it into the grid because 9A did not have a "(2 wds.)" tag. He ended up getting the answer within a reasonable amount of time.

Next, I sent it off to Grant to test. He unfortunately didn't fare so well, not even spotting the gimmick and giving up after solving about half of the clues and not being able to slot them all together.

The next tester I sent it off to was ExtraTricky. He also didn't fare too well; he found the gimmick but couldn't solve as many clues as would have been useful.

The last tester I sent it off to was Projectyl. He blazed through the whole thing in under 90 minutes, and at that point I knew the puzzle was fair for a team solve (as Projectyl often enters puzzlehunts as a single solver) and wasn't too ridiculous. He also said that it was an overall enjoyable solve, so at this point I decided to publish it.

Unfortunately, it seems some of the earlier clues managed to slip back in. Thankfully it seems nobody had much trouble with them. Also, "23D Basically, the Spanish sent me all year" didn't work as well as I'd wanted it to ("the" in Spanish is "el", not "es"; "es" is "is") but was saved by the fact that ES happens to be the 2-letter code for Spanish. Oh well, I'm sure I can catch these things next time.

I would like some feedback on this puzzle. Which clues were your favourite? Which clues did you dislike, or think were unfair (barring the ones I've mentioned)? How was the gimmick? And so on.