Ernie and the Alchemist's Gift

For Ernie, the task of choosing Christmas presents for his friends is always a struggle. I think that is because, while he finds it easy to solve problems relating to machines, mathematics, and materials, he has difficulty with minds. He is never sure exactly what presents his friends will like and as a result, agonizes for weeks until he can convince himself that he has chosen something appropriate. I always try to reassure him that "it's the thought that counts" (and Ernie certainly puts plenty of thought into his choices of gift), but that still doesn't reassure him. This year he had started earlier than usual (back in June I think), and had finally sorted out gifts for everyone except his old school friend Aristotle.

Aristotle was everything that Ernie wasn't. Emotional, where Ernie was logical; intuitive, where Ernie was rational; innumerate, where Ernie was mathematically inclined. And... an Alchemist by profession. Aristotle had never actually managed to transmute an element, and his experimental elixirs of life were anything but life-enhancing. But after every failed attempt to isolate phlogiston or dig up the philosophers stone, he would just smile a little wistfully and begin planning for his next experiment. Surprisingly, considering Ernie's usual views on "witch-doctors, charlatans and anti-scientists", they remained the best of friends, although their gifts to each other often had a somewhat ironic aspect.

When I dropped in on Ernie yesterday I found him hunched over his desk with a worried frown. "Any luck?", I asked. "No", Ernie replied, "whatever can you get an alchemist for Christmas?". "Mmmm, how about the secret of converting lead to gold?", I asked, toungue in cheek. Ernie grunted, "Pah, fool's gold that is!". But then a look came over his face. "Brilliant - you have given me an idea!", he exclaimed, jumping up and heading over to one of his storage cupboards. He pulled out a curious object - a shiny cube that glowed a bright golden shade in the afternoon sun. "FeS2, iron-disulphide, iron pyrite, fools-gold.", he explained. "I've had this for years - it's a perfect cube exactly 100 mm on each side. Now what I though is that if I wrap it up in a very thin sheet of pure 24-carat gold, it will make the perfect gift for Aristotle - fools-gold, wrapped in gold, for a fool! I think he will appreciate the joke". 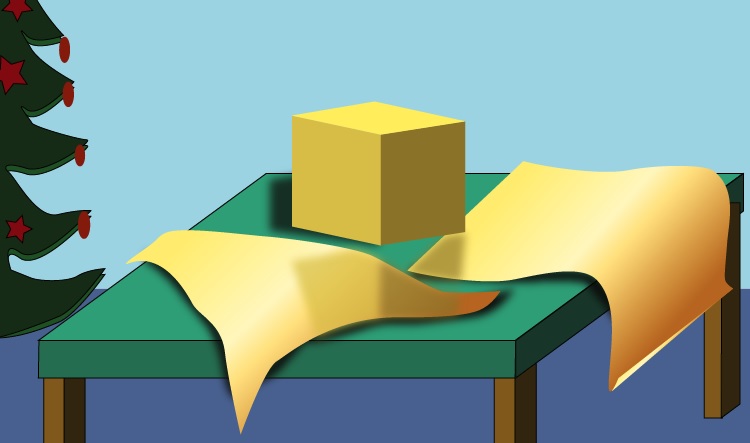 Ernie asked if I could help him wrap it, as he was never very good at wrapping tidily - "and this needs to be tidy", he said. "If there is even the tiniest gap showing the pyrite under the gold sheet it will spoil the effect totally". He explained that he had two sheets of gold lying around as leftovers from an old experiment and, if his calculations were correct, each should be precisely just big enough to do the job. "One is a perfect square of gold, and the other is a perfect equilateral triangle of gold. They are both very thin, so you can ignore the thickness of the gold when deciding how to wrap. It is OK for the gold sheet to overlap, but I don't think you should make any cuts or slits in it." I accepted the job, and had just asked which piece I should use (the triangle or the square), when there was a phone call and Ernie said he had to rush off "on a kind of emergency" and wouldn't be back till much later. "Just use the wrap with the smallest surface area" he called as he headed out the door.

To be honest, I had no idea how to work out which piece would be best from first principles, so I cheated a little. Ernie had said that both pieces would be just big enough, so I measured the side-lengths, worked out which one had the smallest area and (after lots of practice with sheets of newspaper) finally managed to wrap the cube in a single uncut sheet of gold according to Ernie's requirements. Ernie was right, with the appropriate orientation and correct folding the cube was perfectly covered in gold. Oddly enough, it must be the Christmas rush that has made me even more absent-minded than usual, I have already forgotten the measurements I made and can't even remember if I used the square or triangle. Can you help me to remember which piece I used, and the lengths I measured?

The optimal wrapping for a square has been shown to be $8\ dm^2$.

For the triangle, the almost best wrapping I could find is the following: 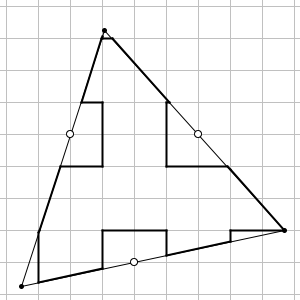 In the picture above, the grid has $5 \ cm$ squares. The triangle is constrained by 3 grid points that must lie on the 3 sides and the fact that the right vertex lies on the grid line where it seems to be. The shape that is cut out wraps exactly a cube of size $1\ dm$. The leftovers can be folded nicely.

So, in the end, it is still the triangle that wraps a cube best.

PS: The solution can be slightly improved by turning the 3 sides a bit more, counterclockwise around the 3 pivot points. The bottom edge would start eating in the tip at the right, but that could be covered by the leftover at the bottom left.

I'm pretty sure you used a square with a length of $200\sqrt{2} \approx 282.84 mm$ (total area $80000 mm^2$). The optimal wrapping of a cube in a square looks like this. I imagine the triangle will end up with more wasted surface area due to the dissimilarity of the shapes, but I haven't figured out the optimal wrapping strategy.

Not the answer you're looking for? Browse other questions tagged mathematics calculation-puzzle geometry or ask your own question.

11
Optimal present wrapping with a rectangle