Lots of ships in the arbitrarily large battleship

This question is inspired by Oray's puzzle Lots of ships in the battleship.

You have an $n\times n$ grid (a battleship board) and a certain number of $2\times2$ squares (ships) to place in the grid. The rules are, quoting from Oray's post complete with illustrative gifs, as follows:

This time, you are going to put the ships one by one shown as the example below. Every time you put a ship, it cannot share more than 1 grid with other ships. That is, it must occupy at least three empty grids. In this case,

At most how many ships can you put into the board?

Here is the wrong way playing the game where you put the green ship, it shares two grid at the same time when you put it:

The method in ffao's answer establishes an upper bound of $1+\frac{n^2-4}{3}=\frac{n^2-1}{3}$, the theoretical maximum possible number of ships that could be placed on the board.

For which values of $n$ can this maximum be achieved?

Is there a general rule for which $n$ it can be achieved and which it can't?

Firstly, instead of overwriting the overlapped square when placing a ship, we shall instead leave it as before, and only ever fill in free space. This does not change the mechanics of the puzzle but makes it easier to see certain important characteristics.

The case for $n=2^k$ can be shown to be possible (for an integer k greater than 0) by induction.

Thus, since the first case is true, and the remaining cases can be constructed by using previous cases, each $2^k$ has a minimum solution which that follows that bound.

Notice that for each solution, every battleship except the first one that is placed has only 3 free spaces when it is placed, and every cell is filled in. You can chose any ship in the solution as a starting point, as long as each time you place a ship diagonally adjacent to an existing ship There also can't be any closed loops, such as this:

An attempted proof of impossiblility for all other cases

A solution cannot exist for an odd $n$, as on any given edge, you can only ever fill in every cell on that edge except for one, as pieces that are adjacent to that edge must take up exactly two unique cells, and cannot overlap.

Suppose $n$ is some number that is not a power of two. If even, that grid can be recursively broken down into four quadrants or sub grids of equal size until there are only odd dimensional grids remaining. In order to maximise the amount of ships you need at least one ship on the boundaries, otherwise there would be at least four ships placed where there are 4 free spaces. (Each indivudual quadrant would need a starting ship).

The only way to to do this which would allow for the maximum placed ships is right at the centre, intersecting with all four grids:

Placing a ship anywhere else along the boundaries would result in exposing a 2x1 block to the two touching grids, and I believe would lead to the necessity of forming a loop, which would not be possible to place down following the new or old rules.

Now, since all grids that are not powers of two can be broken down into a problem involving an odd by odd dimension grid, and they are not solvable to the upper bound, only the grids that have the same power of two for both dimensions follow the upper bound.

The solution is built out of several 3 x n layers which look like this. Every other layer needs to be reversed so the square jutting out fits into the missing square in the layer below. For the final layer, the black tile is removed and the gray one is replaced with the initial square.

Break then $n\times n$ grid into an $n/3\times n/3$ grid of $3\times 3$ blocks. Each of these blocks will be filled with some rotation/reflection of the following shape.

Every block has a jut and a gap. The juts and gaps are hooked up to each other to form a Hamiltonian cycle of the $n/3 \times n/3$ grid.

This tiles the grid with trominoes. In order to get a valid battleship placement, expand one of the trominoes in a jut into a square, deleting the trominoe it is "hugging" in order to make room. 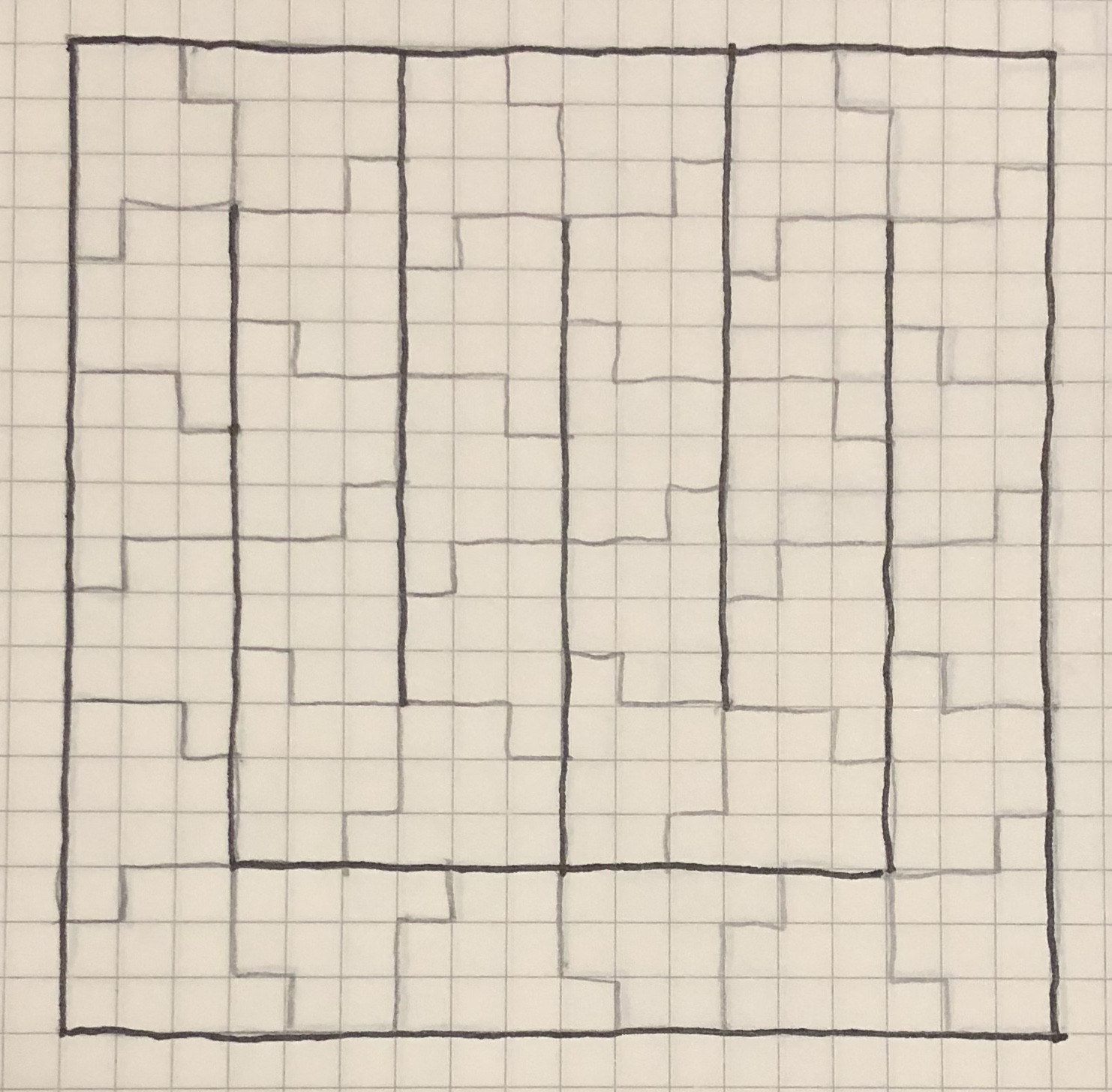 Not the answer you're looking for? Browse other questions tagged logical-deduction combinatorics or ask your own question.

9
Lots of ships in the battleship