Four points with only two distances

Your task is this:

Find all arrangements of four distinct points in the plane such that only two distances occur between them.

When you have $4$ distinct points, you can measure the distance between any two of them. There are $6$ pairs of points, so in general you can measure $6$ different distances. There are however some configurations in which several of those distances are the same. While they can't all be equidistant (at least not in the flat plane), it is possible for only $2$ distances to occur between the points.

It is easy to find one or two of these arrangements, but a little tricky to find them all, as it is very easy to overlook one. When you answer this question, please try to include some explanation for why you think you got them all.

Source: I saw this question on Colin Wright's blog, who heard it from Peter Winkler.

Consider three of the points: A,B,C. (The fourth is D.) Pick them so that as many as possible of the distances A,B,C are 1 rather than $t$.

Next, suppose ABC has two distances 1 (say AB,BC) and one distance $t$ (say AC). Again, we need D to be either 1 or $t$ away from each of A,B,C. And there mustn't be a triangle of 1s because then we'd be in the case above. So we can't have AD=BD=1 or BD=CD=1. In particular, we can't have three of the distances-to-D being 1. If two of them are 1 they must be AD and CD; there is then only one place to put D, and we can readily see that it makes BD too large. If just one is 1 and it's BD then we have an equilateral triangle ACD of side $t$, and point B is at distance 1 from all its points. Well, if B is at equal distance from all of A,C,D then there's only one place for it, namely the centre of that triangle: this again is a valid configuration but since it has $t>1$ it doesn't belong here -- and in fact we've already counted it. If just one of the distances-to-D is 1 and it's A or C (the two are obviously equivalent) then we have a valid configuration that you might recognize as four of the five vertices of a regular pentagon. Finally, the remaining possibility is that all three of the distances from D to A,B,C are $t$. This again is a valid configuration: we have a "thin" isosceles triangle with D at its circumcentre. Since ADC is 60 degrees, ABC is 30 degrees. That's two configurations here.

So ABC has just one distance 1 (note: we don't need to consider the case where ABC, chosen to have as many distances 1 as possible, has none, because that would require all six distances to be $t$, which can't happen). Let's say BC=1 while the other two distances are $t$. Now BD and CD must both be $t$ because otherwise there'd be a triangle with two distances 1. There are two ways for this to happen. Either AD is 1 (giving us a square) or AD is $t$ (giving us two equilateral triangles glued together). That's two more configurations.

six configurations in all

satisfying the given conditions. Here's a picture (the cases above appearing left to right, and top to bottom within each one): 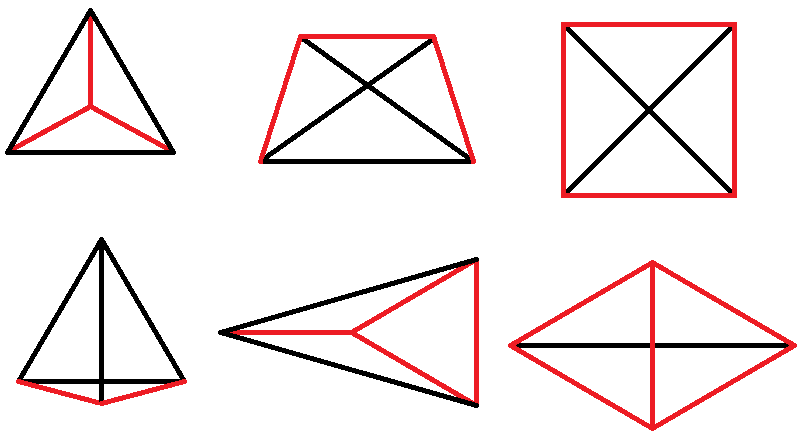 I have thought of two arrangements. The first one is

Four points in a square. The two distances are the side length and the diagonal length.

The second one is

The points of an equilateral triangle along with the center. The two distances are the side length of the triangle and the distance from a point to the center.

While doing the proof, I found two more cases:

A parallelogram that is essentially two equilateral triangles sharing a side.

The points of a trapezoid where three side lengths are equal, and the other side is the same length as the two diagonals.

Here's my incomplete proof that these are the only non-degenerate cases, along with the other two cases presented by the other answerers.

Let's say that our two distinct distances are $x$ and $y$. Then we can divide our problem into some easier subcases.

Case 1: None of the distances are $x$. Then all the points have to be identical, contrary to the problem statement.

Case 3: Two of the distances are $x$ and the other four are $y$. Then we have two more subcases:

We can draw $3$ circles of radius $y$ around $A$, $B$, and $C$. If they intersect at the same point, then we can call that point $D$ for this case. It can be shown that the orthocenter of $\triangle ABC$ is the only candidate, so when is this equidistant to all three vertices? Well, only when $\triangle ABC$ is equilateral! This is clearly a contradiction because then $x=y$. So this case can never happen either. Yeah, I messed up here, but can't figure out (mostly just too lazy) how to prove that the two other cases presented by other answerers are the only ones.

Case 3.2: The two distances $x$ correspond to lines $AB$ and $CD$ that do not share a point. Then the other four distances are $y$. It can be shown through some quick calculation that these two lines must be orthogonal. Then we are left with the square case.

Case 4: Three of the distances are $x$. This manifests itself as either a path of length $x$ or an equilateral triangle. If it's an equilateral triangle, then the other point can only be the center, and we've already seen this case. If it's a path, then we have a trapezoid shape where the diagonals are the same length as one of the sides. So this is a new case that I didn't think of originally!

Case 5: More than four of the distances are $x$. Then we can just swap $x$ and $y$ and we have one of the previous cases.

Barring the degenerate cases with coinciding points, I got

1: a square
the rest have an equilateral triangle with the remaining point at
2: the center
3: the missing point from trapezoid
4: the point midway between two points, on a circle whose center is the third point
5: point 4 mirrored to the other side of the third point

I don't think you need a picture of a square, so here are the rest of the patterns, all in the same picture. The big black dots are shared by all of them. The points are placed by hand, sorry about any inaccuracies. 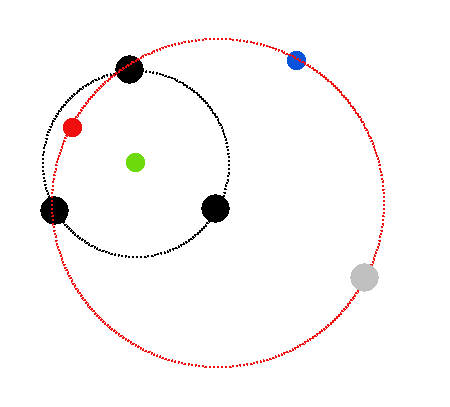 These should cover all the cases, because

when starting with an equilateral triangle of side a, the fourth point can be at distance a from 0, 1 or 2 of the points. The "mirror image" of the centre point is at infinity, and the mirror image of the blue trapezoid point coincides with another point, so the four points are all we can get from the triangle.

If starting with anything else than an equilateral triangle (and barring any solutions that include one, since they are already covered), it's possible to place the third point at distance a from either 1 or 0 of the first points, and at least the latter case clearly (EDIT: not so clearly after all) forces a square. (I'm not absolutely certain about the former, though.)

EDIT: as it happens, the point of uncertainty contained the solution OP probably meant as being easy to overlook. Surely you can understand why I chose this particular way of depicting it. 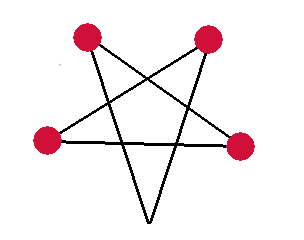 Take a regular pentagon. We know that the sides are equal. 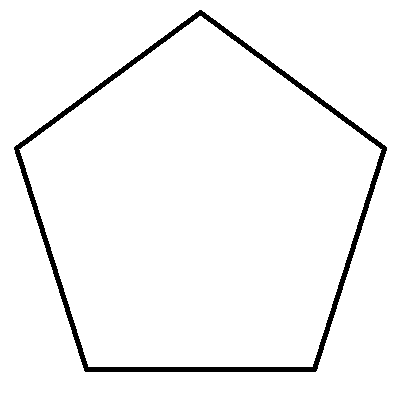 We then find the diagonals which will also be equal. 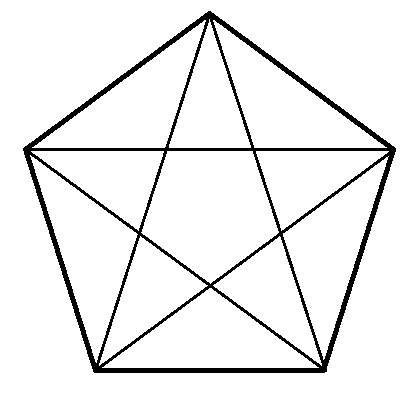 Now we remove a vertix. 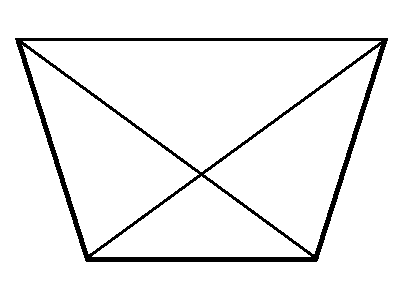 Now the three diagonals are equal and so three are the sides of the (previously) regular pentagon. Therefore this new figure has exactly can be created by exactly four points with two distances between them.

Note: This logic was not developed by me. I had come across this logic few months(or years?) ago on Quora.