And what is the way to put them?
Of course the blocks can't overlap.

I just remembered this nice simple puzzle and I'm surprised it's not posted yet by anyone here (CMIIW).

Here's a visualization, thanks @JaapScherphuis for linking to the Wikipedia article: 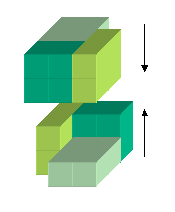 (picture by JocK, published on Wikipedia)

The answer has already been given, so this is mainly to give more background information about the puzzle.

It is called the Slothouber–Graatsma puzzle.

It is often attributed to the mathematician John Conway, because it was published in the book Winning Ways. A commercial version called "Pack It In" was produced in 2003 by Binary Arts (who are now called ThinkFun). You can see this version (with its solution) at this link:

which is a page on Jim Storer's puzzle site.

Here is a little bit of analysis:

6 of those blocks have a total volume of 24 unit cubes, so assuming they can be packed into the 3x3x3 cube, exactly 3 unit cubes will remain empty.
Whichever orientation a 2x2x1 block is placed, it will always fill an even number of the 9 small cubes in each layer.
Furthermore, if you give a layer checker-board colouring, the 2x2x1 blocks will always cover the same number of each colour, so the empty spot must lie in the centre or at a corner of that layer.


You can apply the above reasoning not just for each layer, but also for each vertical slice of the 3x3x3 cube in any direction. Every layer/slice must have at least one empty space, and because we have only three, they must have exactly one each. The only way to accomplish that with the space at the corner or centre of each layer/slice is to have the three empty spaces go along a main diagonal of the 3x3x3 cube. It turns out that this provides a solution, i.e. six 2x2x1 blocks can fill the 3x3x3 cube apart from three spaces along a main diagonal.

Conway did extend the idea above to larger puzzles, in particular a 5x5x5 packing puzzle, rightfully called the Conway Puzzle. If you apply the spoilered analysis to that puzzle it becomes much easier to solve.

Put one in face of each face. The single thing to be careful of is to have for 2 opposites faces (top and down for example) a shift that would left the 6th.

Not the answer you're looking for? Browse other questions tagged three-dimensional or ask your own question.

22
Martin Gardner's "The Twiddled Bolts"
21
These alien safes have no end
9
Knight's Tour on a cube surface
8
Improve my 3D puzzle to have a single solution
8
Restoring 3D Tetromino Puzzle
10
A Difficult Rhombicosidodecahedron Slitherlink
10
3D Slitherlink (Slithersurface)
25
Two chunky pixelated X's locked in mortal combat!
0
How many L-shaped pieces will not be used to make cubes?
1
How to arrange a set of cubes to get a tower of two?