Notes: (1) is from "The Art of Mathematics: Coffee Time in Memphis" by Bollobás, and is very satisfying to solve in my opinion. (2) is "original", though I imagine someone has come up with these before me. It has a similarly nice solution I think. Note: I edited out a third question to address Daniel Schepler's point below.

Here is a somewhat sketch proof for (1) that may be missing some less obvious details: 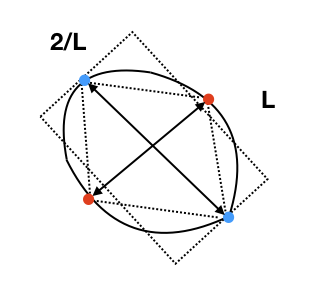 ...assume for contradiction that there exists a figure which cannot be contained in the rectangle. This mean that there exists two points with distance $d > \frac{2}{L}$ along the perpendicular axis. Two reach these points, yielding the smallest area (to maximize the distance, we need to minimize the area), to keep the convex property, these must be straight lines. Now, the area of this figure is $A = d \times \frac{2}{L}$. Hence $d > \frac{2}{L}$, so $A > 1$. But $A = 1$, so we have a contradiction.

...but basically the same argument as above. Pick three points along the boundary of the figure and draw a triangle, so that the area of the triangle is maximized, let the area by $A$. Then draw another larger equilateral triangle which has size $4 \times A$ in the other direction 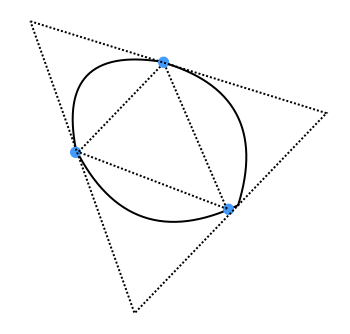 Here is a trivial proof for part 2.

The legs of the triangle are twice the length of the sides of the rectangle.

Since I usually prefer no-math solutions for geometry problems, here's one for question 1.

First, clamp the convex thingy between two verticals. The verticals are on springs, and will tightly press against whatever is between them.

Then, rotate the convex thingy until the distance between the verticals is as big as it gets, or in other words, the longest diameter is horizontal. (This is important, since for this particular proof, we want to have the thing touching both the verticals at points that are on the same horizontal line.)

Now, the lines form a rectangle around the thingy. If the thingy was a triangle, it will look like this: 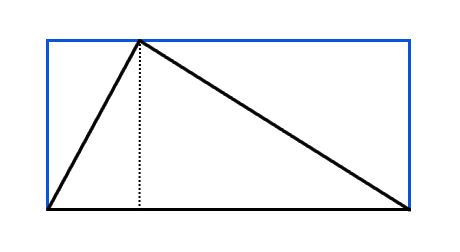 If the convex thingy has a more complex shape, it's all the better for us: 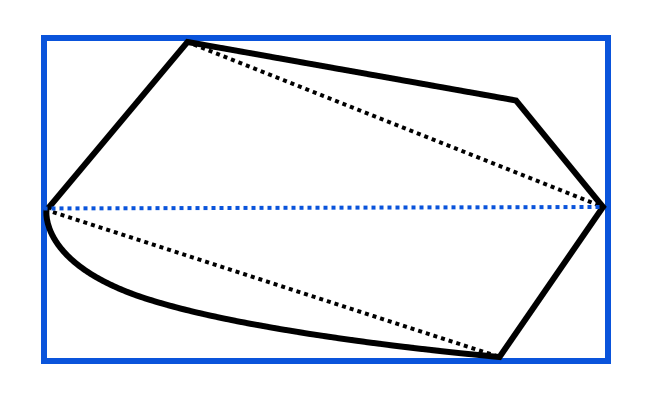 In the image, I have split the thingy along the maximal diameter, which is horizontal, because that's how we aligned the thingy.

For question 2, we can copy the rectangle that is not larger than 2, split the copy along a diagonal, and assemble a triangle out of the pieces, like @Jaap has already done.