Alice needs a strong password, but she has terrible memory - so she have decided to hide it in a Rubik's cube she happens to carry around all the time

Can you get Alice password just by knowing the side with red center? 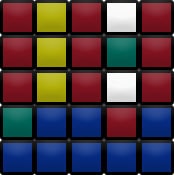 Using the description in the question, I wasn't able to decide which way is "up" on the white side, so I would have to take four guesses, but I think the cube looks like this: 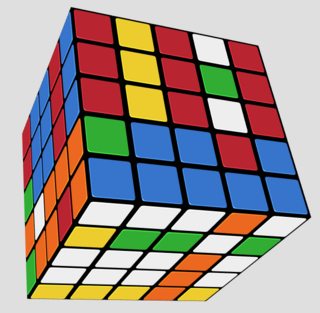 This is probably unique, my Most Rigorous proof is that it was pretty damn difficult to get there in 7 moves :-)

Here are the 7 moves: (with the cube upside down, because that's how the simulator I used places the initial cube.)

The third and the fourth move can be done in a different order, of course, but that still produces an identical cube. Any other changes to the sequence would not produce the required red side. The only other variations I found that get anywhere are

Sadly, it is only possible to get a (partially) mirrored version of the required pattern in any of those ways. (Proof: spent way too much time trying to make it work.)

Therefore, if there is another way to construct the red face in 7 moves, it has to be with some completely different moves altogether.

It is better if Alice stores her password on a 3x3, as we can

Guess of the centers, as they are fixed, and find out the other pieces, by tracing the 7 turns, and just having one face as the input after that.

The number of possible slice moves increases, and also the the centers of two kinds (x centers at the corner fringe, and + centers at the edge fringe), cannot be deduced, even if you are given the information of 5 sides, and one side is hidden.

That there are nifty amount of 2-cycles that can be put up on this centers, making them untraceable unless we have the visual of all the 6 sides.

On the other hand

, has 4x10^17 possibilies, letting us store even a 10 digit ASCII code password quite easily, if we form a map between each state, and a string of ASCII characters (this will be a tedious task), but a 3x3, or multiple 3x3, solves the problem.

Then there is one more fantastic solution, you can have 2 cube states added onto a single 3x3 cube : eg, U D M B' U' S R' S' R U B M' U' D' + F E F2 R' S' R S R' E' R F, and you can retrieve it by some computational factoring algorithm, the same way we try to factorise big prime numbers during encryption.

Not the answer you're looking for? Browse other questions tagged password rubiks-cube or ask your own question.