Can you solve the cipher on this poster? 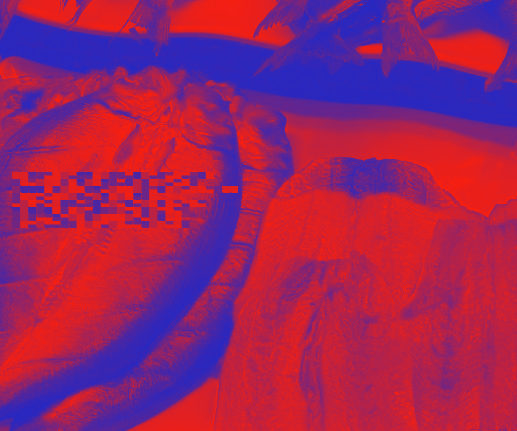 It looks like it was made in a factory 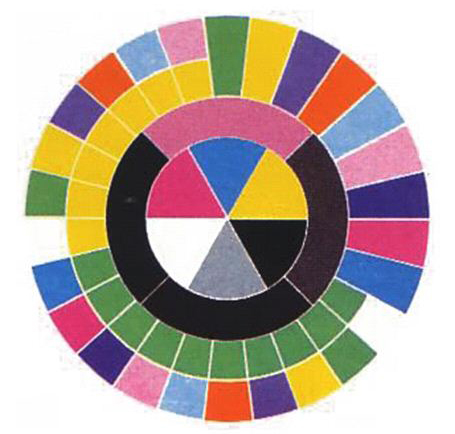 After a quick google search by image upload I came across an image representing the third hint. It is referred to as the..

The painting of hint 2 is actually..

..the album cover for Power Corruption and Lies by New Order.

According to the internet, the colours are to be decoded using only the outer two rings of the image in the third hint. The inner segments are for decoration only. The alphabet starts with the double depth green at the top and works round clockwise. Luckily, the image I found contains a table with colours and their respective letters. This is lucky because I'm lazy.

After noticing the colour decoding image doesn't include gray, I'm going to assume that it equals a space. Each row consists of either 1 or 2 colours, doubled up with either itself, green or yellow. It's VERY hard to see whether a block is entirely green/yellow or composed of 2 green/yellow half ones.

The decoded message is...

Where '-' indicates a line break in the code.

I tried using ROT 1 through 25 to try and decode that gibberish, but to no avail. Anyone willing to try? Be aware that I might have made some mistakes in decoding the code, especially with b's and v's (single yellow or two yellows) and a's and k's (1 or 2 green ones).

I don't know the cipher, but the image looks like

A thermographic camera of a bunch of fishes

Maybe in a factory as OP said

Not the answer you're looking for? Browse other questions tagged cipher visual steganography or ask your own question.

5
Find the secret phrase in this encrypted image (Part 4)
3
Decode Voyager's Message to Aliens
18
Jump to the 13th dimension
22
This is an opportunity. Can you take it?
11
Steganographic Maze of Ciphers, Riddles and Rhyme!
15
The Third Room of Numbers Dungeon
9
A Great Adventure! - Part 1
11
A Puzzling Cipher: Redux
7
A hexagon cipher
18
Can you solve this Rubik's cube from inside of it?