The game 2048 can be thought as a two player game, where one player shifts the table around to get to the 2048 tile, while the other player tries to hinder them by putting down 2s and 4s on the table. While the original game will put down the tiles randomly there are variants, such as some where this is not random, and also some where you are the one putting down the tiles, and the computer will shift the table around (not to mention the general one, where you can play both sides).

Theoretically, the worst situation is the following table, but for this the player shifting the table has to play really badly.

If however both players play flawlessly against each other, then what is the highest tile that the shifting player can achieve?

When playing deterministic 2048, where a new tile is placed in the first available spot, you can get a pattern like this using left-down-left-down: 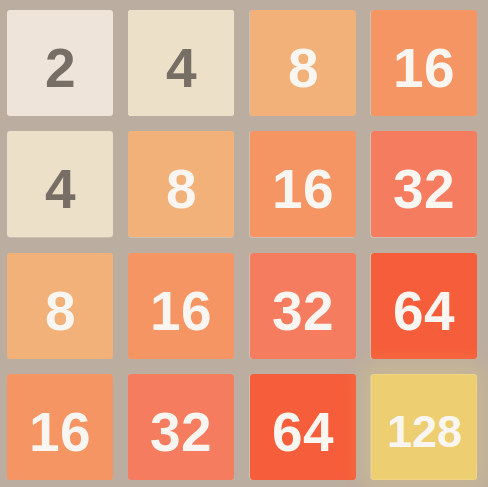 The worst I have been able to get in regular 2048 is this: 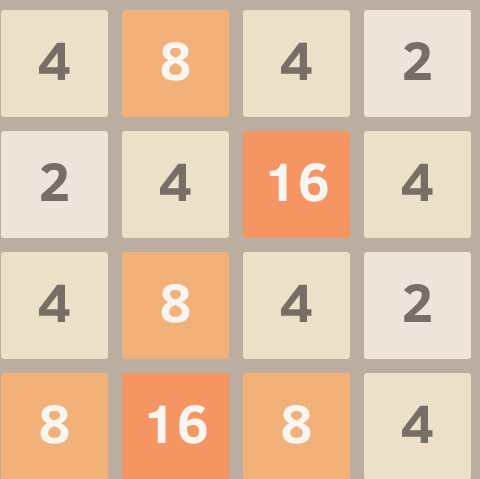 It is possible to get that worst-case scenario if your tile generator and human are working together to do so.

Not the answer you're looking for? Browse other questions tagged 2048-game game or ask your own question.

8
2048 - Maximum score that doesn't rely on luck
56
Left coin, right coin, last coin?
8
Thirteen coins game
5
Largest tile possible in 1597 (2048 with Fibonacci numbers)
14
Removing chips from the table
7
Removing green marbles from the table
0
In a 2048 game, what's the smallest sum of the bottom 3 rows when the top row is filled?
2
Word game - possible to play all words?
11
Can the score be deduced from the position in 2048?