A 3x3 magic square is a 3x3 grid containing the numbers 1-9 once each, and in which every row, column, and diagonal sums to 15:

And I presume we all know the rules to Sudoku.

This solution also has a magic square in the top-left corner. However, notice that it isn't perfectly aligned with one of the nine 3x3 squares that are considered when solving Sudoku. Instead, it's a column to the right of the edge.

This is a two-part answer. First, it establishes a non-trivial upper bound of 5. Then a solution is given that proves 5 is also the lower bound.

There is only one 3x3 magic square, up to symmetry:

So in order to have seven magic squares in a Sudoku, we require seven 5s which aren't against an edge, and that requires two diagonally opposite corners to be 5s. If we then look at parity (e for even, o for odd):

By Sudoku rules there are two possible places for the 5 in the top-right block, but the parity matching prohibits the 5s from the magic squares being horizontally or vertically adjacent to an even number, so there's only one possible place:

The 5 in the right-centre block is similarly forced; then the one in the centre block;

and we can't place any 5 in the left-centre block.

With the aid of a computer to check the 576 cases, this simple parity matching eliminates all but one of them:

If we zoom in on the top-left 3 blocks:

If we look for solutions with 6 magic squares we keep one 5 in a corner and allow the others to vary. There are 29 positions of 5s which satisfy the parity check, and they all fail to the same kind of blockage between overlapping magic squares. So the upper bound for a solution is 5. 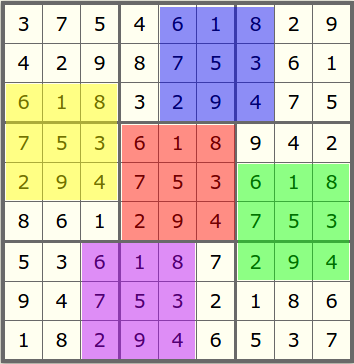 I found a template for this at http://www.sachsentext.de. Filling it in was a pain, but it's much easier once you realize that rotating/reflecting any of the magic squares causes it to break. Then you just have to fill in the "non-magic" spaces, which isn't much different than a regular sudoku board with a ton of givens.

This isn't quite strong enough to avoid false positives, but it narrows down the field considerably. With these extra constraints, and iterating over the possible positions of "internal" fives, I find 64 grids. Interestingly, some include "internal" fives which aren't from magic squares: e.g.

All of the ones I've checked have the same (IMO) structural defect that the magic squares are all in the same orientation. I haven't checked, but I think they may also all have a symmetry under rotation by 180 degrees and permutation of digits by $(19)(28)(37)(46)$.

Not the answer you're looking for? Browse other questions tagged logical-deduction sudoku magic-square or ask your own question.

4
Are there any sudoku puzzles combined with magic squares?
13
How do you create a general locked-box problem?