Break the subsitution cipher with a twist

Here's an example. Suppose that the secret substitution was "move forward 1 in the alphabet". Then the naive substitution would encode "aaa! aa!" by "bbb! bb!". But our new method encodes it to "bcd! ef!" The same letter gets encoded differently every time. And the substitution needn't be this simple. It could be any permutation of the 26 English letters. Take that, NSA!

Anyway, break this cipher. The plaintext is a poem (not written by me) in plain English. The substitution was chosen uniformly at random from all 26! permutations. The algorithm is exactly as described above. I will give upvotes to partial answers, especially theoretical suggestions for attacking the cipher.

Scroll to the end if you just want the answer. I give a detailed explanation of how I reached it.

First, I hypothesized that the permutation has two cycles: one of length 9, and one length 17. The length-17 one contains T and R, and the length-9 one contains E. How did I get there?

To check the theory, I took every 17th letter of the ciphertext

Those sure are nicer letters than usual. Which makes sense, since if there were a cycle of 17, then all 17 letters in that cycle would map to themselves in every 17th position, and so take on their natural frequencies.

And taking every 9th letter,

In fact, this suggests a general method to find the cycle sizes. To test a cycle-length n, take every n'th letter, and see how well those letters correspond to the English distribution. Here, I measured this by taking the average English-letter frequency of each letter appearing. 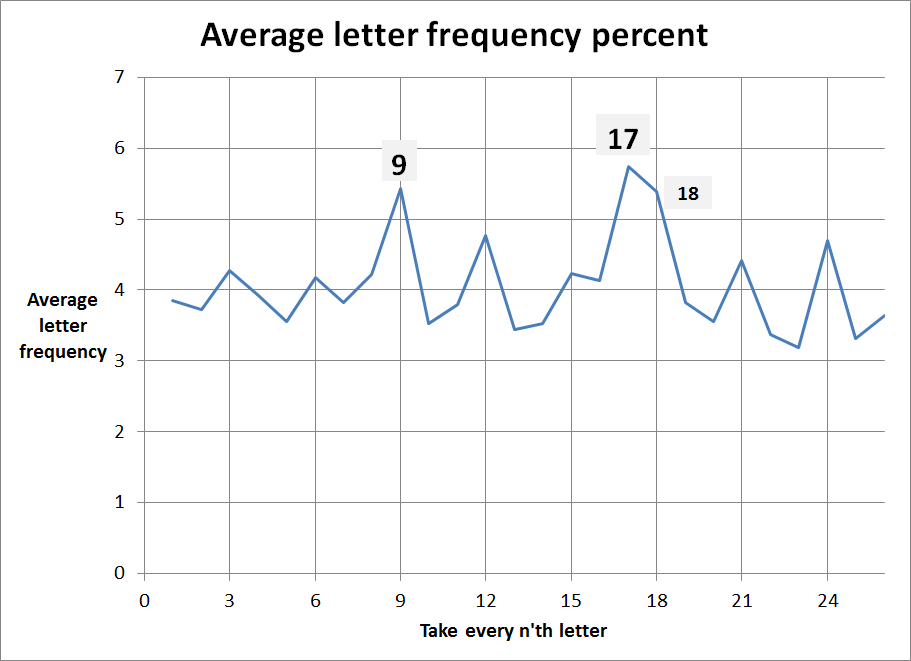 The gives the claimed cycle EPDKBIDWF. They're similar to the letters in richardb's analysis But they can't be totally right: D appears twice. Though E is the most common letter in English, that might fail to be the case in a random sample of letters, so some of these will be wrong. I guessed that the second D is wrong and replaced it with the filler character *.

Knowing the nine-cycle let me decrypt all the letters that are part of it. This gave:

So, there's clearly many things wrong; the K's look off in particular. But, there's segments of recognizable text. Particular useful is the last line, which contains "B- EDW--- FIE-D", which I guessed was "By Edward Field." Perfect, that's the name of a poet! It also means the letters EDWFI are right.

I looked for a word that had lots of those. There was the third word "FE---E-K". The K is surely wrong, and plugging the pattern into a regexp matcher gave the very plausible word "FEATHERS".

Finally, Googling "edward field feathers" was enough to take be to the poem Icarus whose text clearly matched.

I'm taking it as given per xnor's analysis that the substitution forms two cycles, of length 9 and length 17.

For each letter I've calculated the frequency at each position mod 9 and mod 17, and summed the squares to give a crude autocorrelation figure of merit. 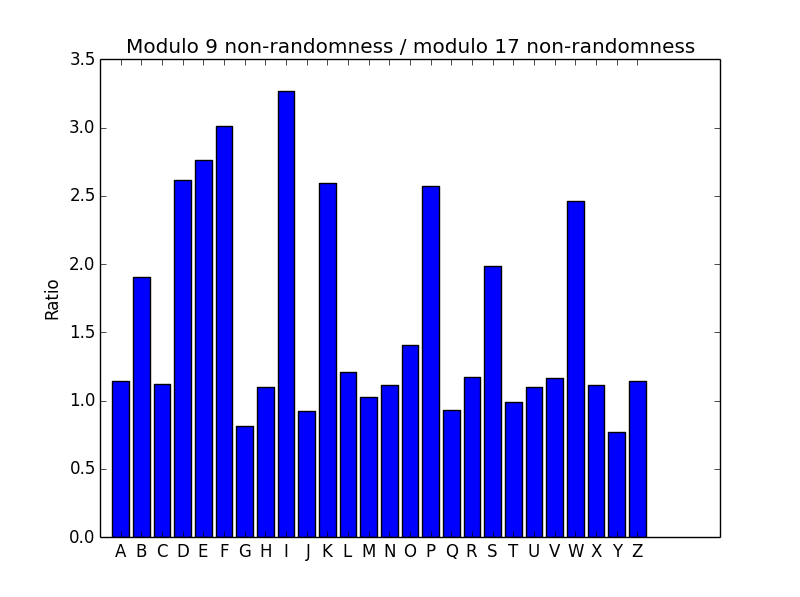 Gratifyingly, there are 9 bars that have a good fit, from which I tentatively conclude that the cycles are: ACGHJLMNOQRTUVXYZ and BDEFIKPSW.

The next step could be to try to assign an order to BDEFIKPSW which maximises the overall autocorrelation. With such a large ciphertext, you can get a long way with just maths without bringing in English frequency tables.

Let's assume the frequency analysis done by xnor and richardb is correct, so that the permutation of the alphabet that we are using has a 9-cycle consisting of the list of letters B, D, E, F, I, K, P, S, W (we won't need to assume the existence of a 17-cycle). This means every ciphertext letter on this list corresponds to a plaintext letter on this list, and vice-versa.

For some of the longer ciphertext words, this alone is enough to recover the plaintext, which I determined with a regex dictionary search. For example, the ciphertext JHJUMKXWVEJBFLL can only come from the plaintext uncomprehending. Similarly, UDKIIUXLBXD must come from respectable, and WKKVJNYMMYR comes from spectacular (or spectrogram, but I considered this unlikely).

A Google search for 'poem uncomprehending respectable spectacular' turns up Edward Fields' poem Icarus, which is seen to be a match.

Not the answer you're looking for? Browse other questions tagged cipher encoded-message cryptography or ask your own question.

17
Let's break PolynumCrypt
8
The Cardboard Box Cipher
3
Cipher that I need help solving
4
Encrypting with a substitution cipher
5
Cipher: No idea where to begin
1
Transpostion cipher help
0
Can you crack this mod of the Caesar cipher?