How do you even read these runes? 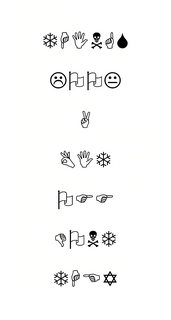 As described in Gareth's answer (go upvote that if you haven't already), the first step is to notice that:

the white background isn't all quite white, and a bit of colour remapping produces this image.

From there, a bit of cryptogram work led us to what was written in the texts, as well as the scripts they were written in:

Alphabet: Human Alphabet in "Is It Wrong to Try to Pick Up Girls in a Dungeon?"
SHADOW ANGEL: main antagonists of Genesis of Aquarion
LEAD WEAPON IN CLUE: pipe

Alphabet: Unovian Alphabet (Pokémon)
ORARIO: City in Is It Wrong to Try to Pick Up Girls in a Dungeon?
MUSICAL BUILDUP OF LOUDNESS: crescendo

We can notice that for each block of text,

The first line refers to one of the anime the scripts come from, and the second line gives a word that represents a symbol. For instance, solidus is another name for slash, and the mathematical symbol for union is ∪.

Then @Deusovi brilliantly noticed that

The symbols described are all part of the Moon type writing system, giving the letters, in order: HIMTEEKIVUDS

The final step is to

Reorder the blocks in a cycle, in which the anime reference for one block is where the alphabet for the next block in the cycle comes from. The starting point of the cycle is the Luna Alphabet block, as indicated by the arrow pointing to it in the image. Doing so gives us the letters TSUKIHIME DEV:

Giving us the final answer...

As a side note,

The initials to this puzzle's title, Unintelligible Batch of Wingdinglish, are the same as those of Unlimited Blade Works, another TYPE-MOON creation.

THINGS LOOK A BIT OFF DONT THEY

replace each wingding character with the character at the same code point in the ordinary ASCII character set.

This isn't all; it turns out that

the white background isn't all quite white, and a bit of colour-remapping produces this: 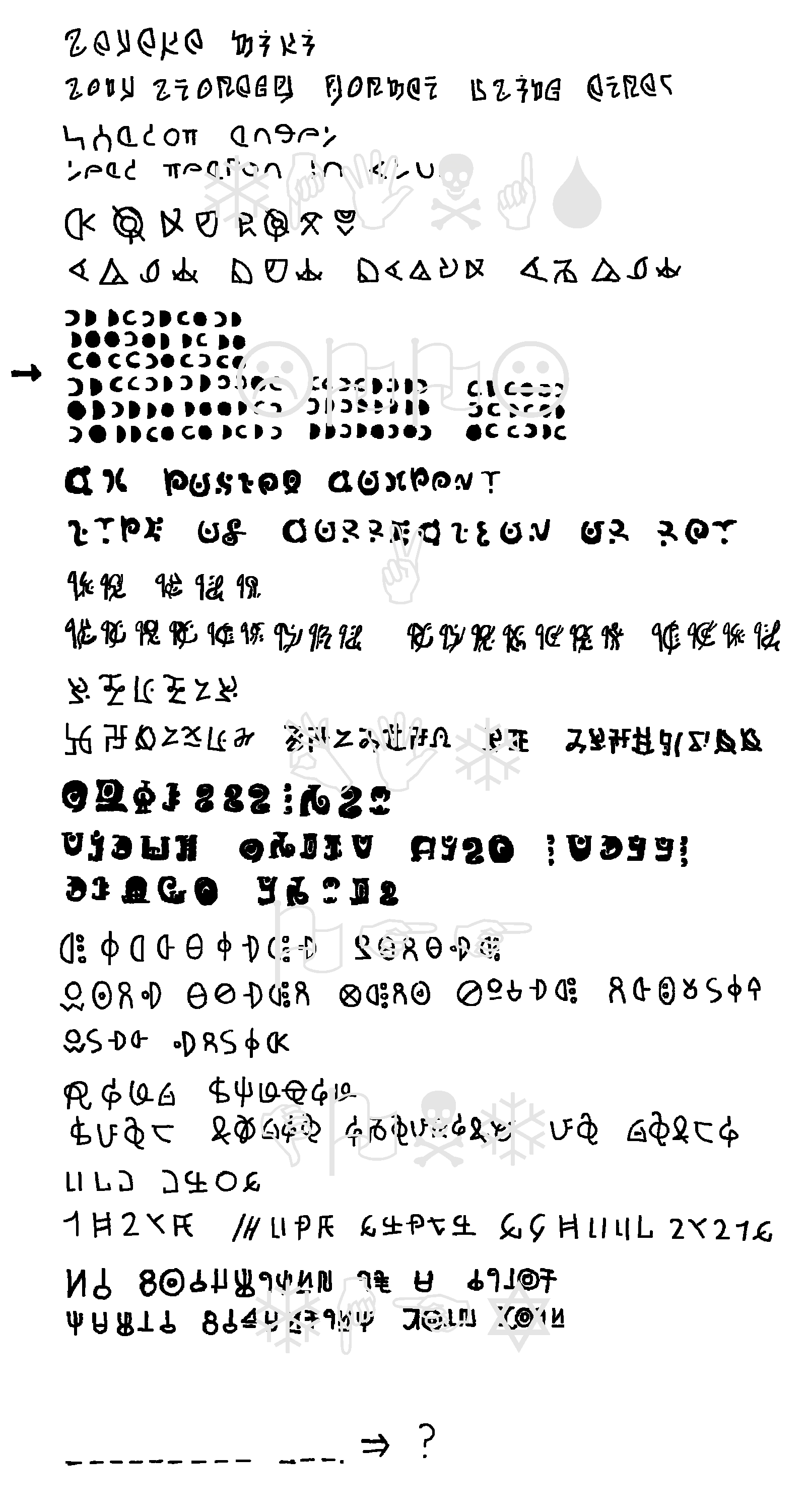 transcribing all of this and either treating it as cryptograms or identifying whatever (presumably artificial) scripts they use seems ... more like work than fun. If I find the energy to decipher any of it, I will report here :-).

seem to be letter-for-letter transcriptions of (more or less) English text, with the symbols used here often somewhat resembling the corresponding ones in our familiar Latin alphabet.

Pretty sure this says SAYAKA MIKI / SONY STORAGE FORMAT USING ATRAC. First part is an anime character, who is apparently known to fans of the anime as "Blue"; second perhaps "MiniDisc".

Looks like SHADOW ANGEL / LEAD WEAPON IN CLU. First might be "demon" or something; second perhaps "pipe" if we assume there's an omitted "e". (Thanks to F1Krazy for getting started on this one.)

Block 3: (not really looked at yet)

Block 4: (not really looked at yet, but)

I suspect the individual "characters" here may be vertical groups of three symbols rather than single symbols.

Looks like CM POSTAL COMPANY / TYPE OF CORRECTION OR RAY. Second bit is probably GAMMA (thanks @ffao; I had had a strictly inferior idea for that).

Block 6: (not really looked at yet)

Block 7: (not really looked at yet)

Block 8: (not really looked at yet, but)

one word appears to have three successive "S" characters (if that's what they are) which is ... unusual. Also, one word looks a lot like ALSO.

qiupqiup seems to think this should say ENCHANTED PARADE / WORD AFTER ZERO FLUTE RHYMING / WITH DRINK; if so, presumably it's three things divided differently: enchanted parade, word after zero (tolerance? one? gravity? ...), flute rhyming with drink. 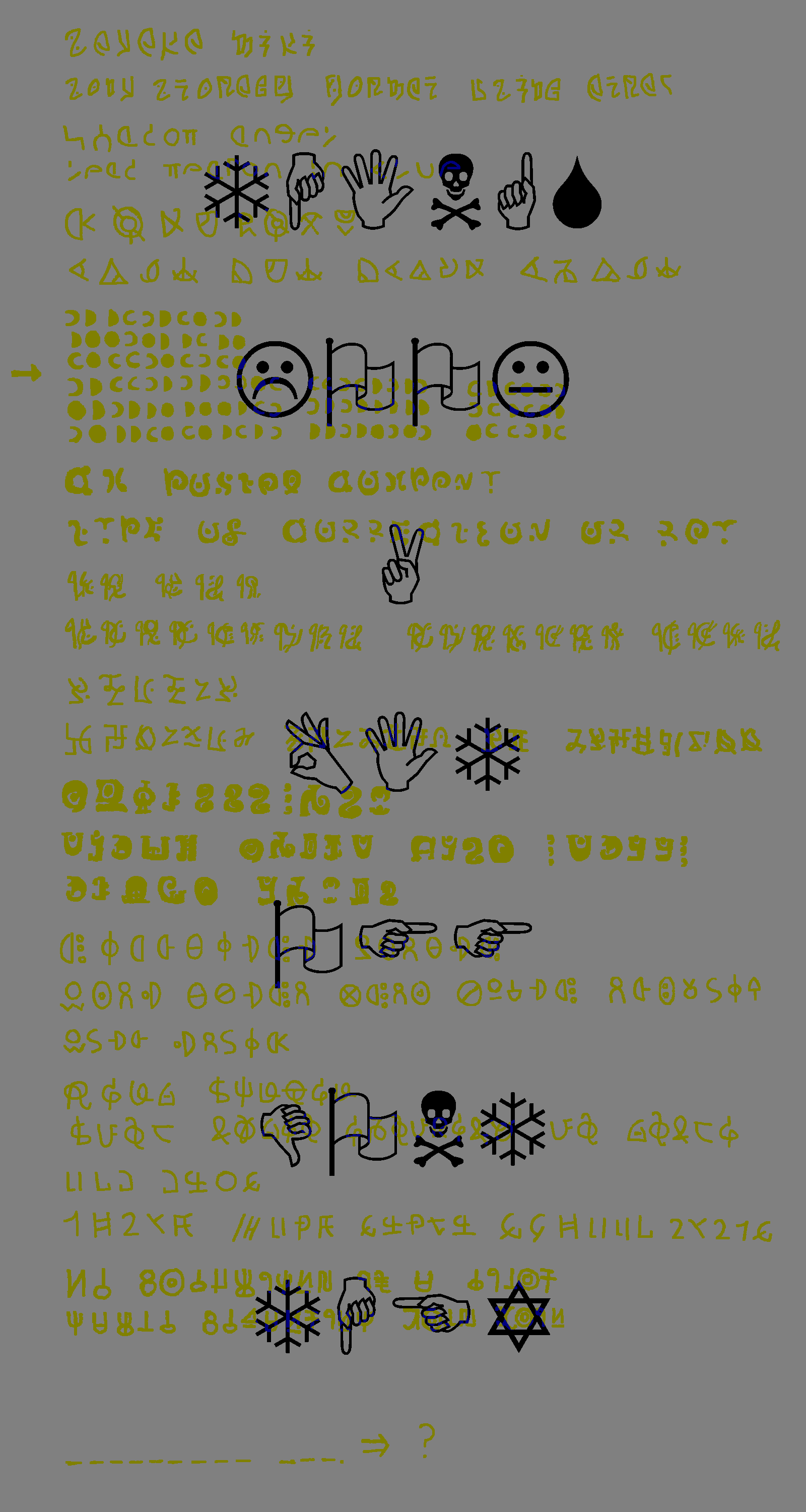 However these runes currently elude me...

The fifth block appears to say:

Wrap-up: The Making Of Unintelligible Batch of Wingdinglish

Just a number of comments not covered by the other answers, and also some background.

- This puzzle's presentation is intended to be a mega version of this puzzle by @Rubio, posted two days earlier.

- Wingdinglish is a reference to this TVTropes page, which as of writing mentions two of the alphabets used.

- @Fifth_H0r5eman's answer makes this slightly more obvious than @Gareth McCaughan's, but in addition to the white pixels, some of the black pixels are one bit off.

- Some of these alphabets have been turned into useable fonts by fans. Whilst using such fonts would improve readability, it would look odd if half the puzzle was tablet-drawn, even if the alternative meant wrangling with Imanity-go.

- Some candidate alphabets had to be cut due to mapping to Japanese kana instead of English letters, or due to difficulty of research.

- Alphabet selection was influenced by how much I verified and trusted the charts used. Primary sources were preferable but usually not available, alas.

- @Deusovi managed to skip this step, but reading the first lines in chain order (ELSIE, MY BOYFRIEND IS A PILOT, ...) spells out EMBOSSED CODE.

- Due to the first letters restriction, assigning good first-line clues proved surprisingly tricky, especially due to not being familiar with some of the series involved. As such some clues ended up referencing a franchise rather than the specific entry within the franchise, e.g. SHADOW ANGEL is more a reference to Genesis of Aquarion, rather than its sequel Aquarion EVOL which provides the alphabet used.

- At least one clue was scrapped to avoid solvers potentially researching their way into spoilers, even though it would have improved the puzzle.

- At least one clue was tweaked due to different circulated fan charts conflicting on the character used.

- As @ffao points out, the title initals UBW is a reference to Unlimited Blade Works, part of the Fate universe by Type-Moon.

15
When was this marvelous thing first invented?

57
A puzzling image maze!
22
This is an opportunity. Can you take it?
22
Who stole the diamond?
6
The ancient Japanese runes
15
The Definition of Insanity
8
A Puzzle Squared
29
A piece of Colourful Language
16
Puzzling is a Forte of Mine
16
I'm Back…!
23
Jail-Maze Crescendo: On charting a dot-path home