Can it arrive at a position where everywhere is south?

Since we know that earth is not flat, I'll answer :

over the Atlantic ocean 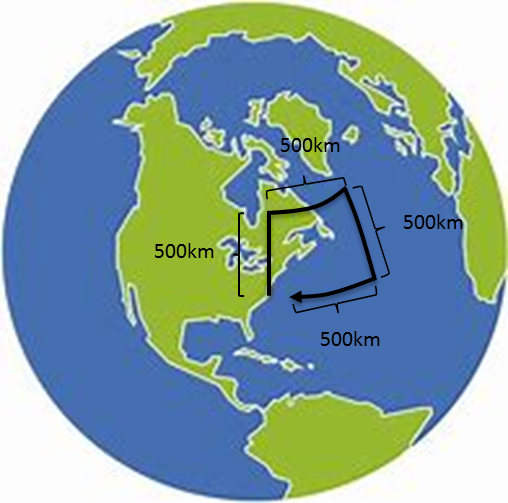 Assuming no fuel issues, the helicopter is about 37 km east of its starting position.

New Jersey is roughly on the 40th parallel, and 500km is about 1/80 of the way around the world (according to the old definition of the metre, it's exactly so), so the point 500 km to the north of NJ is roughly at latitude 44.5°N.

Therefore, the 500 km east are scaled up to 537 km during the southward portion of the trip, from which you can subtract the 500 km to arrive at the solution.

it crashed, because there's no way an helicopter can fly 2000km without refill

also "everywhere is a south" means

north pole, because at north pole, whatever the direction you look at, you will be facing south

In the Atlantic Ocean because the earth is not flat. The 500km move to the east closer to the pole is not equivalent to the movement to the west: the helicopter should be more in the east than initially.

Not the answer you're looking for? Browse other questions tagged logical-deduction lateral-thinking real or ask your own question.

6
rescue operation - where is your partner?
6
The directions from another language?
39
An old picture puzzle
1
In which city you are?
9
A Grave Issue Discovered
3
Perambulating ants 2
6
42 lines on a chessboard with associated numbers