It'd be on an infinite board, but he can't fit one in his hideout

This is a fairly easy one (at least as this website goes) with a premise taken from the Reader's Digest Book of Puzzles & Brain Teasers.

The Riddler is devising yet another trap for Batman to prove that once and for all that he has the superior intellect. Once he has the Caped Crusader at his mercy, he will challenge him to a game, as follows:

Take a chessboard-like board of squares, eight squares by eight. The two players take turns laying down tokens. Each token must be placed down so that there is not one full square that represents the halfway point between the token being played and any token already on the board. For example: 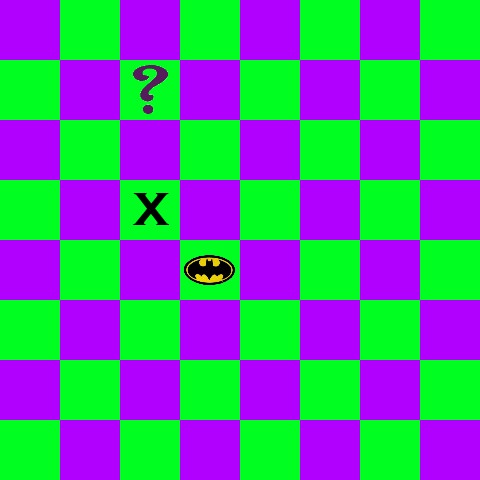 When one player cannot play any more tokens that satisfy the rule, the game is over and the other player has won.

This being the Riddler, he wants to win every time he plays. So, the question is...

What's the winning strategy for this game?

The winning strategy is

they always win after the fourth move, no matter what!

Consider the row and column parities. Two squares have an "average square" if and only if both rows are the same parity and both columns are the same parity. So, once one person plays on (odd, even), nobody else can, and a similar situation holds for all four combinations. There are only four possible options for the row and column parities, so after the fourth move, it will be impossible to play.

The winner of this game is:

The second player to move.

After each of second player's move (also in the beginning of the game): the possible positions that can be put is symmetrical.

Not the answer you're looking for? Browse other questions tagged logical-deduction game or ask your own question.