The Greedy Box (Or: Another crazy guard offering his prisoners freedom)

Two prisoners, in separate cells, are watched over by one eccentric and whimsical guard. One day he (inevitably) decides to give the prisoners a chance to earn their freedom by playing a game with them. The game works as follows: 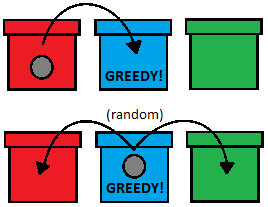 Each day, when the guard has finished his delivery and the prisoner sees which box contains the stone, she has the option of pointing to the box she believes is the 'Greedy' box that day. If she does this and is correct, both prisoners go free. If she is wrong though, the game is over, and both remain imprisoned for eternity, forced to endure more of this crazy guard and his 'games'. They both understand all these rules, and are given just one chance to communicate beforehand to come up with a strategy.

How can they devise a plan to guarantee their freedom? And - more to the point - how can they do so in the fewest number of days, so they spend as little time with this maniac as possible?

A couple of notes:

The following strategy gives the prisoners a way to escape in...

Selecting a box for sending the rock

Label the box selected by the first prisoner on the first day as A. Since the rock always switches boxes in transit, we can label the box the second prisoner receives the rock in as B and the remaining box as C.

Since the greedy box always holds the rock either when taken by the guard or when he delivers it, we know that C was not the greedy box on the first day. That leaves four possible orders for the greedy boxes: ABC, ACB, BAC, or BCA.

On day 2, B is always chosen and the rock is delivered in either A or C.

We can analyze the possible deliveries for day 4 after C is delivered on day 2.

Neither of the remaining permuations, ABC nor BCA, has A as the greedy box on day 5. So choosing A allows the rock to be delivered in the greedy box that day.

__Note:__This strategy is not optimal. It could be slightly improved by selecting A on day 4 if the rock is delivered in C. There may be even better improvements available.

The following Python script implements the strategy, validates the guesses, and calculates the average number of days.

There is one relatively simple way to solve this, but I doubt it's 100% optimal...

Prisoner 1 always puts the rock in the same box

Without loss of generality, let's assume she's always putting it in box A. After the first 5 days, Prisoner 2 notices that one box hasn't had the rock yet, when passed to her.

Here are all the possibilities of orders that Prisoner 2 sees:
BBC, BCB, CBB, CCB, CBC, BCC

Then Prisoner 2 knows that whichever box got the rock once over the first 3 of her days, that box was the greedy box. (e.g. BBC -> C was greedy on day 5)
Prisoner 2 can now wait at until the day she is sure about repeats and she can guarantee their freedom.

I believe this can be solved in no worse than

Prisoner 1 (P1 henceforth) picks a random box on day 1, since it's established the method of distinguishing the boxes is unknown a priori and hence boxes cannot be preselected. P1 can thus do no better than pick randomly.

On day 2, prisoner 2 (P2) puts the stone in the same box she received it in on day 1. This is better than a random choice as it gives P1 information about what box the stone ended up in on day 1.

On subsequent days, they continue to stick with their respective choices.

After receiving the stone three times, the stone will have appeared in one box twice and one box once. The box it doesn't appear in is the one the other prisoner selected, and the box it appears in once is the greedy box on that same day it appeared there, as also noted in kevin_ten11's answer.

So if a prisoner sees the stone in boxes AAB on their first three times, they can instantly solve since they know B is greedy today. If they see BAA or ABA they don't know based on the boxes alone if A or C is greedy today (but they know B was greedy either 4 or 2 days ago respectively).

Assume without loss of generality that the greedy boxes cycle ABCABCABC... There are then four cases in terms of which boxes the prisoners put their stones in:


P2 doesn't have enough information to solve on day 5; all she knows is that C is greedy on day 3/6. In general P2 has much less information on day 5 than P1 has on day 6. All P2 knows by day 5 is which box P1 chose and the greedy box on one day of the cycle; she cannot solve the game on day 5 unless she knows the greedy box for day 5 (by seeing BBC or similar).

EDIT: This is solution is incorrect because (as discussed in the comments) I didn't account for the prisoners not knowing how the boxes are unique before beginning.

The following cannot lose and wins in 3-4 days. (assuming I understood everything).

We now know the correct Greedy box order and can win at any time.

This method is foolproof regardless of the hidden box order.
If the hidden order is B -> R -> G, you can win on the 3rd day instead of the 4th.

Sorry about the lack of spoilers. For the life of me, I couldn't get the >! tag to work with the list formatting.