Trip Routes that Visit 9 of 10 Cities

There are 10 cities on this island. For each pair of cities, they may have a bidirectional path.

What is the minimum number of the paths on this island; so that for each city, there exist a trip route that doesn't visit it?

This puzzle is taken from Indonesia National Science Olympiad in Mathematics 2011.

After playing around with it I realized that each city must have at least 3 paths so that if one city goes down there are still 2 paths to enter and leave the city.

Then I tried to construct the cities such that each city ONLY has 3 paths, the minimum required.

Although I am unable to provide a mathematical proof. 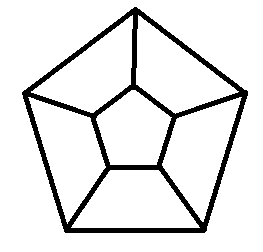 27
Is there a proof that a map of the United States requires 4 colors?
11
Can the idiot's route be less expensive than the genius' route?
5
Triangle of Safety
5
The grandest zoo in Appelhaken
5
Name that node #1 (Beginner's Level Puzzle)
3
Name that node #2
10
It comprises that which composes it