A puzzle with dominoes

I've got a puzzle using dominoes for all here at Puzzling. I came up with it while playing around a few days ago, and I know it can be solved. It may not be a new idea, but to the best of my knowledge, no one else has posed it.

Using the standard set of 28 double-six dominoes, form a square frame of 9 by 9 squares with a 5 by 5 square gap in the middle (one domino being one square wide and two squares long). The dominoes must fit together in a brickwork-style interlocking pattern, such that the frame consists of an inner square frame of 12 dominoes and an outer frame of 16 dominoes.

All of the 2 by 2 squares of four adjacent domino-halves must have a pip count equal to 12. 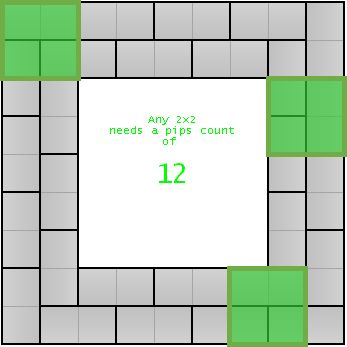 There was one idea I had that made constructing a solution a lot easier.

I decided to restrict myself to solutions where every pair of adjacent squares with one from the inner frame and one from the outer frame, adds up to 6. This automatically makes all 2x2 squares add up to 12.
The corner 2x2 squares are then forced to use two pairs of digits, arranged diagonally. Each corner must use a different pair of digits, otherwise you have a duplicate domino. All that is left is to fill in the edges of the frame. I hardly needed any backtracking to complete those sides.

Here is the solution I came up with. 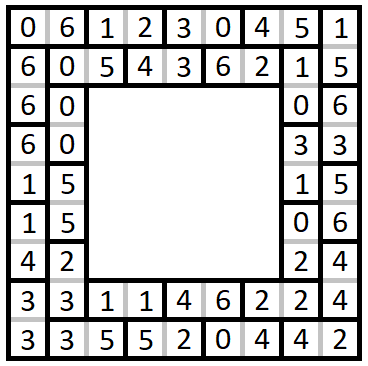 Here's another solution. I also used Jaap's clever restriction; it's much easier to verify the solution by hand after using that particular limitation.

This solution has twelves in the inside corners too. 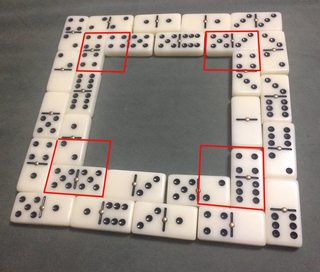 Not the answer you're looking for? Browse other questions tagged dominoes or ask your own question.

6
Is there another name or site for this “Dominotion” puzzle?
8
Dominoes on a chessboard
6
Dominoes With Letters
9
Cover the terrace with “slashed” tiles
4
Dominoes where NO two connected tiles have a number in common
13
How many tilings by dominoes of this region?
4
Place 28 dominoes in a loop
2
Place 28 dominoes into a 7x8 rectangle
3
A game of cross-dominos
15
Domino tiling on 8x8 checkerboard with four squares removed