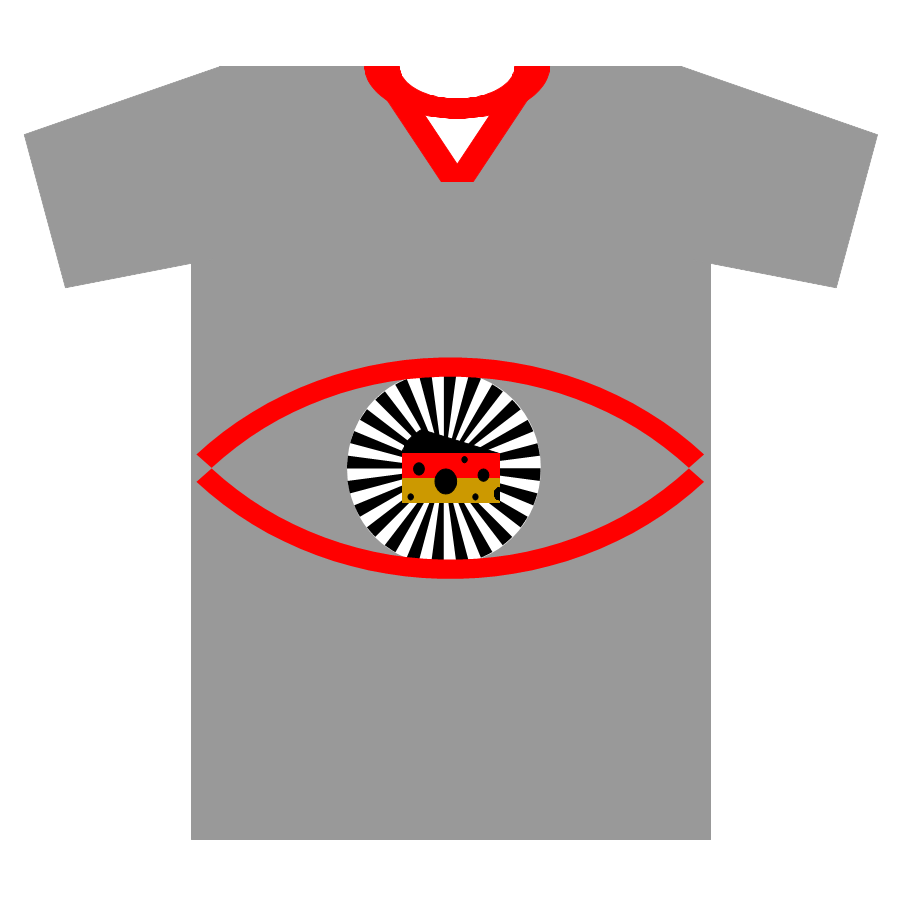 Reading direction is top-to-bottom and outside-to-inside!

It's a high-quality, all-organic t-shirt!

For the interpretation of the innermost parts, it may be beneficial to know a little about recent german tech-industry news.

If you left out any major visual element of the picture, you may have to re-think your answer. ;-)

Forget about the pattern-and-cheese part of the riddle for a moment - it only holds 20-25% of the solution and is independent from the rest. And it's admittedly the most difficult part.

We are not looking for the owner of this t-shirt - but if we were, it wouldn't be Igor Fyodorovich Stravinsky, Wolfgang Amadeus Mozart, or Edvard Hagerup Grieg.

What's the most used collar style of a simple t-shirt? And what's this?

The optical illusion is called Mire de Siemens in French, so Siemens. The clue about the retired techs is this image was also used to test optical resolutions.

The CEO announcing recent job losses of the firm (clue #3)

Rednex is a Swedish band. The Swedish flag is a yellow cross on a blue background.

cheese in german = käse, let's add the i (eye) we got kaise, close to "kaiser" = emperor, as Rupert said, yellow cross on blue = Sweden, H&M is quite the "emperor" of shirts from Sweden...a bit far-fetched, I know

Edit: some stuff I found after OP's comment, not sure if i'm going in the right direction

Ok so, th black and white logo is called a "sunburst" if I look for "käse sunburst" on google, I find a german guitar brand called "haar" (=hair). Sooo maybe the solution is more or less connected to hair

Eye, käse, sunburst. "I cause sunburst" . According to google, a small aperture causes sunburst on photos. APERTURE is a clothing brand, specialised in snowboarding, a well known sport in Sweden ;)

Their logo is the Swedish flag: a yellow cross on a blue background (Yellow-X-Blue) and the primary element of the rebus is an eye = I

why German cheese (the thing in the pupil of the eye looks like a wedge of cheese in the colours of the German flag) = KEA.