What is a Reversible Number™

This is in the spirit of the What is a Word/Phrase™ series started by JLee with a special brand of Phrase™ and Word™ puzzles, and the likewise inspired What is a Number™ series.

Use the following examples below to find the rule. 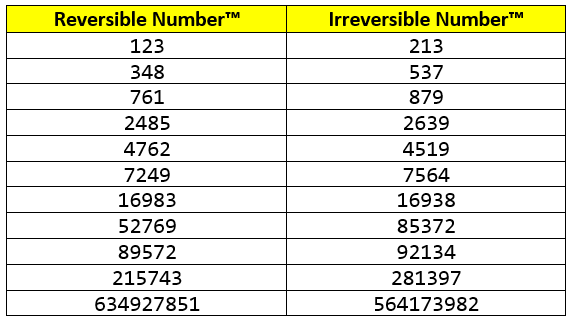 A Reversible Number is one where, when traced on a keypad, no line segment passes through an existing vertex on the path. If the number is flipped, that is still true.

Given the final tracing and the guarantee that it is reversible, you would be able to figure out the original number (or its reverse).

An Irreversible Number is one where a line segment passes through an existing vertex. This happens when 3 digits are in a line (horizontally, vertically, or diagonally) and it starts in the middle and then goes to each end. (In shorter numbers, this happens immediately; in longer numbers such as the bottom left, it visits another digit in between)

Given the final tracings, you would NOT be able to figure out the original number because there are many possibilities.

I imagine a "neither" would be one with the same number repeated, e.g. 5441. No line segment crosses through a vertex; however, you would not be able to figure out that there is more than one 4. Or perhaps another example would be 13, which passes through the 2, but the 2 is not an existing vertex. So it is neither reversible or irreversible