I recently found the game "98 Cards" by VdH and wondered if there is an optimal strategy to play it. 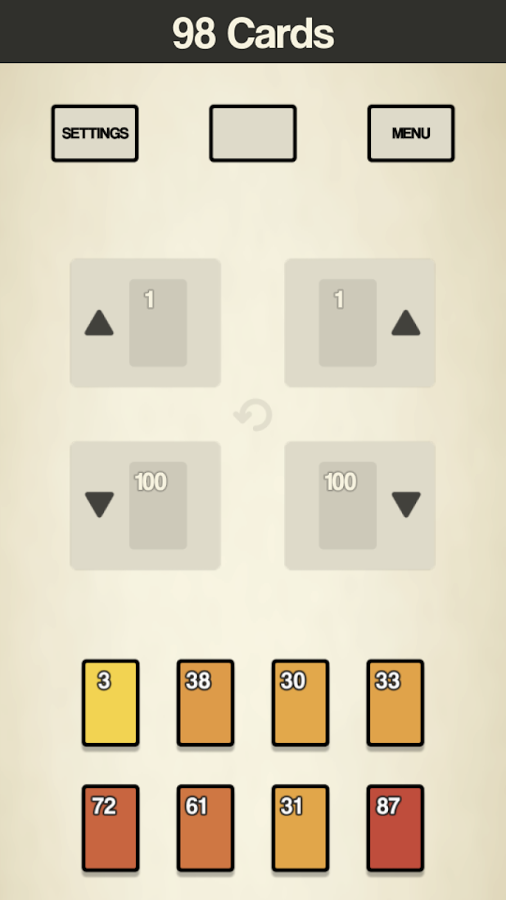 The goal is to sort all 98 cards from the main stack into the four stacks. The game ends prematurely when there are no cards in the palyer's hand that could be put onto the stacks, and there are still cards left to sort.

Is there an optimal strategy to play this game? The Rule of Ten's is giving me some headaches here.

Feel free to correct spelling or grammar mistakes. If this question would suit mathSE better, please migrate. I could not find any tags besides "cards" that would fit the question in my opinion. Feel free to add any suitable ones.

To solve this game optimally,

I would be putting my computer to play it with enough time to see its statistics and improve it.

I would put some algorithm firstly, such as;

Put the furthest number to the 50 to the proper pile first, then put another furthest accordingly. Such as if you have 97,7,20,25,57,54,89. I would put 97 and 7 first since there are the furthest. Because they will give you the most options for the next move.

If you have -10 or +10, options in your card, use Rule of Ten's rule immediately if have more options. Otherwise use 1.

Leave one descending and one ascending pile furthest to the 50 as long as possible.

If I have YX and ZX numbers, I would use them inversely whenever possible. Such as if I have 96 and 86. I would put 86 to descending pile and then 96 to have more options.

After getting out of options, play the nearest number to the pile's numbers.

I do not believe there is directly optimal methodology that you can put into words.

this might be a little late, but today, after playing this game on and off for about 2years, I finally won the game twice in a row.

My strategy is as follows: Always try to "lose" as few numbers as possible. I will try to give an example down here.

If you have on your TL a [51], in your TR a [65] and in your BR a [10]. Your BL is without any card number and in your hand you have [94, 53, 8] (I will not write all 8 numbers because it makes very difficult to try to explain my strategy). You'll maybe be tempted to put the [94] in your free card space (BL), because is the most high number you have until now and maybe you hope for getting to do a "10 combo" or something in the future, but it would be a mistake. The right decision would be to put the [8] in your BR spot and the 53 in your TL spot.

This is all about basic math and how many numbers you can stretch your limits.

I hope you understand my explanation. The idea is to try to skip the least amount of numbers as possible with the two moves combined.

Also, it's important to try to enforce the 10 rule whenever is possible.

Not the answer you're looking for? Browse other questions tagged cards or ask your own question.

11
Sorting cards using max 3 stacks
13
Cooperative guessing game
7
Cooperative guessing against an evil god
6
Solitaire Puzzle
4
Optimal game of Bluff (not the wikipedia one)
4
In a Guess The Color game, what's the optimal strategy?
4
Optimal solution to a modified poker game
5
Who's the winner of this card game?
5
Number of cards to be pulled
11
Card game with equal piles