(The first two chapters are just for flavour, you can safely skip to the TL;DR near the end.)

This puzzle in situated Helsinki for a reason: for the city's "200 years as capital" celebration, the massive granite church in Kallio was illuminated for several nights by shining a powerful blue laser from the Helsinki Observatory, located several kilometres away on the other side of the downtown Helsinki. The installation highlighted (quite literally) an interesting intentional design in the city's planning: Along Unioninkatu, there is an unobstructed line of sight between the two prominent hilltops that are home to those two buildings.

Now then, let's imagine that someone, a lucky drunken university student most likely, happened to gain access to the laser, and after shining it at various buildings, birds, and other targets of opportunity, left the laser so that it happened point exactly to east, and illuminated a ship somewhere near the horizon. (For the purposes of this puzzle, let's assume all these things are possible.) The question is: which end of the laser beam is the northernmost one?

TL;DR: If you point a perfectly straight beam of finite length from Helsinki towards the true east, which end of the beam is the northernmost one?

NB: This is supposed to be a 3D geometry and visualisation problem, or a maths problem without any calculations, if you like. So, although I'm a staunch advocate of loopholes and lateral thinking, please don't post such answers to this puzzle. Well, unless they are particularly excellent, of course.

EDIT: To avoid any confusion, there is absolutely no trickery involved here. Every term is used in its usual meaning, and there aren't any traps. Some examples:

I think one reasonable definition for a "correct answer" might be "the first factually correct answer that would convince even a somewhat sceptical person."

For the rest of this answer, I'm putting the observer to the east of the ship, so he's looking west, just so we have somewhere (geographically) to put the ship. It doesn't affect the answer.

We can infer the direction of the ship by checking what direction our instrument is reading when we point at something that is actually west of us. 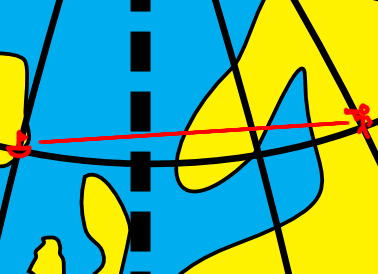 If the observer and the ship are due east/west of each other, then they're sitting on the same latitude, as shown above. But then the laser beam isn't tangential to the ring that represents our latitude; in other words, the instrument isn't reading the direction it would be reading if we he was traveling around the circle, facing forwards.

He'd have to turn to his left for that to happen: 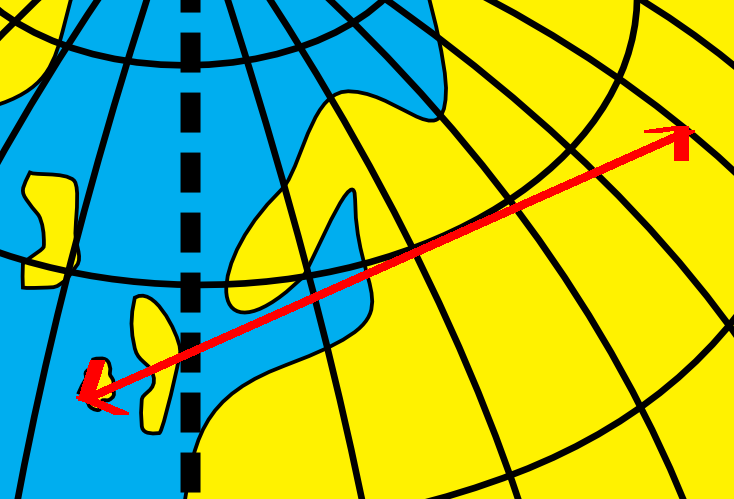 And then his instrument would be reading "west." So we can conclude that the ship is farther

If I understand this correctly...

The end in Helsinki will be more northernly, for both east and west facing lasers. This can be seen by imagining an infinitely long line, exactly tangential to the globe on Helsinki and going east-west. If you were to wrap that around the globe, you would get a full circle, with the part opposite to Helsinki being as far below the equator as Helsinki is above it. If this were done in Sydney, the result would be the exact opposite - The Sydney end would be the farthest south.

I'd add a picture, but currently don't have the methods/time to do so, will do when I get home.

I find that the easiest method in order to understand this problem is to:

very carefully draw the 4 cardinal directions at Helsinki on a globe with a pencil. You can then hold the globe, rotate it and tilt the axis so that Helsinki is on top of the world. All the great circles from this location are now vertical, and easy to visualize and to follow. If you pick the great circle going east-west from Helsinki, you'll come close to Venezuela and Easter Island.

Here's a visualization on a virtual globe: 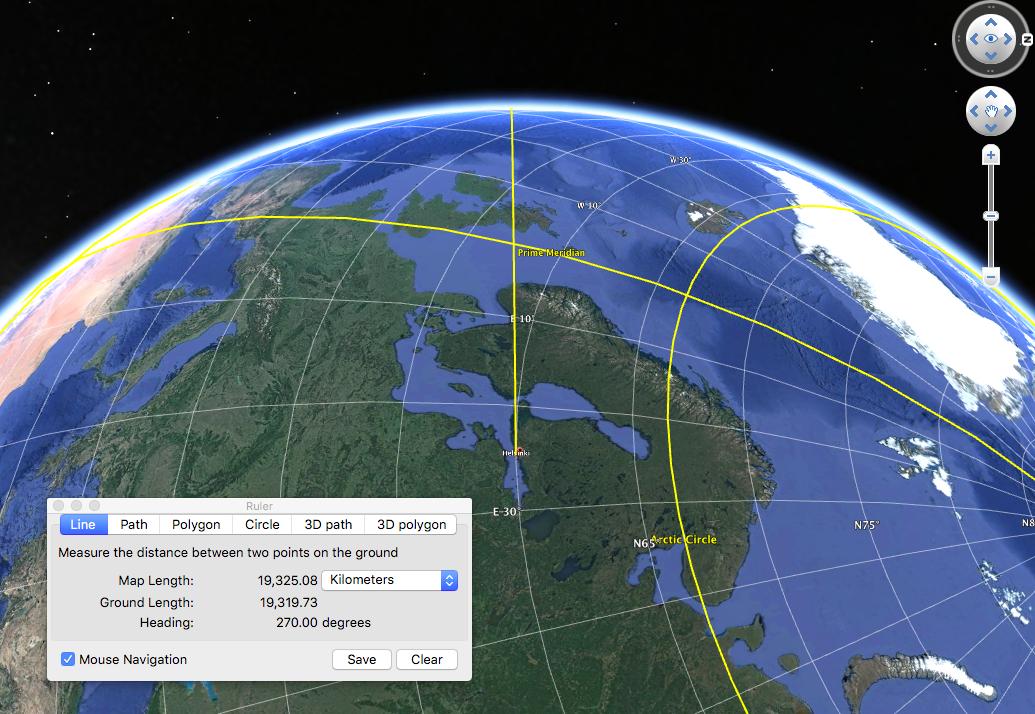 Note that the "laser beam" is already at the latitude of Spain before disappearing behind the globe.

Considering that in the TL;DR it is said:

I would say that:

In case the laser was in Sydney:

Since the declination is about 12° E the results are the same as in the Helsinki part.

20
Shooting a Laser Between two Mirrors
8
Ghost Ship Collisions
6
Bearing due, due and back
11
Ernie and the Disco Unicorn
4
The Mechanical Octopus
15
The Lazy Laser Physicist
11
Three-dimensional light bulbs
4
The revenge of 3D light bulbs
13
Puzzle about 6 infinite cylinders in space