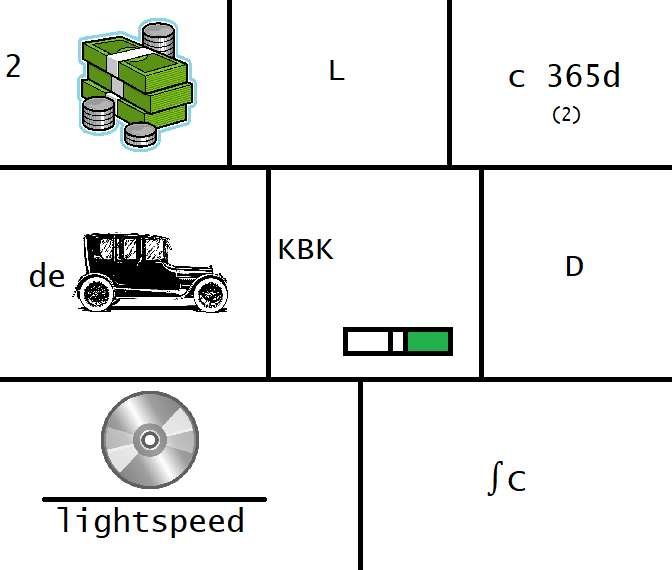 Find those three words which form a phrase.

Edit: I think there are many interpretations of the last square, so this is some more piece of information:

Open piece of information (so the puzzle wouldn't be too broad)

Indefinite integral is also called antiderivative. The opposite of derivative (here, read it as something derived from something else)

That the integral is indefinite is significant.

Third line based on OP's last hint for the last box:

My guess for the third line (before noticing OP's added hints, which seems to invalidate this answer):

Based on @Steve's answer for the first square, the first part is dis (disc / c).

Considering the C in the integral is a capital C (as per OP), it could be the number 100 in Roman numerals. (Feel free to correct my math here, I pieced it together with Google and Wolfram Alpha) The indefinite integral of a constant is the constant times X (+ another constant, which I'll blatantly ignore for the sake of this answer), giving "100x", which can also be interpreted as a count.

Based on @Matt's answer for the first two lines this would give the final answer:

fully automated discount
(Not sure if that's a thing, but hey, it's discount!)

My guess at a full answer is;

de is short for Deutchland. A quick search for car in German brings up Auto.

kbk, following the same German train of thought, may relate to a German company that creates couplings. The image might also relate to a coupling. Couplings mate together. This makes the middle word auto + mate + d.

Third line, in part because it just seems to fit...

the second box is a function, giving dis + function

The first word is

we take the first two letters from money, the given l and the two-letter abbreviation for lightyear. Lightyear, because lightspeed is usually denoted as $c$. And $c$ times $365$ days is the length that light travels in a year.

Ideas about the last line:
As already pointed out by others

the first three letters are dis.

Furthermore, we have the OP's third hint that

the word ends in y, but not in gry.

a search through the english dictionary for the RegExp ^dis\w*y$ and found 35 results. Unfortunately none of them rung a bell.

Not being a native speaker this is not surprising, but I'd like to share some ideas that weren't mentioned yet. The $\int C$ could be

and then associated with one of the words from the dictionary.

After reading the comments under @North answer (along with the answer of course), I think the first line is:

The money in the first square is a fund, and the rest is explained in the other answers.

The third word is "display": The indefinite integral is an antiderivative. Antiderivatives are known to have a constant of integration C that you can play with the numbers to change its value and get the antideriviative you want (the weakest explanation ever). Also a google search didn't yield much words that match "full automated dis*y". (credit goes to @Steve for "dis").

Partial answer of the third line:

$c$ is a the lightspeed, which is a velocity. Velocity is lenght or distance divided by time. Velocity is also the derivative of distance over time.
Since velocity is a derivative, by integrating it (assuming it should be "$\int{c\;dt}$"), we get a constant length or distance.

Depends on time. Getting a hint from the first line, which also references $c$ and references a year, so it could be a lightyear.

Is the final answer

first part DIS solved by Steve, second part SOLUTION because the indefinite integral of a constant $c$ is a linear function $cx+d$, where $x$ is the variable of integration.

Could be a stretch, but this seemed to be the best fit from among these possibilities:

A.P. is almost correct, but in fact it's

DOLLY: from the first two letters of DOLLAR, then an L, then the initials of Light Year ($c$ is light speed, then 365d is a year).

The first square could be something like DECAR? But I don't even know what the image in the second square is meant to be.

DISCO or DISCS? The first square gives DISC without $c$ (lightspeed), as Steve said, and the second square is $\int c$, which (if $c$ is a constant) will be $c$ times the variable of integration.

Most elements of this have been given by others already; think of this as summing up the current state of the art.

[something] + L + LY; we don't know whether the "2" means "first two letters" or "two different money-related words" or "word denoting two units of some kind of money" or what. We know (because OP has told us) that it isn't MOLLY or DOLLY.

I suspect the car in the first box is a Ford Model T, and this word begins DET. Or it could begin DECAR, but if I understand OP's comment on Rand's answer right then it doesn't. Presumably the D at the end is literal. The middle box is a big mystery.

First box is almost certainly DIS. (I think OP's comment on Steve's answer confirms this.) Second box is a mystery.

So we seem to have

Some comments on the start of the first line:

If -LLY is correct, then most likely the first box yields something ending in A. On the face of it, the most likely meaning of that "2" is that we are to take two things-indicating-money; but, while there are e.g. some currencies whose names end in A, none of them seems to give anything useful. (e.g., "...PESETALLY"? Nope.) CENTRALLY is tempting (beginning with CENT) but I don't see any way to justify the RA, nor have I thought of any plausible phrases beginning CENTRALLY DET... .

Some comments on the middle of the second line:

Perhaps the image means that KBK indicates (by being the initials? in some other way?) a name, long word, phrase, etc., that decomposes into a long bit + a short bit + a long bit, and we need the second long bit. [EDITED to add: OP has now posted a hint that confirms my interpretation of the image and indicates that it's a word rather than a phrase.] But so far I've failed to find anything plausible that KBK might mean. And it doesn't seem plausible that what this box yields begins with K ("DETK..."?!!), which you might expect if this is how it works. Most plausible words of the form DET~~~D: detoxed, detuned, detached, detailed, detained, detected, deterred, detested, detoured, dethroned, detonated, detracted, determined, detoxified, deteriorated. None of them very plausible, either in terms of fitting the rebus or in terms of making a familiar-sounding phrase.

Some comments on the end of the third line:

Someone suggested things like DISINTEGRATION for the line as a whole, but I think the "C" in this box has to be significant. If we take it to be a constant then we can get "CT" or "CX" or something, but I don't see that that works. What else is conventionally designated C? Capacitance. (Not a thing that often needs integrating.) Circumference, maybe. (Integral would be the area of some sort of surface made out of circles, like a disc or a sphere. DISA and DISAREA are not words.) All sorts of other even-less-integrable things. It's fairly common to denote the arbitrary constant you get from doing an integral by C, but why you'd be integrating that I'm not sure, and anyway DISCONSTANT is no good and making DISC by starting with DISC, deleting C, and then adding C seems rather unsatisfactory.

I think the first line is cally. Take the first two letters of cash, add it to lly, and you get cully. Btw, cally is a sland word for the police

For the second box on the last row, what if C is 100 (since In Roman numerals, C is 100) Or maybe its 300,000 since light speed travels approximately at that speed.

"Fully", "automated" and "dis" are already explained by the other contributors.
"Continuity": correct me if I'm wrong, but an indefinite integral is infinite, or continuous. Also, it starts with a "C", which is what perhaps that "C" in the integral thingy is.

The first two words have been discovered and confirmed already;

The final word, from @Steve's answer and OP's third hint, we know

starts with dis and ends with y.
The second box for this word is $\int{C}$.
Integrated with respect to $y$, this should be ${\rm C}y + \rm A$.
That doesn't really get us anywhere.

However, if instead we go through some admittedly tortured gyrations ...

If that's the solution to the second box, that gives us

dis + C over y $\implies$ discovery which, per the hint, ends in y.

Taking the first two letters of the word "CASH" gives CA, then adding the L from the second square and the C from the third square indicates that it probably should be a word beginning in 'Calc', like 'Calculate' or 'Calcium'. Not sure what to do with the 365d though (could be a year?)..

Maybe something like "Decarbonated", not sure about the second square though.

To explain the last bit

Plenary is synonymous with unlimited which is another way of describing an indefinite integral. So the last square could be interpreted as a "C-plenary" and thus
"dis" + "C-plenary" = Disciplinary.
It also gets some hits on google.

The rest of the puzzle has already been explained in other answers.

The first two words had already been answered.

For the 3rd word originally I had thought it to be

because the disc image could also mean cd, or candela. But with the latter image equating to function and using the hint that the the word ends in y. I have derived that the 3rd word of the phase is

Because it applies to a function. And because, A related quantity is integrated

which is the integral of the

with respect to time.