What phrase can you extract from this? 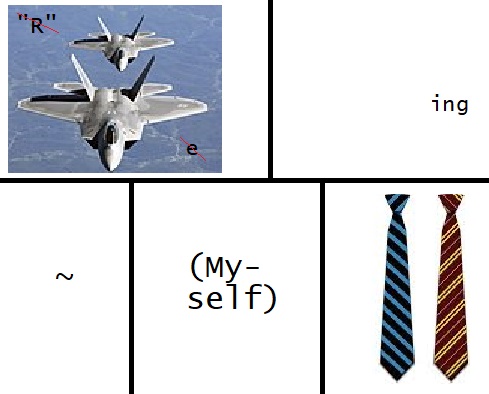 What phrase can you extract from these images?

The first image refers to "Air strike". We remove "air" (it sounds like "R") and then the "e" from the end to get "strik". The second box means we add "ing" to the end of "strik" to get "striking".

The ~ symbol usually means "approximately" or "about". I'm going to guess that here it means "similar" (but I'm not totally sure about this). Then we have "myself", which is "I", and an image of "ties". So we add "ities" to the end to get "similarities".

Well, at top left we have

two F-22 Raptor fighter planes. I can see how to remove an R from that, but not an e; perhaps there's some other term for them that I don't know about. I guess we could remove those letters from "fighter" to get "fight", though to me the image strongly suggests that the R is the first letter.

"fighting" (though the placement of that "ing" seems to suggest something more like "blanking", "whiting", "righting", ...).

Perhaps the bottom row is

un/i/ties (the tilde / swung dash is sometimes used to mean "not"; "myself" isn't too far from "I"; and the ties are obvious).

"fighting unities" isn't a phrase I can recall ever seeing. "Unities" in the plural almost always seems to refer to Aristotle's list of things that should remain consistent throughout a dramatic work; it's usually preceded by "dramatic" or "classical" or "Aristotelian", none of which seems promising here.

I think the first row is:

The two fighter planes represent "Air force". The "R" (quoted and capitalized) might be suggesting that we should strike out a word instead of just a letter, hence we strike out "Air" for sounding like the letter R. We then strike out "e" from "force" and get "forc", which we append to it "ing" and get "forcing".

As for the second row, I haven't the slightest idea.

fighter with no e or r is fight, one synonym is action | writing (over) "character or" | "personal I" | "Ties"

so putting those all together we get the slightly awkward sounding

Action writing, over character or personalities.