This is a puzzle of five men guessing how many stars will appear from tossing four coins. 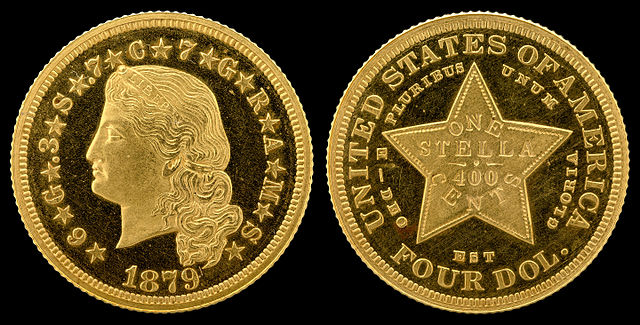 There are five men: Mr. Zero, Mr. One, Mr. Two, Mr. Three, and Mr. Four; playing with four coins. For each coin, one side is a star and the other side is blank (no star on this side).

The men guess how many stars will appear from tossing the coins one by one. There are no duplicate guesses (i.e. all men guess a different number from the others). Also, the number of men that pick their own name as a guessing number is not exactly 1 (may be 0, or more than 1).

Can you find out what are the men's guesses and which sides appear from all of the tosses?

For my answer I'm considering the sides of the coin to either have a star or be blank for ease of writing. I also will write out the number for peoples name, and use the character for guesses to try and keep things legible. (Ex. Mr Three guessed 4). Also when typing out sequences, + means star and - means blank. (Ex ---- means no stars / all blanks)

I agree with Kate Gregory's Answer but there is a flaw in the logic.

in the second flip she said:

however that's not true. because its also possible that...

Guessed 3 and the result was -- . It was noted that Mr Zero could have guessed 4 and conceded when +- happened. However this is ignored at the end and it's assumed that they only could have guessed 0 or 1. The assumption of the results being -- is correct but couldn't have been determined by the logic given.

How I got to my answer:

I listed all of the possible flip orders. I've lettered them for ease of reference. There are only 8 because we are told the result of the last flip.

After that I assigned guessed to people based on the clues.

In A through D, Mr Two would had to have guessed 4, and in E through H they would have had to guess 0.

At this point we are told Mr One is still in it to win it. but with a single flip left, there would only be 2 possible outcomes left. so if Mr Four wins and Mr One is still in, Mr Three must be out. Which means in Alphabetical order Mr Three would have guessed: 2, 0, 3, 1, 3, 1, 4, 2

Now we set Mr Fours guess to whatever the right answer is and Mr One to one above that.

So the guesses would have to be (in name order)

however there are still 2 clues I've ignored up until this point.

We cannot have a set of guesses where only a single person guessed their name/number which means that A, D, and E are all out. leaving B, C, F, G, and H.

Then there is the last clue I've ignored.

Mr Three panicked when the second coin was flipped.

so lets look at our remaining options:

In B Three guessed 0 and I think it would have been weird for them to panic when 2 blanks come up in a row as that's exactly what needed to happen for them to even have a chance. In C Three guessed 3 and the result was a second star. Which while it's not required that they get a star, it's still better than a blank. So I would find it weird for them to freak out. In F they guessed 1 and the second flip had come up blank after a star which again they needed to happen for them to win. I know people who would still do this, which is why I didn't rule this out when first discussing flip 2. In G we see the exact opposite of B, two stars in a row when they guessed 4, which is exactly what needs to happed.
Lastly there is H which had 2 Stars come up in a row. In this case Three guessed 2 and they actually had some leeway in this one. either result could eventually have won for them, but it's less likely if the result was a star. So for me this is the only one that makes sense for them to panic for.

so with that my guess is:

EDIT: Adjusted some formatted that I realized was off and fixed a spot where i excluded C for the wrong reason as was pointed out in the comments

Also on that flip,

Since Mr Three has said Oh no, he is probably a 2 and is hoping for no more stars. He can't be a 3.

The third and fourth flip

Mr Four actually won, and can't be a 4 because of his name, so by the same logic as Mr One, he must be a 3. That makes Mr One a 4 and means the third flip was *.

First coin is tossed, and Mr. Two announces that he lose.

First toss was a star, Mr. Two announced 0 stars so it's over for him.

After the second coin toss, Mr. Three says "Oh no!" in panic and Mr. Zero surrenders.

This toss was a star again, Mr. Three announced 2 and it's over for Mr. Zero who announced 1.

Third coin is tossed, and Mr. One is still hoping for a winning.

This toss was a star too, Mr. One announced 4 stars, Mr. Three is out.

The last coin is tossed and it shows a side without a star, and now Mr. Four is clearly a winner!

Mr. Four announced 3 stars, this toss wasn't one so Mr. One is out.

Going through the flips

Mr. Three panics. This means he couldn't have lost on this flip, but could lose on the next one. This is only possible if he guessed 2 and the second flip was the same as the first.
Mr. Zero is out. Since the two flips had the same outcome, he guessed 1 if Mr. Two guessed 0 and guessed 3 if Mr. Two guessed 4.

This isn't useful yet, so we move on.

The last flip is _ and Mr. Four wins. This means he didn't guess 4. Further, Since Mr. Three lost, the number of stars flipped wasn't 2.

From this information, we know that the only possible solution sets are

Going back to the third flip eliminates B, as Mr. One would know he can't win, while C is eliminated by the knowledge that exactly one name can't match. Thus, the solution is

I wrote out the outcomes in a tree in notepad: 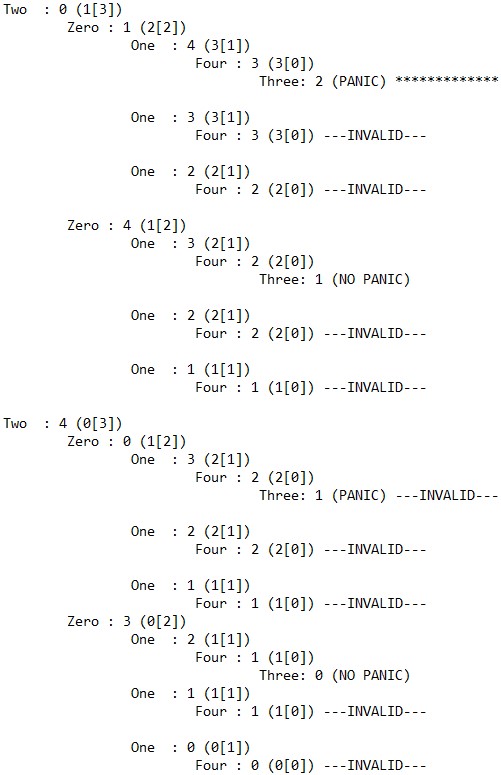 My explanation of Mr. Three's choice is long winded enough that it has been shifted to the bottom of my answer.

Interestingly, the tree shows us that the result of the third flip must be a star, because otherwise Mr. One and Mr. Four will share the same guess (At this point I will stop listing all the possible values in this text box), and the guess of Mr. One must be larger than the guess of Mr. Four by 1 star.

By examining the results of the previous 4 coin flips we can choose the value of Mr. Three's guess by simply choosing the guess which hasn't yet been taken by another man.

On the panic of Mr. Three (thanks to eyeballfrog):

The range of possible stars from the remaining coin flips is can be represented as [Current number of stars, (Current number of stars + Remaining coins)]. One would expect that the only cause Mr. Three would have for panic would be if his guessed approached one of the bounds of this range. The two possible ranges (in order of the tree) before the second coin flip are: [1, 4], and [0, 3], while the four possible ranges after the second coin flip are: [2, 4], [1, 3], [1, 3], and [0, 2]. Given the four possible values of Mr. Three's guess, and comparing them to the change in ranges caused by the second coin flip, the only valid guess which would cause Mr. Three to become panicked is a guess of 2 where the range changed from [1, 4] to [2, 4]. All of the other valid paths would have given Mr. Three no cause for panic.

In my solution let 1 represent stars and 0 represent blanks. 1100 being the final result satisfies all the requirements.

Guessed 1111 and says "Oh no!" as a distraction in this order of coin toss results.

It looks like there are multiple solutions. For instance,

Not the answer you're looking for? Browse other questions tagged logical-deduction coins or ask your own question.

58
Left coin, right coin, last coin?
12
Two men for one gold coin
7
Four coins (plus one) and a balance
8
Forty-six genuine and two fake coins
0
Five coins on a 15x15 board
1
My Friend, 4 kids and gold and silver coins
11
2 fake coins from a pile of 30 coins
5
Find the most unfortunate compact combination of coins to have in LOLandia