What is the word? 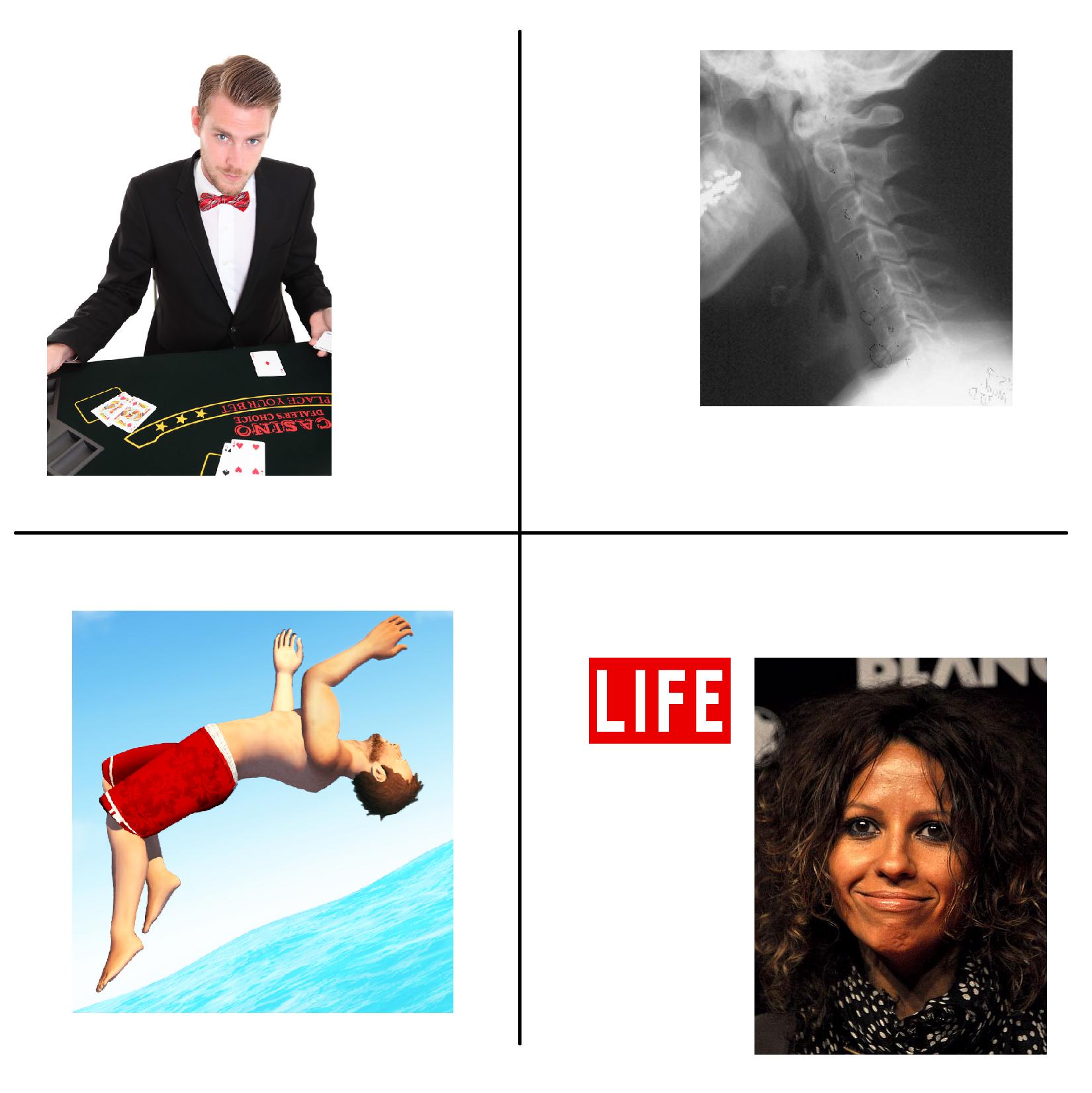 Edit: I realized that people are somewhat distracted from the actual word. Most of the images are just supposed to represent a simple word. People search for what the picture means (For example: People guess "Blackjack" instead of "Dealer" for the first image) instead of what the picture shows. The next time I create a puzzle I will make sure people get on the right track (or I will make a puzzle that is as complicated as people expect this one to be)

Edit 2: How long should I wait until I post the correct answer?

I believe it is

The four pictures are:

Bottle flip (that silly youtube trick that I used to think was stupid until people started eating tide pods).

Life in a bottle (A song by Linda Perry).

Could the word be...

double, as in "double dealer", "double image", "double flip", and "double life"? Not sure how Linda Perry fits into it, though.

Black Jack, a Black Back, and a guy doing the Back Jack

She wants Jack Back.

To be more precise, upper right is a

Well, looking at her career, she maybe just wants

Given that she probably wouldn't want any Jack, rather a Jill, and that she has a Jill but needs a life, I guess she wants her life back. So In any case, the suggested answer here is "back".

OK, if nobody comes up with stuff, I'll throw out a few more wild guesses, just what came in mind, suggested solution in italics.

I'll start with some stuff that didn't work for me, maybe someone can get another idea off it:

Since that flipping sucker looks like second life to me, I got the idea to look for her second live disc (maybe the casino guy would fit the title), turns out, there is no such thing.

I tried to find the article about her in Life magazine. Couldn't find any, nor anything around that fact.

There is a Linda magazine, but it's from the Netherlands and doesn't seem related to this riddle.

There is a Perry magazine, but it's about real estate deals on Malta, seems even less related, although they have a display of vertebrae at the prehistoric site and cave museum.

guy is a dealer, neck needs a healer, jerk's no appealer, she writes for a squealer

this guy looks gay, that photo is an x-ray, flipper causes dismay, a life in disarray

then the solution could be

in flight, (although those are two words) since that's her only album on vinyl as far as I could find (a vinyl is the only kind of disc type for commercial releases you need to flip in the player)

not really happy with any of these, though, but that's what I got so far.

And a final third attempt guess:

This may help someone find the word. The images are:

11
Find the secret phrase in this encrypted image (part 3)
8
Some four word puzzles (and possible bounty)
7
Guess the word - It can be found in a map
11
The Word Web of horror - Clue Twenty Two
1
Suits of tiers - A GW2 themed enigmatic puzzle
8
Piece de Resistance - Queen Machina, my Majesty, Time for a Hearty Supper!
25
12 hidden clues in just one paragraph!
7
An extra one? Who knows
31
IATA Airport Abbreviations