Can you find the killer [closed] 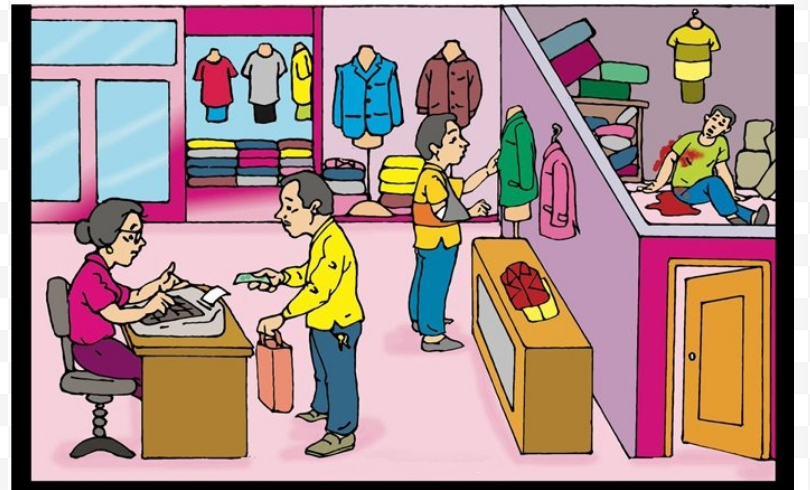 The killer is someone inside the store. I have no idea of the answer though.

The killer is the man with the cast

The blood stain is on the left side. Both the man who is buying and the cashier are using their right hands. The man with the cast can't use his right hand (assuming his hand is genuinely broken).

In my opinion, the answer is:

The woman at the cash register

The chamber is rather big to just be a fitting room, and the only people who have access to storage chambers are employees.

A perfectly reasonable guess would be that

The guy offering the cash did it, and the lady is in on it with him. The guy with the cast is an undercover cop, the dead guy was his informant.

Starting the reasoning from the beginning:

The guy in the back room didn't die quietly. The stuff on the shelves is in disarray, and after a stab wound like that, there's bound to be a lot of noise. The door to the back room is open, and even if it weren't, the noise must have been audible to the whole store. The lady works in the store, so she must certainly have heard it. This definitely rules out any "freak accident" theories.

Therefore, we definitely have a murder going on here.

However, the lady doesn't look like she is going to be reacting to the noise.

That seems pretty incriminating. However,

the guy with the money is also behaving suspiciously: when you buy something in a store, you pay first, while the stuff you are buying is on the counter. The cash guy, however, has the bag already in hand. It stands to reason that there aren't clothes the guy is buying in that bag. Instead, we would likely find the murder weapon and some bloodstained clothes the cash guy has just changed out of. The cash guy needs a motive. One that would fit everything is that he is running a protection racket, the store is either a front, or "under protection" of the organisation, and the dead guy is a snitch. Since he is obviously a professional, he can use a knife with either hand, so the stab wound's location doesn't contradict his apparent right-handedness.

Now that raises the question, why bother with presenting the money, if all this is true? Well,

the guy with the cast may very well have entered the store as the murderous couple were in the process of cleaning up. He is probably an undercover cop, since it makes very little sense to browse for jackets when your hand is in a cast and you cannot try the jacket on.

This explains all the bizarre behaviour going on:

The murderous couple recognised the cop, are pretending that there is nothing special going on, hurriedly trying to act out a regular clothes sale scene. All the while the cop is trying to pretend that he's not there to check out why his informant didn't come out of the store a lot earlier.

I think this reasoning is so foolproof that we could probably just skip the court room altogether.

Doesn't explain where the missing half of the cash guy's right foot went, though. Maybe into the other, slightly Escherisque dimension into which the door seems to open?

I believe the killer is

The man with the sling.

In the change room

The shirt that is hanging on the wall has a horizontal stripe similar to the man with the sling. To add to the theory, wearing a sling could be a good way to hide a knife (or similar object) and also deter others from suspecting him.

No hard evidence on this, purely speculation

He has already been accused, but:

the man with the cast

For a reason that, imho, is pretty strong:

Why would you ever go trying on shirts/coats, while wearing a cast? There's no way you're gonna get that up your sleeve.

The guy on the counter

He is the only one who could have entered the try room. The other man is still looking for something to try on.

This was the best I could do with such limited information.

In my opinion, I think the killer is

The man with the sling

To add on to what AstroMax said, I think that he might be concealing the item he used to kill the man in the coat he is currently looking at.

The man at the cash register

He seems to have a gun in his pants pocket, and his shirt shows signs of a struggle. The dead boy might have attacked him with his hands before he pulled out the gun and shot him. 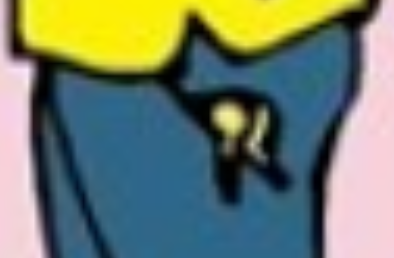 The cashier, because:
She's the only one who could have changed out of blood-stained clothing without making a purchase.

Not the answer you're looking for? Browse other questions tagged logical-deduction enigmatic-puzzle mystery or ask your own question.