How do I rotate edges on the Geared Mixup puzzle?

I've pretty much solved the puzzle. All centers, edges, and corners are in the right positions. I just have one small problem: I have three individual edges rotated on the Geared Mixup puzzle. Two are shown in the picture below, and a (hidden) one is opposite the green-white edge. 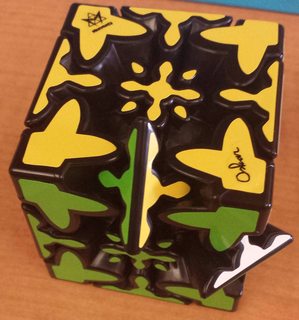 I'd like to find a move-efficient way to rotate the edges back on this puzzle, but I'm struggling. I have two major thoughts:

I'm looking to construct something move-efficient, too.

If we construct a reversible sequence [B] that sets up the puzzle such that a center is opposite the edge that needs to be rotated, both are in center-slot positions, and we can easily reverse the edge swap and center swap, then this problem is solved.

The problem is that last bit: I can construct a sequence that does this, but I can't easily reverse the side-effect center and edge swap. If the edges are opposing edge pairs, they can be easily reversed by [A]. (I'm not worried about centers, because pairs of centers can be swapped easily.) For the life of me, I can't get it that way.

Here's an example. Let's say that we construct a [B] = B' D R (s.t. [B'] = R' D' B). We've moved the green-yellow edge to the opposite of the white center in positions where they'll both be rotated. However, as a side effect of the way this was constructed, executing [B A B'] will result in a swap of the orange enter and blue-red edge, and the yellow center and an orange-red edge. This is a swap that's not easily reversible.

I'm looking for a sequence [C] that will put reversible swaps in those positions, such that I can execute [B C A C' B'] (or, in other words, use [B C] as a setup sequence) without having to worry later about struggling to swap those pieces back. (To swap them back is pretty simple: just execute [A] on the right edge pair - but they need to be effecacious for this change.)

My two questions are:

That's funny, I just finished finding my own set of algorithms.

My base algorithm is effective in select situations.

I found a 2-2 swap from [A]=RU'RURURU'R'U'R2' swapping right-up edge and back center in additon to the left center and left-front edge. The key comes in the setup move [B]=R2F2x. (reminder: x is rotating the entire cube as if you were doing an R turn). This setup puts the originally swapped pairs into a new configuration to be swapped back. However, in swapping back, the original left-front edge will be rotated 90 degrees counter-clockwise. Thus the full algorithm I use is [A][B][A][B]'.

This is efficient if I just have one gear that needs to go in the right direction, but I found some others for other cases.

The main advantage that I see with my approach over yours is that your base sequence manipulates pieces that are opposite each other. This adds a lot of symmetry, which when attempting to isolate a single edge to rotate, isn't exactly what helps. My initial technique was an accident I stumbled upon, [1] was going to be my intended solution as it is flexible and the [D] setup isolates the gear to be rotated on the Back face and then proceeds to rotate it (but it had a side effect), and [3] was finally settled upon as my preferred rotator as it exchanged one of the rotated gears of [1] for a center, so it goes on unnoticed.

4
Can two corners be swapped using commutators?
5
How to discover twisty puzzle algorithms that are not commutators?
5
Axis mirror cube has one centre piece rotated by 90 degrees
1
Is there a standard name for this 2 look PLL algorithm?
4
Oriented Rubiks Cube 4x4 re-arrange center pieces
2
Last layer, rotate 3 edges
3
How to fix swapped edges in a 5x5 rubik's cube
2
How to achieve a yellow cross on Rubik's cube from three yellow edges on the top layer?
1
Why do centers seem flipped from guide despite centers not moving in relation to each other?