What characteristics of a ciphertext can be indicators of a particular cipher?

If I have a ciphertext, what information about the probable ciphers used can I infer from the ciphertext itself? For example, information from:

and any other information that is intrinsic to the ciphertext itself.

I'm talking about pencil-and-paper ciphers of the kind often used in cryptogram puzzles, rather than real, 'strong', modern forms of crypto.

I'll start with a few simple ones to get us rolling.

Base64 has a 2/3 chance of requiring one or two trailing = signs - if you spot any of these, there's a very good chance you're dealing with Base64 encoded text.

A Bacon cipher is composed of 2 binary bits, which can be represented by anything (eg. could be upper/lowercase as in one recent question, or could be based on whether a cat is white/black, as seen in another). The tell-tale sign is if the ciphertext length is divisible by 5, as each letter requires 5 binary bits of Bacon. Yum.

Frequency analysis is most useful for Caesar ciphers (also known as Caesarian shifts) or similar ciphers where a letter is always encoded as itself (ie. if an E encodes to a K anywhere in the text, it will encode to a K everywhere in the text). Many websites have frequency tables for how often you should expect a letter to appear, and if you have a reasonably large block of ciphertext, this may be a good way to get some initial letters.

A substitution cipher is a very simple numerical cipher where letters are replaced with their numeric position in the alphabet (eg. A is 1, B is 2, etc) - this may also be combined with a Caesarian shift. If you have a sequence of numbers where none are over 26, try a quick substitution and see if you get anywhere. Numbers above 26 may still be substitutable using modulo, but it's less common.

Playfair ciphers are composed of digrams (pairs of letters) so the pair of letters HI may encode to something like PK. If you have an even-length ciphertext, split it into digrams and look for duplicates. If you spot the same digram appearing multiple times, you should begin to suspect a Playfair cipher (or other digram-based cipher).

Polybius ciphers (or Polybius squares) are composed of the same 5 characters over and over again (for example, A, B, C, D, E) and also happen to be digram-based so it must be an even-length ciphertext. If you have only 5 repeated characters and can split them into digrams, it's highly likely you're dealing with Polybius.

One more common-sense point - if you have a keyword then you can usually safely rule out any cipher which doesn't require a keyword. For example, Base64 is just an algorithm which you put text in and it gets spat out the other end, while a Playfair cipher uses a keyword to make the cipher stronger.

Groups of 5 or total length divisible by 5

Might be the Baconian Cipher, which uses a set of 5 binary-coded ('A' or 'B') items to represent each letter in the plaintext.

Example: Lolcat Steganography: Find the message hidden within the transport medium of humorous feline photography has 20 cats, and some of the possible plaintext answers are 4 characters in length. So each plaintext character could be represented by 5 cats, which makes it worth checking for Bacon.

Max group length is 5 characters if digits are used, 6 if punctuation is used, and prosigns can be even longer. So if the ciphertext is almost all groups of up to 4 characters then it still might be worth checking for Morse.

Perhaps the spaces between the groups correspond directly to spaces between the words in the plaintext. If so then this could be a simple substitution cipher such as Caesar or even good old ROT-13! Frequency analysis might yield interesting results.

Ciphertext consists of arbitrary objects rather than textual characters

Can a binary distinction be made which divides the objects into 2 types? If so then if the total number of objects is divisible by 5 then this could well be a Baconian Cipher. 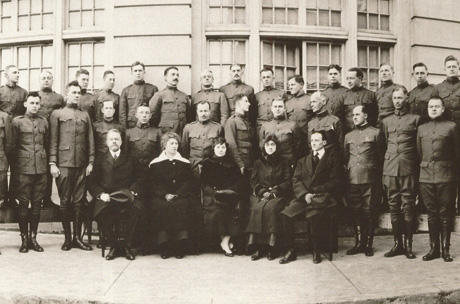 Detail from a photograph of World War I cryptographers trained by William and Elizebeth Friedman, Aurora, Illinois, early 1918. By facing either forward or sideways, the soldiers formed a coded phrase utilizing Francis Bacon’s biliteral cipher. The intended message was the Baconian motto “Knowledge is power,” but there were insufficient people to complete the r (and the w was compromised by one soldier looking the wrong way).

How to Make Anything Signify Anything, Cabinet issue 40 winter 2010/2011, William H. Sherman

Ends in an equals symbol

Try Base64 - the '=' symbol is sometimes (but not always) needed for padding, to make the ciphertext the right length.

One class of ciphers that can be identified in an interesting way is the polyalphabetic ciphers. Of these the Vigenère cipher is the best known. They cycle through different alphabets periodically. This period can be identified, which will both identify the cipher as polyalphabetic, and also provide a starting point for decrypting it.

An effective way to break a polyalphabetic cipher is by using a technique known as index of coincidence. This is a measure of how frequently a pair of independent characters happen to be identical.

If one makes a guess at the period being 10, one can compute percentage of identical characters for only those pairs using the same alphabet. There are 10 alphabets and for each alphabet there are 10*9/2 possible pairs of characters, that's a total of 450 pairs, which is enough for the percentage to still be statistically significant.

If you have already the information, that a cipher maps something onto letters, then counting the number of different types of something can give you a clue if there is a unique or a multiple mapping of something onto a single character.

An example for this can be found in the My new cipher with numbers puzzle:

In this puzzle, all number-pairs are different, despite the additional information given that each pair stands for 1 letter, and that the given ciphertext is a full sentence.

Clearly a specific letter can be expressed in different ways which already rules out many of the known ciphers.

Adding to the previous excellent answers:

If the letter frequency distribution looks like regular English (lots of ETAOIN, a bit of SHRDLU), and there are maybe (but not necessarily) some short recognisable word fragments in the mix, you are probably dealing with a transposition cipher of one kind or another. If the word lengths look reasonable, it may be just anagrams.

If you have a lot of numbers, mostly between 65 and 122, what you have is ASCII encoded text. This is often used as an additional layer, if the cipher puzzle is based on mathematics.

If the ciphertext only has numbers 0-9 and the letters A to F, then it is hex encoded. If the ciphertext is mostly made of pairs that are in the range from 41 to 7A, you have hex-encoded ASCII text.

If the ciphertext has irregular spaces at the beginning of lines, but otherwise looks like regular text, it's probable that the creator is trying to hide (or create) a simple acrostic.

If you have only capital letters in groups of five, you are probably dealing with a strong cipher, like Enigma, or another military cipher. Since these are too hard to crack for puzzling purposes, they will usually come with hints and/or encryption keys given.

And of course, if the ciphertext consists only of the words a'la'ih and do'neh'lini, you are up against Navajo code talkers.

41
Guide to Codes and Ciphers
24
The Curse of the Ancients
44
What is encrypted in this image?
32
A Letter from the Past
32
The Baconian Tower
27
Decode the message enciphered in these symbols: ◳◰ ◓◨ ◨◧◕ ◎◌ ◱◯◱◯ ◍◌○ ◉◉ ◇◔◓◕ ◐►◓◒ ◒◑ ◈◑ ◆◆◓ ◉◉◉
23
The Hunting of the Snark: Given ciphertext and plaintext, what cipher is used?
35
Lolcat Steganography: Find the message hidden within the transport medium of humorous feline photography
11
Christmas Day Cryptogram / Riddle
8
A Favorite Film Cryptogram
See more linked questions

17
Crypto-wordsearch-gram: "You Are a Member of the Rebel Alliance, and a Traitor!". A cryptogram hidden within a wordsearch
23
The Hunting of the Snark: Given ciphertext and plaintext, what cipher is used?
11
Christmas Day Cryptogram / Riddle
17
My friend is lost in time!
6
Room 5 of the Maze
7
The Cursed Breakfast
71
Unsolved Mysteries: Kryptos
0
What is this cipher?