There is a very difficult rebus. Try to solve this. The rebus is as follows: 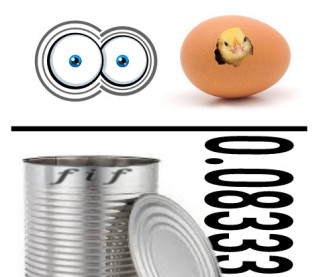 The answer isn't a number.

I'm not sure this is correct, but hopefully parts of it are.

I am pretty sure that it is Isaac (eyes + egg), but the other part eludes me. Maybe that will help (or hinder) someone.

The relevant passages taken from here are reproduced below.

Genesis 26:12-15
12 Then Isaac sowed in that land, and received in the same year an hundredfold: and the Lord blessed him.
13 And the man waxed great, and went forward, and grew until he became very great:
14 For he had possession of flocks, and possession of herds, and great store of servants: and the Philistines envied him.
15 For all the wells which his father's servants had digged in the days of Abraham his father, the Philistines had stopped them, and filled them with earth.

Just some jottings of a (partial) answer to each part separately.

Reasoning for the bottom part:

I can barely take credit for this as I thought about this by all the other answers.

While I first also thought of

the answer by @Lawrence made me think about reading it even faster.

I think the Answer is

Isaac(Eyes + Egg) Isaac appears in the book of Genesis.

The second part is about

So I came to the solution:

4
What another rebus?
29
A calculation error made a rebus
9
Finding out a rebus
4
Rebus: "intoxicated"
14
What is this rebus?
5
HAPPY NEW YEAR rebus!
4
Find a short rebus
3
Are You Smart Enough to Solve This Rebus? Beat the Creator Challenge
7
Can you tell me what this drawing is? (Rebus)