Does this grid puzzle with a symmetry-breaking condition have a solution?

Since challenge questions are up in the air, what better time to pose a puzzle-building question that's intrigued me for some time.

Consider an infinite square grid made up of nodes and edges as shown in the following figure: 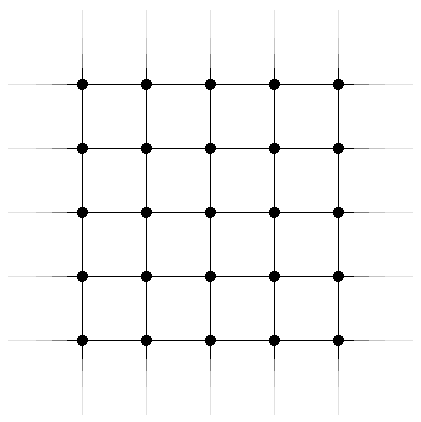 Each node connects to four edges, which are labeled top, left, right, and bottom as one would intuitively expect. Likewise, every square in the grid has four labeled edges. These labels are depicted in the two figures below.

Every edge in the grid has a parity label, which is either $A$ or $B$. Parity labels obey the following two symmetry rules:

The idea of the puzzle is to find a rule (or rules) for assigning a parity label to each edge in the grid that satisfies rule 1 at every node and rule 2 for every grid square. 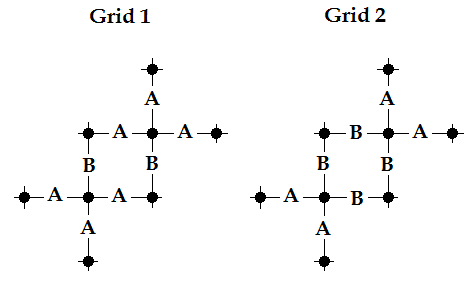 None of the existing parity labels may be changed, and rule 1 applies everywhere except at the two symmetry-breaking nodes.

The amended goal of the puzzle is therefore to find a rule (or rules) for assigning a parity label to each edge in the grid that satisfies rule 1 at every node except at the two symmetry-breaking nodes, and satisfies rule 2 for every grid square.

It's not intuitively obvious that the puzzle as stated above even has a solution. And indeed, all of my attempts to find a rule to populate the grid have lead to what I'll call "gridlock"—the inability to extend labels further in any direction without violating at least one of the two symmetry rules.

Unfortunately, "COTO gets consistently stuck" is far from a rigorous proof of non-existence of a solution, hence I shall commit the puzzle to the enterprising minds of puzzling.SE.

Does this puzzle have a solution? If so, what is it? If not, is there an elegant proof of this fact?

Answers and intuitions are welcome.

I wouldn't call this 'elegant', but here's an argument that there can be no solution starting with Grid 1. 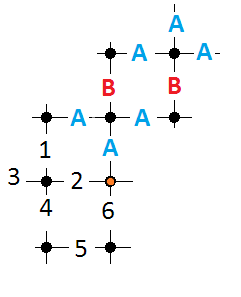 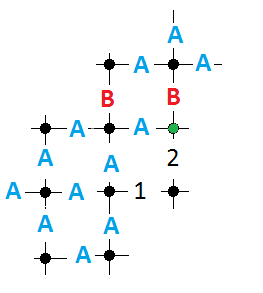 I drew something similar for Grid 2. It was a slightly more complicated, but I again found that there could be no solution.

This is an extremely late bump so feel free to ignore me, but I found this mathematically interesting, and if it has theoretical implications then what the heck. Also, I take it you mean with rule 1 and 2 that it actually goes both ways, and not merely one way. I'll do a general case first, and then explain how it solves your case.

I claim the following:

Suppose every node and box in the grid follows rules 1 and 2 of symmetry, and two edges connecting to the same node at right angles have the same letter. Then the entire grid is that letter.

This requires two important observations. The first is that any two edges with the same letter like this will either be copied by a single box or a single node. Therefore, they are actually going to make two other right angled edges the same, their partner multi-set (I guess). From there, you can take the other two adjacent right-angled pairs, whether across a box or a node, and extend them using the other rule. Keep alternating rules and extending your rectangle, and you have the whole grid.

From this infinite grid result, we derive the only four solutions for the transformed infinite grid with symmetry at all nodes: all A, alternating A and B, or flip the letters on the previous two to get two more. To see why the alternating grids are the only other solutions, consider what would happen if two adjacent boxes (right-angled edges in the normal grid) were the same letter. If no adjacent boxes are the same letter on a square grid, you have a checkerboard pattern, and a specific, "fixed" box should be either white or black, giving the two solutions for a fixed position.

But your problem doesn't have all nodes following the same rules, and the way I stated the "theorem," it wouldn't apply here. However, you can build out an infinite solution in the same way in your examples, since the example is constructive.

Returning to the grid as you put it forward, every pair should have exactly one node or box that it duplicates to or from. So the outer double A pairs won't work to make an infinite grid in either example, since they duplicate to the broken edges on the inner box; there is a similar problem with taking pairs in any parallel diagonal in your examples.

If we try to build infinite grids out of the pairs in the other diagonal direction, however, we see the problems. These are the squares adjacent to the bad nodes that have two edges unlabelled. In your grid 1, they conflict between making one of the checkerboard patterns on the infinite grid, or making a grid of all A's. In grid 2, they make two conflicting checkerboard grids. Neither of these can be the static grid at the same time: so the pattern is impossible.

Checking these cases is very finite and fast, if you are looking at your static grids, or a transformed version of them. There's no problem going back and forth, as long as you keep your lefts and ups, etcetera correct.

Not the answer you're looking for? Browse other questions tagged combinatorics pencil-and-paper-games solvability or ask your own question.