Draw ten dots that are all the same distance apart

I am wondering, is it possible to draw ten dots so that every dot has the same distance to every other one?

And how many possibilities are there? 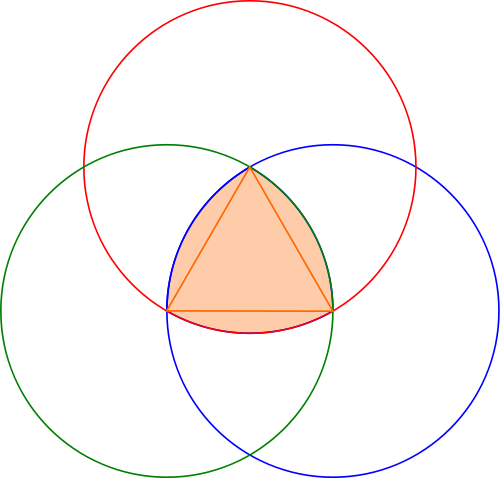 (So it certainly isn't possible to do 10 dots!)

In general, you need $n-1$ dimensions for $n$ dots with this property: these dots will form the vertices of a regular $k$-simplex.

Sure, there's one possibility:

Each dot has a distance of 0 from all others.

In two dimensions, there is

a trivial solution: the dots are identical (i.e. at the same place), the distance is trivially zero.

You never said you want Euclidean solutions :-). If the distance is defined by discrete metric, then the distance between any non-identical dots is trivially 1.

EDIT: answer to how many possibilities there are:

for the trivial solution - one

for the non-Euclidean - infinity. And there are other non-trivial metrics you can use, e.g. Chebyshev distance works as well.

In two dimensions, no.

Instead of ten, the most you can get is three dots all at the same distance from each other.

To see why this is, let's start with two dots $A,B$ a given distance apart (say 1 unit). Where can we place a third dot which is 1 unit away from both of them? This dot must be on both of the radius-1 circles centred at $A$ and $B$, and these circles only intersect in two points: 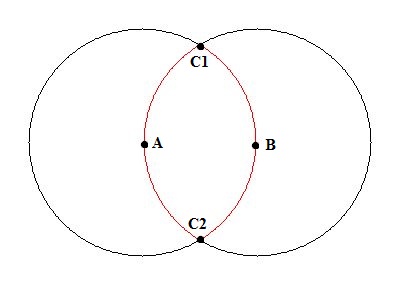 The two points $C1,C2$ aren't distance 1 apart, so the most we can get is three dots, forming an equilateral triangle in the plane.

In three dimensions, no.

A similar argument in 3D space shows that the most you can get is four dots all the same distance apart, forming a regular tetrahedron in 3-space.

Only in nine or more dimensions.

As Deusovi correctly says in his answer, the general solution in $n$ dimensions is the vertices of a simplex (the higher-dimensional analogue of a triangle or tetrahedron) - such a shape has $n+1$ vertices, all of which are equidistant from each other, and it's impossible to do better than this. So in a space of dimension 9 or higher, it is possible to find ten points all the same distance apart. But we'd need to ask a string theorist for that ...