Spot the pattern. There is none

Look at these pictures:

What's the next picture?

As requested, bellow is a set of possible answers. You don't have to look at them to find the correct answer. 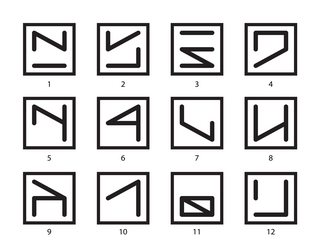 The next picture is

There is exactly one diagonal line in each picture, which seems to rotate between four positions/orientations. Following this pattern, the next picture should have a forward diagonal line in the bottom half.

The vertical/horizontal lines seems to follow those on a 7-segment display: although the aspect ratio is altered, the vertical lines seem to be split into two components, while the horizontal lines are always intact. The lines themselves don't show anything notable, but the segments that aren't visible (the negative space, in a way, presumably hinted at by the "there is none" in the title) form numbers. In fact, they are the digits of pi (3.14159...). The next digit of pi is 2, so taking the segments that don't appear in the 7-segment display of 2 and combining with the diagonal line yields the final answer.

10
Fill in the blank to win
14
IQ-test-type question - sequence of large triangles with black and white small triangles in them
10
What is the answer to this Bongard problem?
19
OK, now listen up - there's a pattern here
8
Nine, Seven, Gibberish, then what?
5
What's the next pattern in the sequence?
1
What's the number in the last cell according to the pattern?