Suppose that the chess board is not a 2D square, but a cylinder, as shown below: 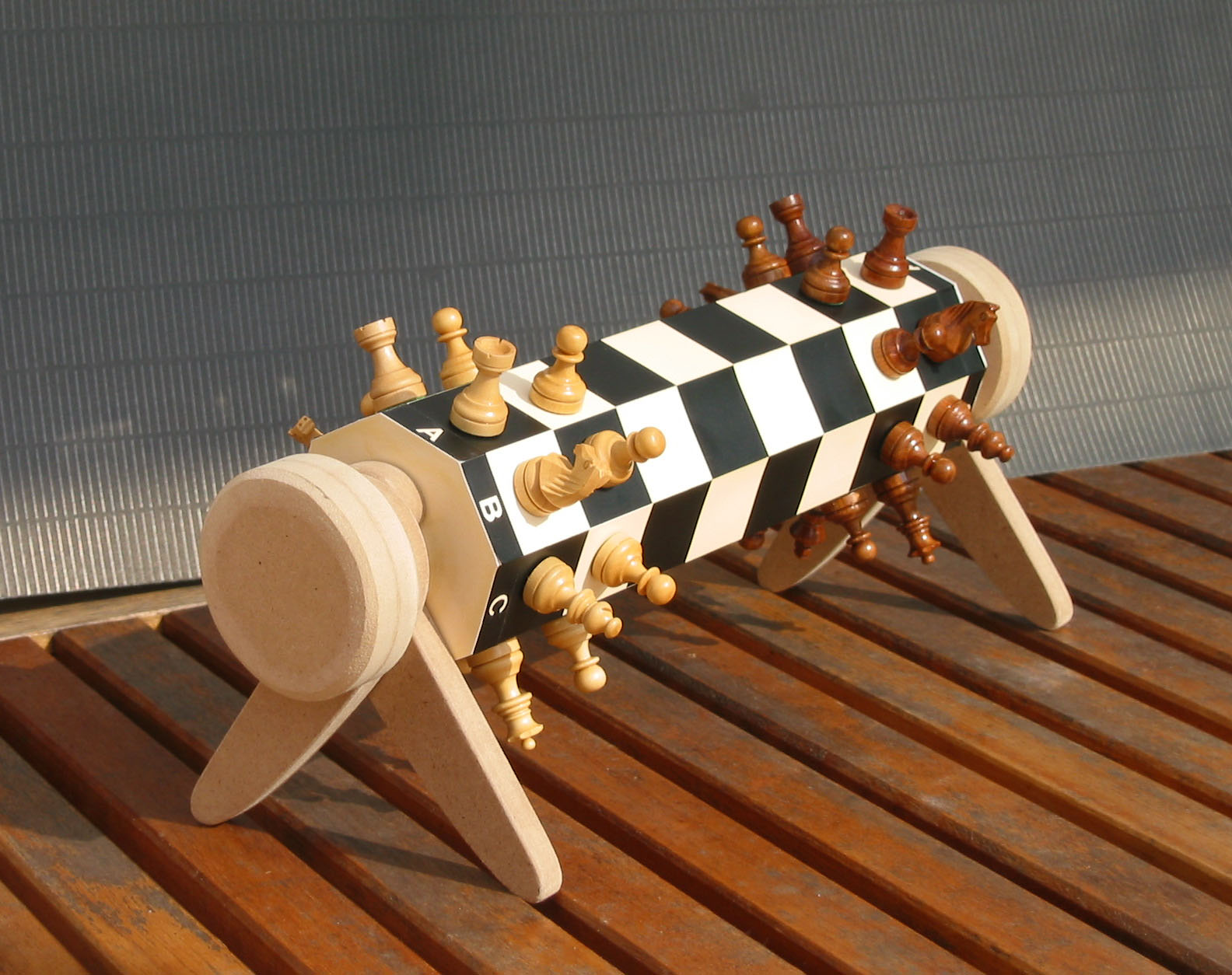 In that case, both players still can make queens, but one king and one queen is not enough to checkmate the opponent, simply because there is no corner to drive the opponent king. Consider the below position in a square chessboard: 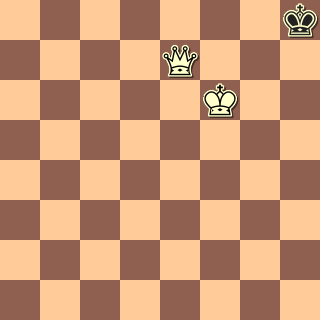 If it is white's move, then Qg7 is mate. If it is black's move, then black has to play Kg8, and Qg7 is still checkmate.

This mate exploit the fact that black king could not escape from the corner the move before. But if the board is cylindrical, then black has the move Ka8!.

On the other hand, if white had a pawn on b7, then after Qg7, would have been a checkmate because unlike 2D board, white queen also controls the a7 square. 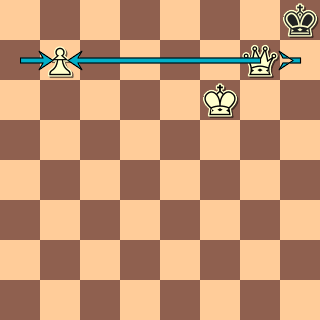 So, the question is:

What is the minimum total value of the pieces that you can deliver a forced checkmate as white, in a cylindrical chessboard to a single black king?

Note that forced means you cannot assume a position, but only a material balance.

The values for the pieces:

If a pawn promotes to any piece, then it means the value of the pawn is changed to that piece. The score is calculated by the final position on the board.

I have modified the value of the knight, because it no longer is a passive piece at the edge of the board. On the other hand, bishop still controls the same amount of squares.

As @Sleafar pointed out in the comments, you can actually deliver checkmate with a queen and a king in a cylindrical board. But it is still 9. What is the minimum?

This question needs a lot of work. For example, a single queen is quite enough to force the opposing king to one of the two edges and then force a checkmate. (From the sample ”impossible” position given, Qb7 forces a mate in two.)

The worst problem is the scoring, though. I claim I can mate the king from any reasonable starting position with

five points. I start with a bishop and two pawns.

As to the strategy,

barring pathological cases, I can easily promote both pawns. I choose a queen and a rook. Then I use the overwhelming firepower to forcingly sacrifice the bishop for no gain.

Then I easily force the king to one of the two sides. (I chose the top side in the example.)

with the rook guarding the seventh rank and the king on the sixth, I use the queen on the fifth rank to herd the opposing king to this position with black to move: 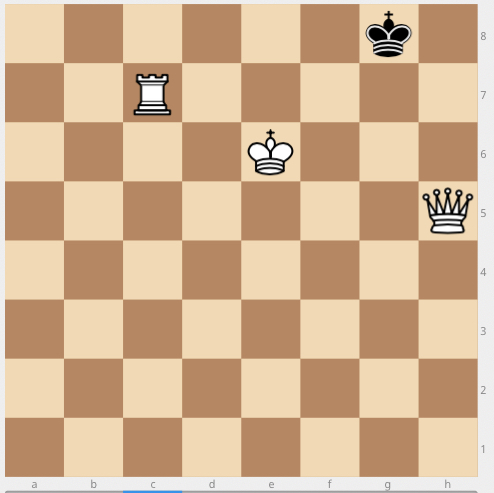 Then black only has one possible move, after which

I sacrifice the queen, forcing the king into opposition, and mate with the rook on the eighth rank. This counts as five, since the problem explicitly states that ”the score is calculated by the final position on the board”

I know this isn’t what OP intended when he wrote out the rules for the puzzle, so please regard this more as a ”pointing out the glaring loophole” thing rather than as a serious answer.

checkmate the majority of positions with a rook, pawn and king (6 points), without promoting the pawn. If pawn promotions are allowed, some king + pawn vs. king endgames can be won because king + queen vs. king is still a win; e.g. from the first diagram in the question, play 1. Qb7 Kg8 2. Qg7#.

and the Black king is already on the back rank, with your rook on the seventh. Move the king on the sixth rank, and advance the pawn to the seventh rank (but make sure it's not blocked by the opposing king, as that would be stalemate; use the rook to drive the Black king away). This limits the Black king's space to five fields. The rook can freely move between the squares next to the pawn if necessary to avoid being attacked.

If the King is not yet on the back rank, but still higher up the board than the pawn (as Sleafar notes), you can use the same procedure to drive the King a rank up the board. That will make this endgame winnable at least than 50% of the cases (and, given the nature of chess games, where kings and pawns tend to stay close to their home ranks, way more than 50%).

Edit: This solution doesn't seem to work I'll leave it to show how having a cylindrical board can affect endgame outcomes - sometimes counterintuitively !

is to mate with

The usual mating procedure with KBB vs K in standard chess is also effective in cylindric chess, because the range of the bishops isn't stopped by the sides of the board, and prevents lateral flights by the bK. Said otherwise, you don't need a corner to mate with KBB (unlike with KR or with KBN). Edit: well, you do!

during this whole sequence the bK has never been allowed to cross the "outer border" between the a- and h- files. Notably, the wB prevented ...Ka8-h8 in the final moves from either d4 or b6. Edit: however, one move before mate, Black can play Ka8-h7 instead of Ka8-b8. This possible diagonal flight spoils any try to mate with KBB vs K.

With a King, Pawn and Rook (6 points), it is straightforward to force the black King back toward the final rank.

The key is to have the rook protected by the pawn, with the black king on a higher rank. Eg.: 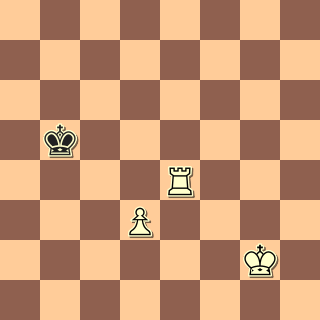 From here, the white king chases the black king to get opposite it (same column, 2 ranks down), and with the black king at least 2 columns away from the rook, and white to move. 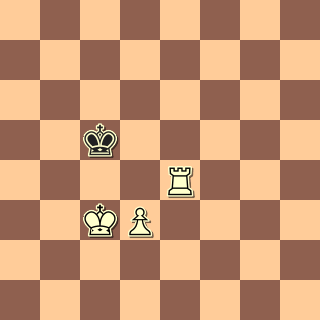 Since black can't run away horizontally forever, the white king can definitely catch it. Also, white can adjust a tempo if necessary by moving down a rank and back up. So white can definitely force this position.

From here, white white advances the rook one rank, forcing the black king to retreat. White then advances the pawn on the next move to protect the rook and repeat the process.

If the black king retreats before being forced back, eg.: 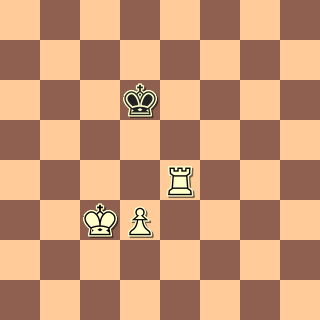 Eventually, the black king is on the 8th rank, the white rook on the seventh, protected by the pawn. The white king chases the black king to be opposite it, then advances the rook for mate.

Thus, white can force a mate from any starting position where the black king starts on at least rank 3 and is far enough from the starting positions of the white pieces that it cannot immediately capture one of them.

I don't think it's possible for a white to force the black king off the first or second rank, but this solution is generic enough.

If you need a solution that works from any position, then replace the pawn with a bishop and white can force a win from any position (where white can't make an immediate capture). That would be a total of 8 points, still cheaper than using a queen.

16
Replace a piece to checkmate
10
Queen & "paralyzed" King vs King
6
The Minimized Dropmate
32
Mate in one with NO PIECES?
10
Missing checkmates in one
4
Chess Construction Challenge #4-Excelsior!
5
Anti-Chess Squares
2
Checkmate in Last Move
4
Longest chain of checks and captures