Christmas was always your great aunt's favorite holiday, but it looks like this might be the first year that you'll be celebrating without her. Nobody really knows much about where she came from or who her parent were, since she was found on your great-grandparents doorstep as a child. All she had with her was the tartan she was wrapped in and a label with a single word that became her name, Noel.

While she was already five or six when she was found, she didn't speak a word of English. When she got older, she told the most wondrous tales of the land she grew up in, a world of lights and sounds and, from some of her descriptions, technology far beyond anything that should have been around anywhere in the fifties. While your great-grandparents raised her as their own, she was always curious about her home. But she was content to be part of your family, and it wasn't until a couple years ago, when her husband of forty years passed away, that she started searching for her homeland in earnest.

She disappeared last July, without a note to anyone about where she was going. When her car was found abandoned twenty miles from the Canadian-Alaskan border, everyone assumed the worst. While you were the last one to hold out hope, even you were starting to realize that there couldn't be much hope. Then, just last week, you received an unmarked package, containing Noel's old tartan, an ATM card with a downright shocking sum on it, and a short note "I'll be home for Christmas, so join me, if you'd please."

It seems clear that Noel has finally found her home, and wants you to join her for Christmas again! But where?

Here's a digital reconstruction of the pattern on the Tartan: 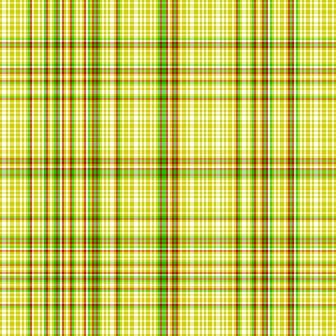 Where should you go to meet your great-aunt Noel for Christmas?

I meant to add a hint before New Years, but I spent the holidays in an Internet-Challenged locale.
The nice thing about certain tartans is that the horizontal and vertical patterns are the same. Perhaps most of the Christmas Tartan is redundant information. Christmas may be past, but you still might be able to meet her before the end of Christmastide on January 6th!

It looks like there are three main colors in the Tartan, not counting the blank spots. Or is it just 2 colors stacked on each other in different ways?

Noel's stories often included technology far beyond what should have been available at the time. One of the stories you remember most vividly involved a system for easily scanning packages into a computer system.

Transcription:
The pixels in the second row (where there are no horizontal lines) are the following colors, from left to right. (r-red, g-green, y-yellow, w-white).

If you look at the lines

In the hopes that others can springboard off of this...

If you treat orange lines as white and green lines as yellow, then follow across the top of the image, the white lines form Morse Code: NEITHLUIFEEDIEBASLINVIUIREE