With a heavy heart (as if), I have trapped @Deusovi behind a never repeating, fractally recursive, infinite, unsolvable labyrinth. To keep him busy, I added a couple of teleports. 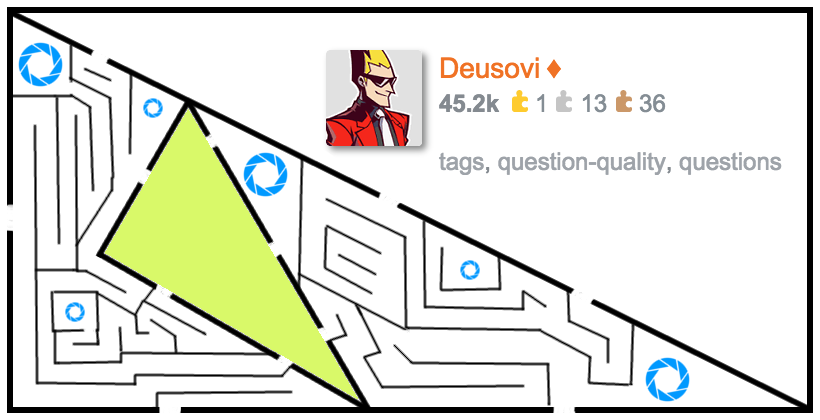 The green part of the maze contains a copy of the maze, scaled down so that it exactly fits.

Fun facts about this puzzle:

For full meta effect, I should beat Deusovi to the answer before he sees this puzzle ... :->

This puzzle can actually be analysed quite rigorously ... 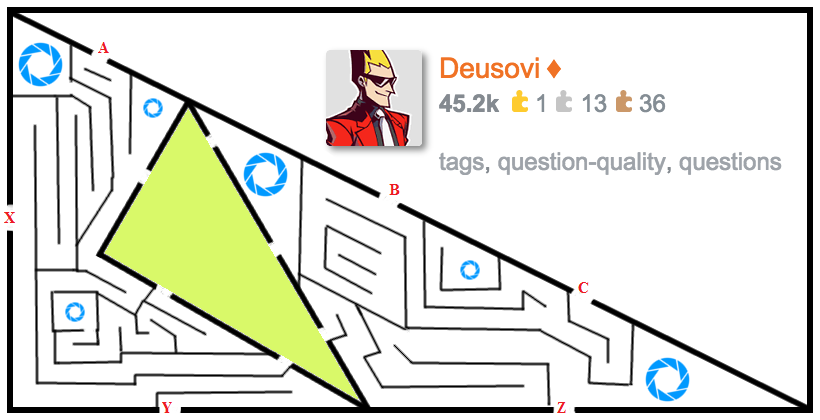 This question already has very good answers, but I wanted to share my intuition for why the given maze has no solution. This is a visual approach to the problem that I find a lot easier to grasp. It is however not a rigorous proof.

This approach strives to demonstrate that the maze is equivalent to two disjoint paths infinitely spiraling towards each other. The following "tricks" will be used repeatedly in this demonstration:

Repeated application of these "tricks" will leave only disconnected components of the maze.

First let's look at the original maze for reference. 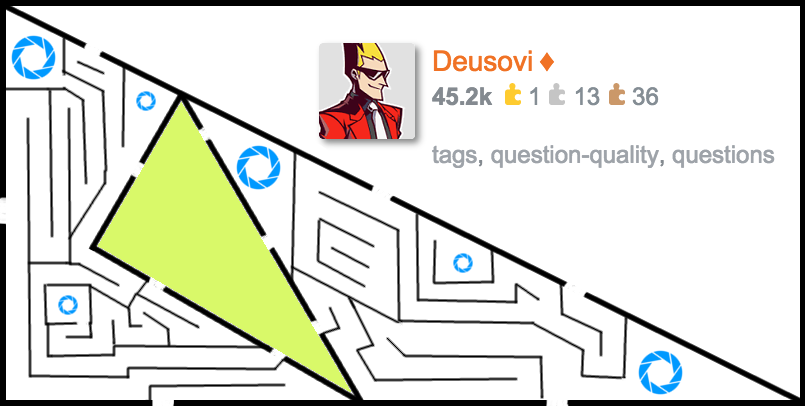 We can remove all of the unnecessary walls to clean things up a bit. 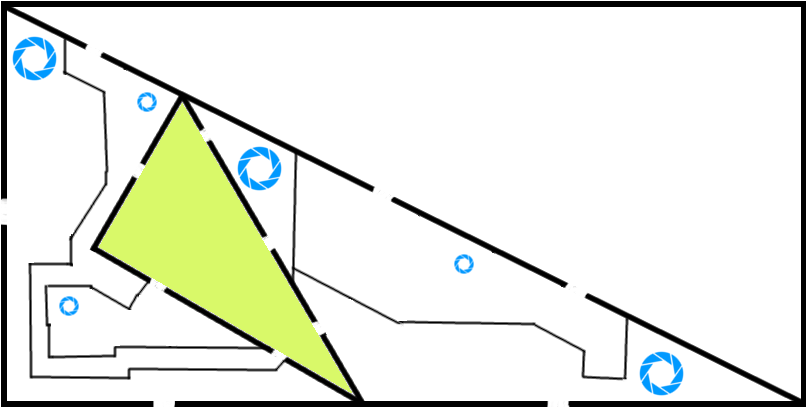 In order to better see the spiraling paths at the end I think it's best to stretch the maze out into a rectangle. We will start doing that now with the outer edge. Since this removes the distinction between the entrance and the exit of the maze we will just have to remember that the doors at the top are the entrances and the other outer doors are the exits. 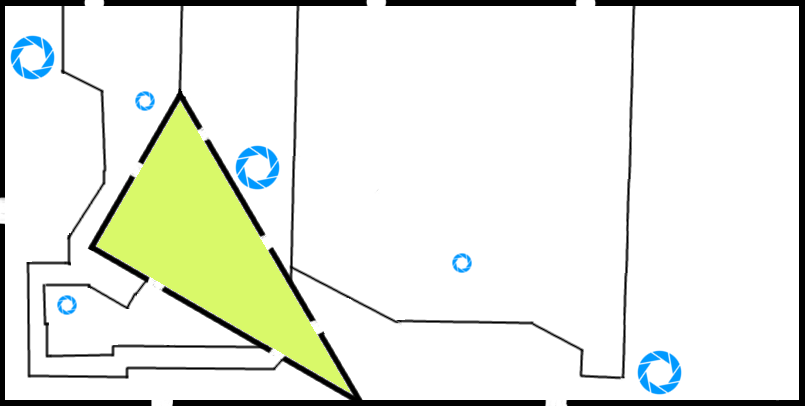 At this point let's also clean up all of the squiggly inner walls and make them straight. 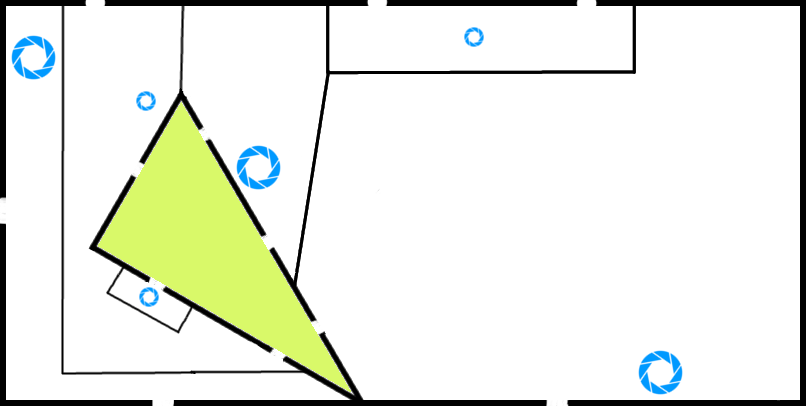 As I mentioned before, I would like to stretch the maze into a rectangle shape. So now is a good time to start working on the inner copy of the maze. We start by rotating it until it is parallel with the outside. 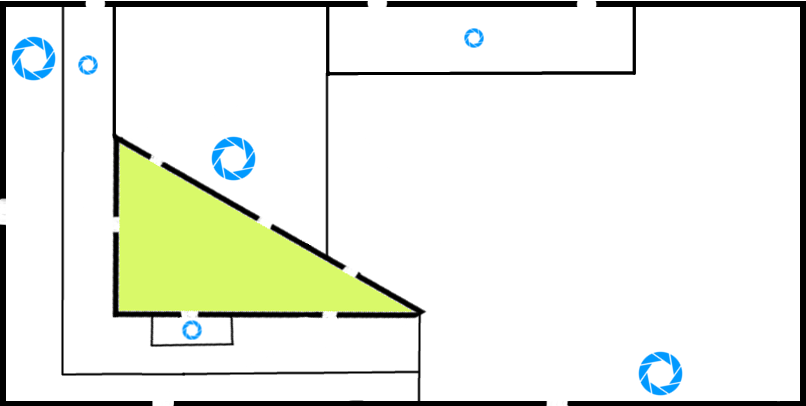 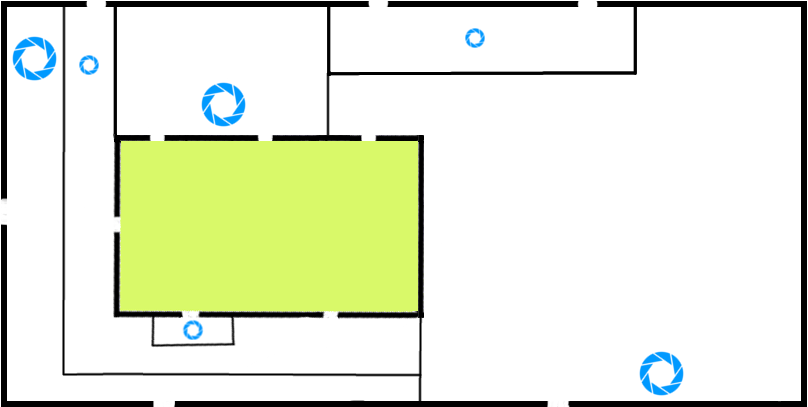 Now let's move the left-side door on both the inner and outer part of the maze to the bottom, and also make everything nice and centered. 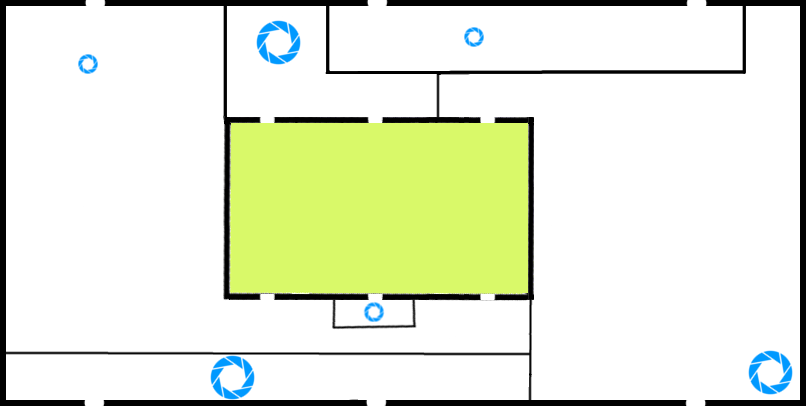 We are very close to being able to see the spiral shape. Let's stretch the top-right room to add an explicit wall between the top-right and top-left rooms. We can remove this wall in a later step. This step also serves to make whole layout look more symmetrical. 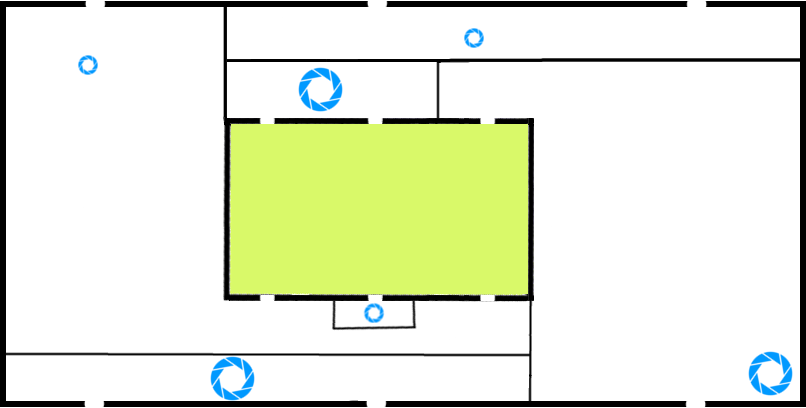 The spiral becomes evident once we remove all of the walls between rooms that share the same portal. 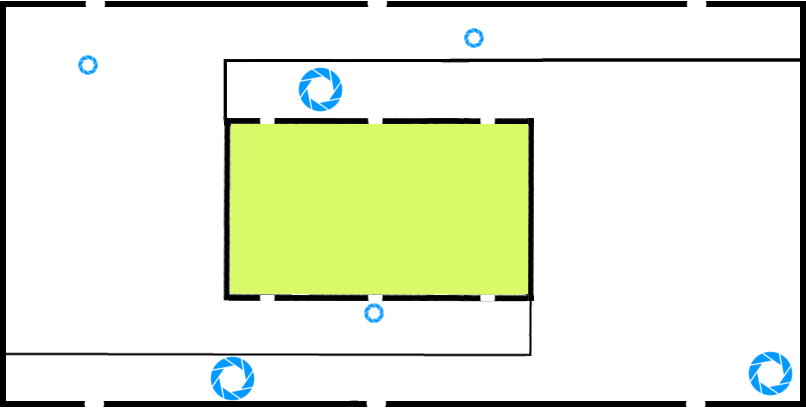 And then remove all of the duplicate portals in the same rooms. 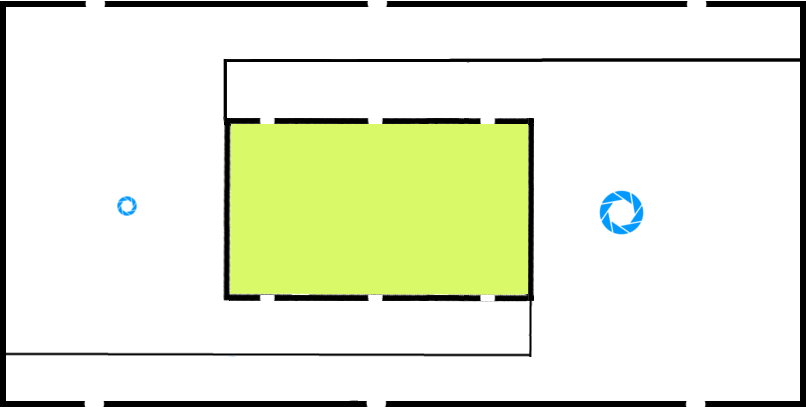 The portal on the right no longer goes anywhere so we can remove it. We can also start looking a level deeper. 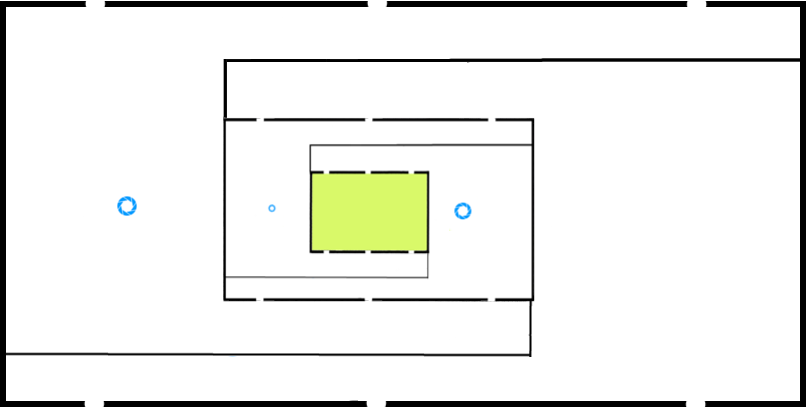 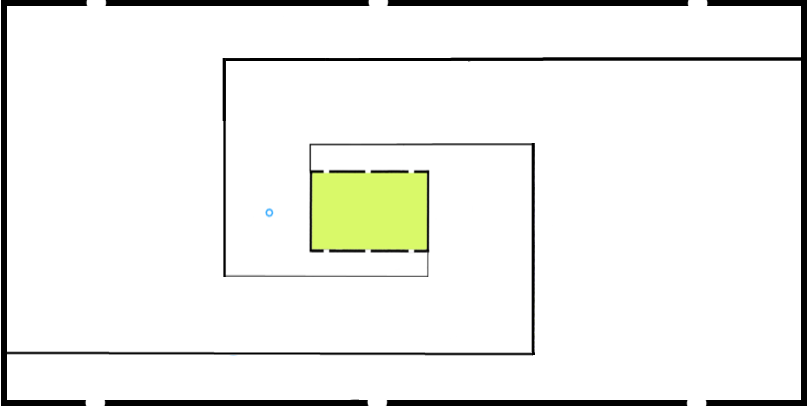 From here we can just repeat the process indefinitely. 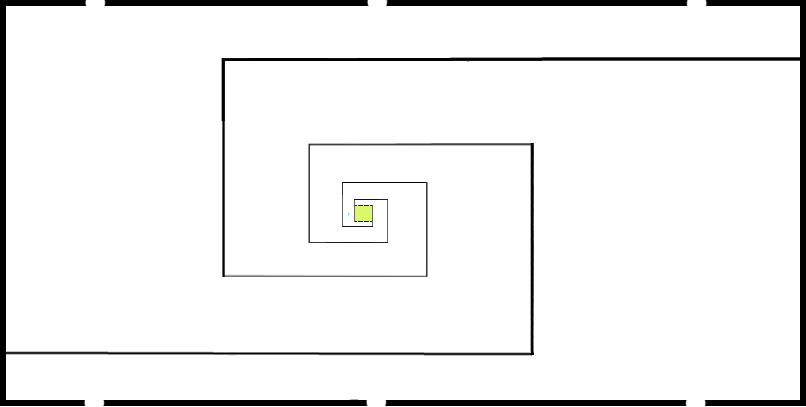 The path starting at the top at the entrance and the path ending at the bottom at the exit never meet given that the maze repeats itself infinitely. They just spiral around each other towards infinity.

Since I obviously cannot accept any answer (If I actually got Deusovi's attention stuck in the maze, the appearance of a green tick would ruin everything), and this seems to be getting reasonably much attention, I thought I could post a kind of "Making of" featurette for the maze that goes through some of the features that weren't yet mentioned elsewhere.

All the claims made in the question itself are more or less true. There really is no way out.

In addition to that, the maze is undecidable by brute force methods. That is, no matter how advanced your paint bucket tool, it won't be able figure out if a solution exists or not. (An alternative solution, using the paint bucket tool, how else, can be found below.) To achieve this, I had to make both the trapped path and its complement, the "rescue party path" infinitely long, since proving that either of them is finite would have easily solved the problem.

The general shape of the maze is borrowed from the Pinwheel tiling. The angle of the smaller copy is $arctan(\frac 1 2)$, which is "A number that we believe should be at least irrational [when divided by $\pi$]."

This is the first maze I've created in decades, but I did remake this one about twenty times, with varying levels of success. So this was not a "this puzzle should fit well" type of effort, but more of a "let's see if I can't make a maze that fulfils the specs in the meta answer".

The teleporters were an afterthought; I needed them because the puzzle shape I had chosen had the green area separating parts that needed to be connected. The "teleporting between recursion levels" thing was pure serendipity, I only got the idea when trying to decide what kind of symbols to use for the teleporters.

Speaking of which, the teleport symbol is actually the Aperture Science logo; more specifically, a version of it claiming to be in the Public Domain. (https://en.wikipedia.org/wiki/Locations_of_Half-Life#/media/File:Aperture_Science.svg). The smaller one is scaled down by a factor of $\sqrt 5$, so its area is $\frac 1 5$ of the bigger one. Counting the triangles in the pinwheel tiling, this should be just about correct.

And finally, not because RaT's excellent analysis has anything wrong, but more because this one might be a bit easier to follow, here's an

It's pretty easy to see that the puzzle has two separate sides, with the recursive part in between. To see this clearly, point your teleport aware paint bucket tool on the outside using one hideous colour, and on the inside using another. Like this: 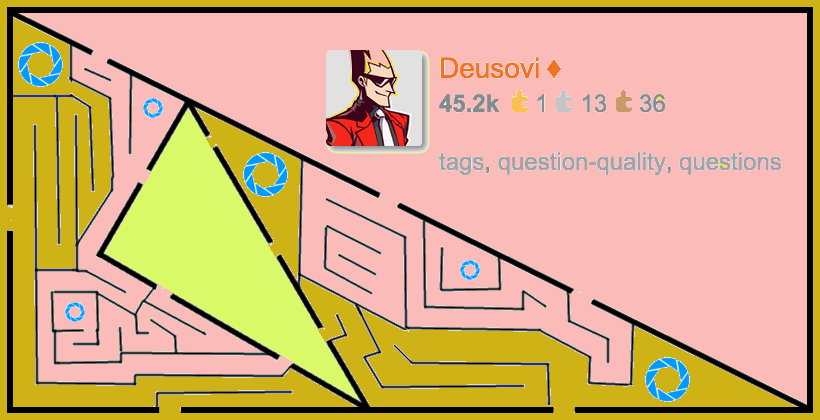 Then, establish an invariant. Notice that the ways to move to another recursion level (that is, to a different scaled version of the puzzle) are very limited.

Therefore, even though both sides allow for arbitrarily long or complex paths, never ever will the sides meet.

Oh, and thanks for the hat!

33
A Masterpiece: A mirror or an ABC?
33
Consecutive Vowels
43
lolcatz can haz ur infinit cheeseboard
11
The Ultimate Deusovi Honeypot
9
A Fractal Sudoku - SS#13
6
Longest path in a rotating maze
0
Every Answer To All Puzzles Here - Secret Found