Who wins in this tic-tac-toe game?

Jack and Jill are playing Tic-Tac-Toe, with Jack being Os and Jill being Xs. Now, being perfectly logical beings narrow-minded one-move-foresight beings, they move following these rules: 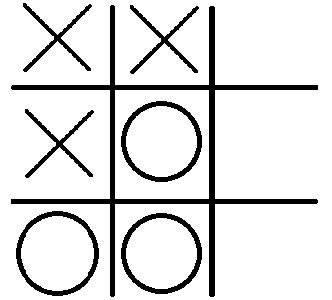 If Jack starts first then, Jack's first two moves will be one of these:

In both A and B, the first rule is broken, because Jack could've placed his third O at the top-right or the bottom-right squares, respectively, to win. But he didn't.

As for C, we know that Jill first two moves, with Jack's moves from C above, will be one of these:

There is no scenario where Jack plays first and the rules don't get broken. So it must be Jill who started this, and so she will win (because it's her turn).

NOTE: I actually made a list of all scenarios (green ones mean OK, red ones mean not OK) to check whether the other assumption is also true. It is true, and the only scenarios that follow the rules are these four:

Jill (X) will win as she went first 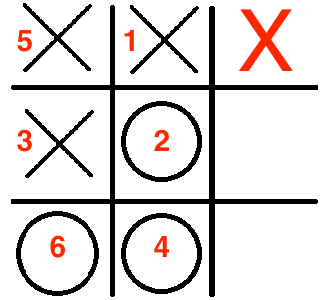 At least this is the only sequence I got :)

I assume they play to win while putting X and Os:

Jill is supposed to win

Jill has started to put X first as shown below.

If O was started to play, he would have won already after the third move whatever Jill played to block or win.

To explain it more: 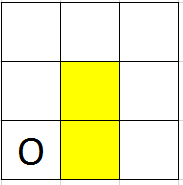 In the example above, if Jack would have started to play on this corner, whereever Jill puts his X, Jack would put his O in the yellow part and would have forced Jill to put her X on the right hand side of the board so it is impossible. 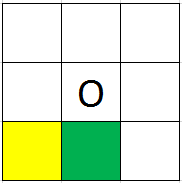 Let's assume Jack put his O in the middle first, his second move cannot be the yellow one as explained before, so his next move could only be Green square.

For the green sqaure: 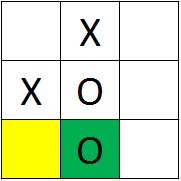 So the play could be like below and for sure

Jill won this game as the next player would be her.

Whomever moves next, wins. What's the puzzle? OK Assuming what needs to be assumed. We don't know who moved first, so we assume one and see if it leads to a contradiction.

In fact we assume X just moved. Now clearly X just moved to top row, centre column, because either of the other two moves violates "block opponent if you can". Then O's last move is a contradiction, because whichever one it was, he could have won instead. So O moved last, and X wins.

Not the answer you're looking for? Browse other questions tagged logical-deduction board-games paradox or ask your own question.

13
Devising a sudoku where the rows are the moves for a draw in tic tac toe
9
Who Wins At Horsie-Push?
4
Who won that game?
17
What is the optimal strategy for this triangular board game?
7
I'm stuck on this game of Slitherlink
3
What is the name of this game?
19
Tic tac toe - Sudoku: A variation in which the centre box defines the layout of the other boxes
8
What was the last move made in this game?