The tilted labyrinth - Can you find the fastest path in this 3D-puzzle? (Simulator now included.)

This is a puzzle was inspired by the board game labyrinth, which I very much enjoyed as a kid.

It either requires very good 3D-visualization skills in your brain or some paper & scissors work. (Hence mechanical puzzle).

Thanks to Kevin, there is now also a Javascript simulator for this puzzle, which makes things way easier.

Imagine you have a labelled board of 25 fields like the following: 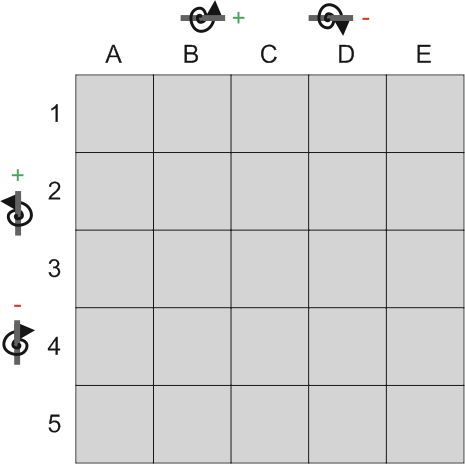 You also have 25 dice which are all build up by the same mesh: 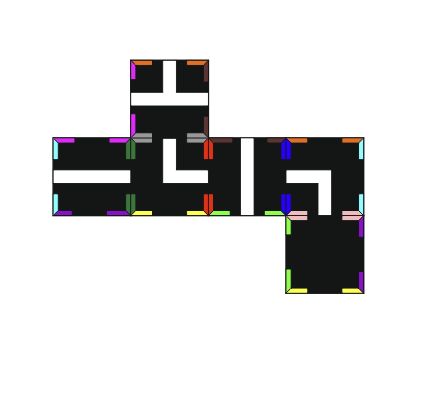 These dice are placed on a 5x5 field grid to create a labyrinth with the faces showing upwards. 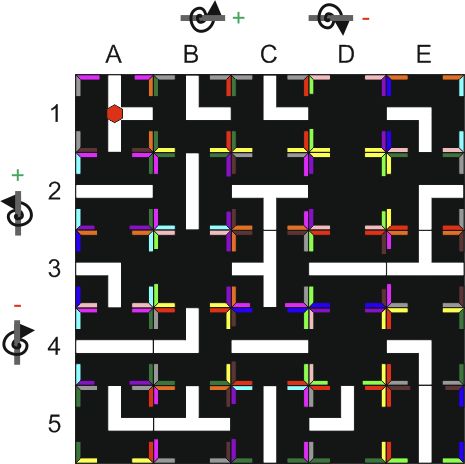 You start out on the top-left position (A1), and you goal is to reach all other three corners (E1, E5, A5 ) in arbitrary sequence. You want to do this with minimum amount of steps. Note that 'passing through' one of the corners in a single move is valid for the purpose of the goal. (You do not have to end a move in a corner. )

Starting from the start position given above, you first all dice of column B in + direction. (Imagine the top of the dice tilting downwards.) 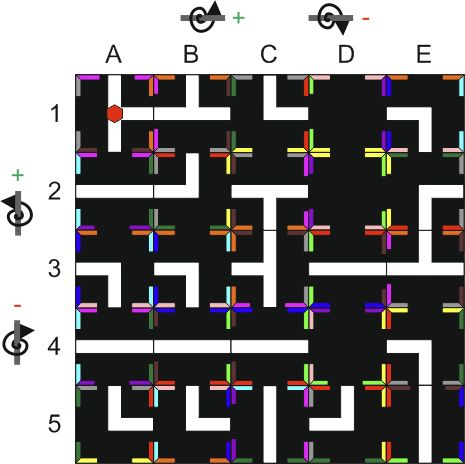 Now you move the marker. 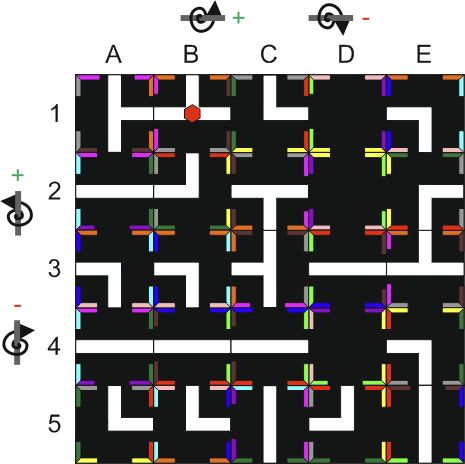 So the whole step would have the notation:

What is the minimum number of steps you need to visit all 4 corners of the grid (starting in A1) from the given starting situation:

You have to give all steps in the notation explained above.

The current record for this puzzle is 7 moves.

NEW ANSWER: 10 Turns (I used Kevin's interactive tool for this one)

Just to get the ball rolling my moves are as follows (I created an interactive version in Excel, so there is plenty of margin for error.):

Not the answer you're looking for? Browse other questions tagged geometry mechanical-puzzles optimization visual or ask your own question.

16
Rotationpuzzle in hex - The journey beyond the tomb
9
What is the 'best' way to tilt through a D20?
46
A-maze-ing Dice
14
4x4 Sliding Puzzle with a twist
2
The Tiled Labyrinth Returns
1
How to swap adjacent corners?
9
16 Step Switchover
9
Merging knights
5
Merging knights and blocking rooks