Here's a masyu puzzle for you. The rules are as follows 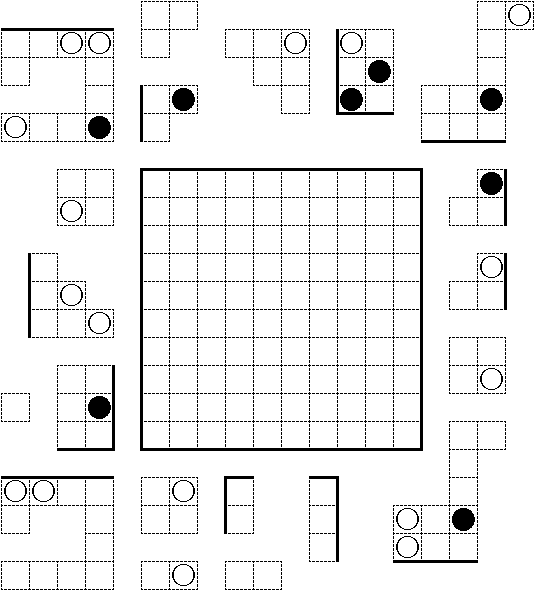 Oh dear, I must have dropped and broken it. I'm sure you can still figure it out. A few rules for putting it back together.

I thought it was a shame such a nice puzzle didn't have an explanation of its solve path. So here's mine! Click through to get the (large) full-size images. "Connectivity deduction" means "I put a line here because if there isn't a line, a single connected loop is now impossible". Shaded pieces mean I've placed them, and shaded parts of the grid have pieces placed for sure.

Part 1: Putting some pieces in 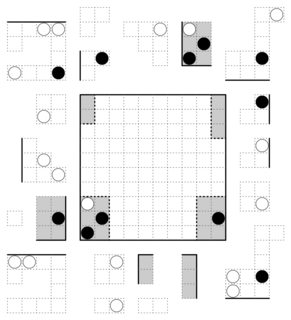 Place the corner pieces. Only one place for each. 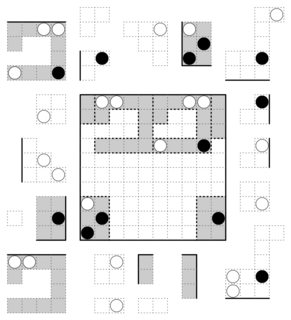 An edge can't have 4 white circles in a row. The middle two wouldn't have anywhere to turn. So the two remaining top-edge pieces must be placed so their top-row white circles aren't adjacent. 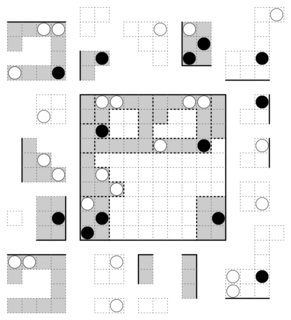 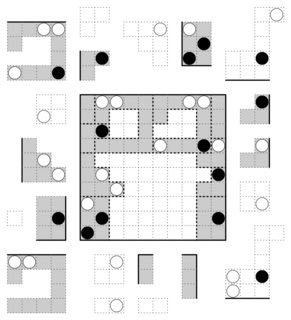 There can't be a "stack" of black circles leading away from an edge. One couldn't satisfy the go-straight-twice requirement. Therefore the black-circle right-edge piece can't go on the top, and the right-edge pieces can be resolved. 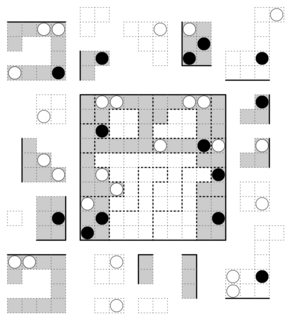 Both bottom-edge pieces have the same shape, so their outlines can be drawn (though we don't know which goes where yet). 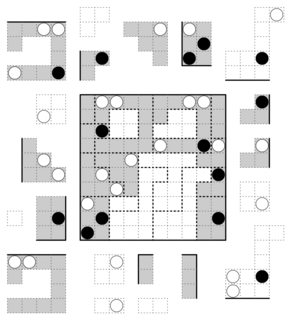 The large upside-down staircase piece can only go one place now. 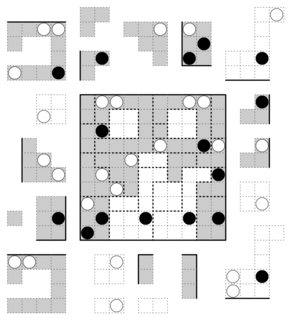 The only way to satisfy the 5 unspoken-for squares in the upper right (looks like a P-pentomino) is to use a 2x2 and the 1x1. So the 1x1 can't be used elsewhere. There is only one way to place the remaining L-tetromino without isolating a 1x1. All piece borders can now be drawn. Also both of the bottom-edge pieces have a black circle in the same spot, so let's add that in. 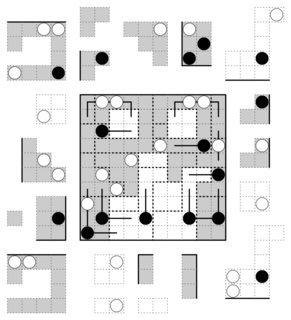 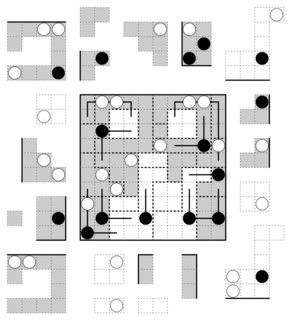 Two black dots are now effectively near edges, because they can't extend for two in one direction. After that a basic connectivity deduction along the right edge. 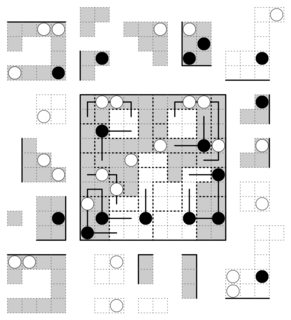 The white circles on either side-edge still need to turn on at least one side. Once they do so, then there are some effective-edge deductions to make. 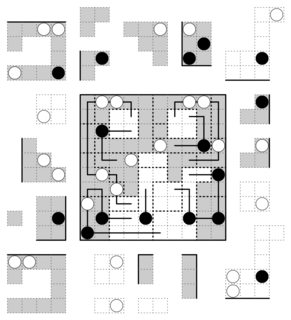 That lingering line in R2C1 can't go right or it would create a closed loop; it must therefore go down. Also some connectivity deductions.

Part 3: Putting some pieces in while drawing some lines 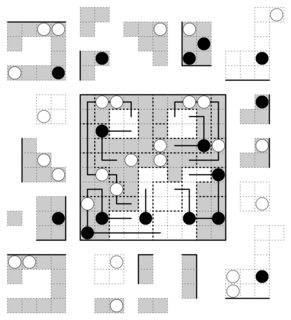 The lower 1x2 can't be the one with the white dot, because there's no room to go straight. Therefore we can resolve the 1x2s. 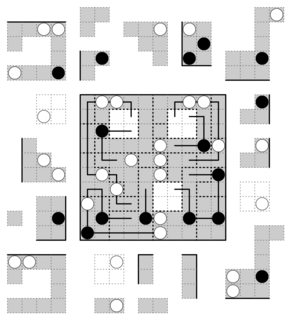 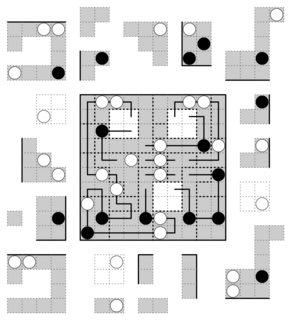 Basic deductions with the new white circles, and then some connectivity. 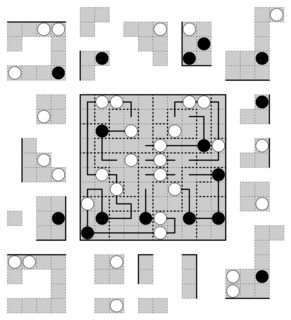 Also known as: I do way too detailed step-by-step. 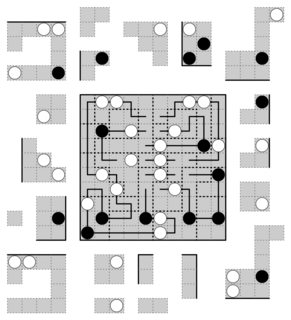 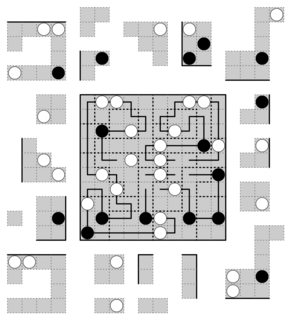 The white circle in R3C7 still has to turn, and it can only turn up. Then R2C5 must go down for connectivity. Finally the top of the 3-stack of white circles still needs to turn, and there's only one way for it to do so. 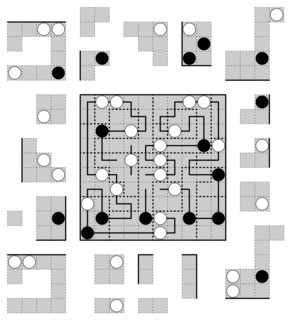 Don't-close-the-loop logic on the right side, the last lineless white circle with on-an-edge on the left. 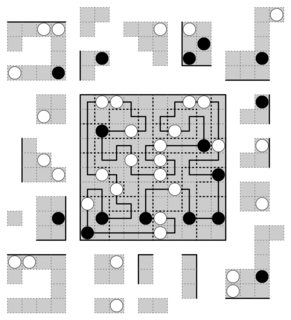 A few trivial applications of connectivity logic, and we're done!

I believe this is the unique solution: 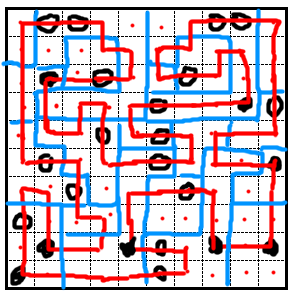 Not the answer you're looking for? Browse other questions tagged logical-deduction grid-deduction jigsaw-puzzle masyu or ask your own question.