Is this Murder or Suicide Picture Puzzle [closed]

Want to improve this question? Update the question so it can be answered with facts and citations by editing this post.

I got This Puzzle From another source on internet.

Give the answers with reasons. 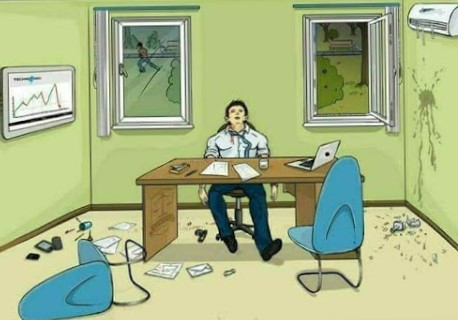 Now I am little bit confuse about the answer given in source website as I see the answers here. so now its up to you to give me a answer.

It can be suicide too, when you think from another perspective. If you think like this --> The guy was frustrated, thinking about something which happened in his life. He was drunk. He smacked the bottle into the wall with anger for the same reason. Threw everything off the table to the floor with frustration. Wrote a suicide note. Kept it on his table. Took a gun in his right hand, shot the right side of his forehead. Blood splashed on the walls. Gun fell down off his hands.

I think this is a murder.

1. We can clearly see that man is left handed(glass of water or whatever is on left side according to him) and the gun is on the right hand side and there is a man running outside(may be the murder) so we can conclude that this is a murder. 2. The things are scattered may be there was a fight between the murderer and the the dead man 3. Third the second window is open means the murderer jumped from the window after killing the person and set the room as it is a suicide

I think it was:

Before I explain my reasoning I want to say I kind of cheated by looking up a higher resolution image and some of the evidence I found I would not have without the better picture. High res image here

I want to start by addressing the screen on the wall. It shows some sort of financial looking data and it's going very bad. One of the papers on the floor and one on the desk show similar data. I think the man was running some sort of business (law firm going off the logo on the desk) and it has suddenly taken a turn for the worse, which caused him to be upset.

There is stuff strewn about on the floor that appears to have once been on the desk. It looks like it could have been pushed off in one quick sweep. From the mans perspective the push would have been to the right and away from him. The computer could have been missed by this swipe but most of the other items on the desk could not have.

This suggests that the items currently on the desk were placed after the rest were thrown off.

If you look at the splatter on the wall it looks like the bottle of some sort of dark liquor was thrown against the wall and shattered.

If you look at the window it appears like the bottle would have to have been thrown before the window was opened.

Outside the window we see a man running, but we also see 3 foot prints.

Since the foot prints are so clear it seems unlikely that a person could have entered or exited the office through the window without leaving foot prints of their own.

Since the man is running from the general direction of the other footprints, I think all footprints are his. That means the urine on the tree is his as well.

The placement of the gun could be explained by the man dropping it after shooting himself, or a murderer placing it there to make it look like a suicide. If there was a murderer they didn't do much to straighten up the room (after a potential struggle) so it seems that whether this was murder or not the room was messed up when the man was alone.

Whether it was suicide or murder I think the following events happened before the shooting:

1. The man sees the information on the screen and is understandable upset.
2. He goes through the papers on his desk to see if maybe the information on the screen is inaccurate.
3. Upon finding overwhelming evidence that his business is failing he gets angry and kicks a chair over and throws the items on his desk off.
4. He opens his desk drawer and pulls out his liquor and a glass. He pours himself a drink.5. Still angry he throws the bottle against the wall.
6. He stands up, opens the window to get some fresh air to calm himself down. He loosens his tie.
7. He does a little straightening up, putting stuff back on his desk but gets distracted when he sees the graph again on a piece of paper and sits back down looking them over.

Looking at the blood it does not look like the body was moved from where it was when shot.

The man was sitting in his chair facing forward when shot. This does not indicate a struggle.

There is only one cartridge suggesting only one bullet. A pistol like that would most likely eject the cartridge up and to the right (relative to the gun). Since the cartridge is behind the desk, it was either moved, bounced off something, or the gun was held close to upside down when fired.

picking up where I last left off, I think the final sequence of events went like this:

8. The man pulls out his gun and shoots himself in the right side of the head.
9. police arrive to investigate the crime scene.
10. a man (possibly drunk) is urinating on a tree outside and sees the police and runs away. (He could probably get fined or something for urinating in a public park)
11. This is a crime scene photo taken by the police.

Not the answer you're looking for? Browse other questions tagged logical-deduction visual mystery or ask your own question.