These alien safes have no end

Well, I could solve the last safe, but what did it buy me? Just another instant-teleport and boom... here I am again!
In a single room with very few things around me, most notably a safe, and no door out. Just great. Somehow I can't fight the feeling that I'm tested in a more and more challenging way each time by these damn aliens. At least I now know how those laboratory mice feel when they are put into labyrinths for 'testing'. I hope, my observers at least consider me 'intelligent' by now...

The room only has few notable objects: 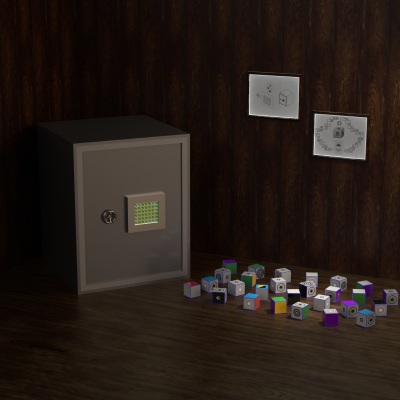 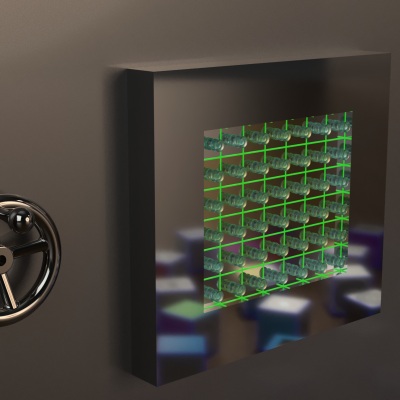 These knobs are made of a glass-like material and when I touch them, there is a sound and they sink into their according square in a sequence: First they go in one third, then two thirds, then three thirds, and if I touch them a fourth time, they come out again. The squares appear like solid metal and are hard on touch, but when the knobs go in, the matching square ripples like mercury.

The grid on the display - small grooves - is oddly illuminated. When the buttons go in, it changes in a subtle way. 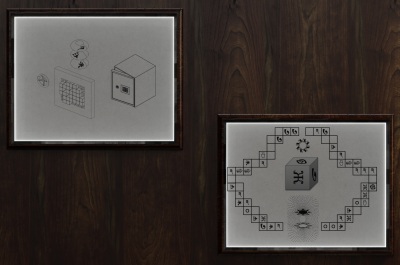 The two drawings are pencil on paper behind glass. The frame has some light-source under the glass which illuminates the displays.

The dice are rather heavy and made of some sort of metal. Different faces are painted differently. I can make out seven colors ( gray, blue, green, red, yellow, pink, black ) and some symbols.

The really odd thing is, that I can pick any of them up to investigate and carry around, but the moment I touch one, the others vanish from sight. Just like this.

Oh, and the dice are rather big. Definitely bigger than a square on the display.

I'm pretty sure that I have to push several of the knobs on the display to one of their 3 positions to get the safe open. But which ones and how exactly?

In the solution, please label each knob by row and column of the display grid, plus the position of the knob ( 3 = fully out, 2 = Two thirds out, 1 = One third out )

A few more images and links for easier puzzle solving. (The sphere is just to easy orientation) 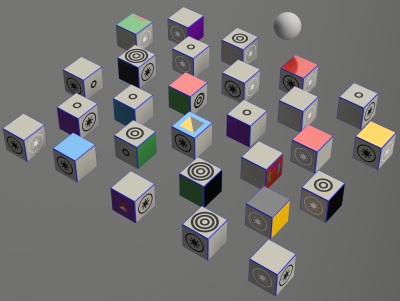 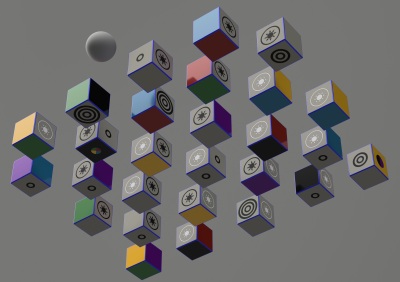 Mild spoiler to get you started:

The whole puzzle is about thinking abotu 3D configurations and moves. The stated fact that the 'in-game-you' can not 'pick up more than one die at a time' is just to emphasize the thinking-part and avoid general, unspecific answers like 'I need to put XY dices together to...'. 'in-game-you' can't put dices together like this, but he can think about what would happen if one would put dices together - just like you can (and possibly need to). In other words: doing something with the dice can not be the solution, but thinking about doing something with the dice will give you the information needed on what needs doing to open the safe.

And another rather mild spoiler:

Counting various things might give you some ideas. It is often good to know where to start from...

I've gone through all 27 blocks and noted down what was on each face. The coordinates are counting columns A-I from the top-left to the lower-right of the top view, and top-right to lower-left of the bottom view, and rows from 1-6 from the sphere down. 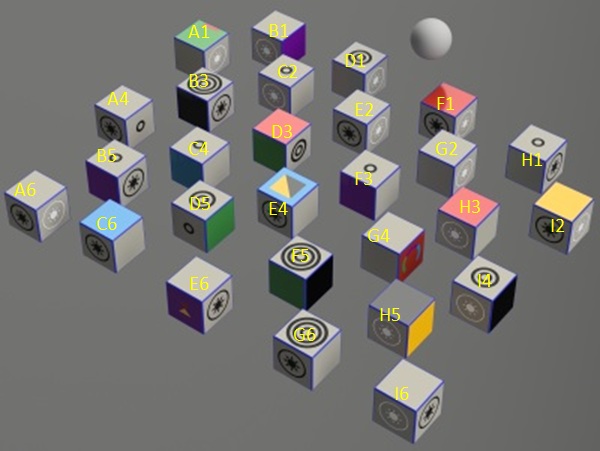 This is the third version of this, with more colors grouped together by the color coding and colors chosen to match the puzzle. The original version can be found here.

Both the image and the spreadsheet are as accurate as I was able to make it, but note that there may be transcription errors, so double check any conclusions you draw.

Additionally, the 27 cubes correspond to the 27 boxes on each side of the second drawing. Plus, the seven cubes with black and white suns on opposite sides correspond to the seven three-in-a-row sections of the layout. Combining that with the one cube each that only has one sun, I think it's pretty safe to say that the cubes need to be laid out such that each black sun is attached to another cube's white sun, with the two cubes that only have one as the two ends.

Presumably, the symbols on the diagram indicate which face should be up on each cube, and the correct layout will tell us something. But I haven't worked out any correspondence there, yet.

Not the answer you're looking for? Browse other questions tagged enigmatic-puzzle visual three-dimensional or ask your own question.

57
A well balanced puzzle: Logic puzzle(s) in visual disguise
19
End of the Maze
27
Dotting the eyes and crossing the teas. But where is the PIN?
22
This is an opportunity. Can you take it?
21
Is humanity truly doomed?
30
A simple alien safe
29
Oh no, it's another safe!
61
You have 13 minutes to unlock this safe
16
This is more than just a dream
12
Attack of the Asthmatic Enemy Omnivores