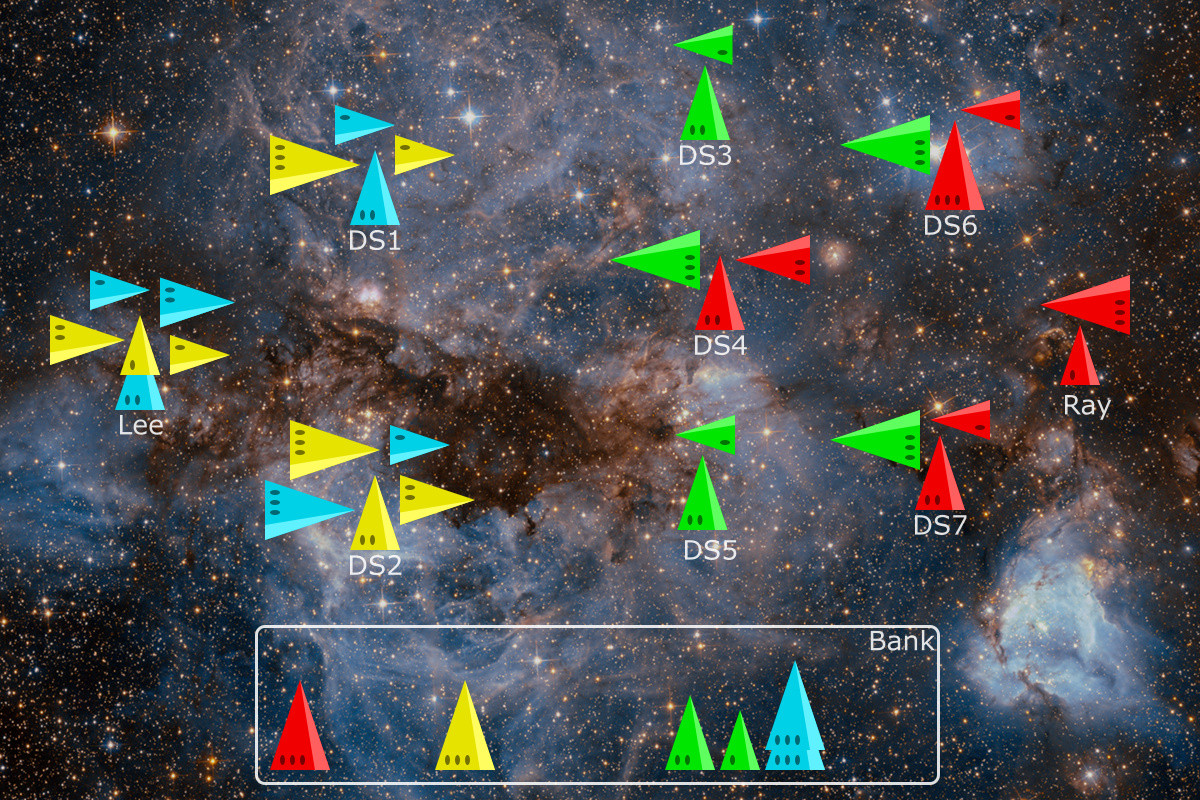 This puzzle is inspired by the other Homeworlds puzzles introduced by @Destructible Lemon. You should explain how Lee (the player on the left side) can beat Ray (the player on the right side) in 5 turns. Ray will of course try to prevent this if he can.

I have uploaded an Inkscape template in case you would like to create similar puzzles yourself. The background for the puzzle is from here.

board-games outer-space homeworlds
Share
Improve this question
edited May 31 '20 at 20:44

sorry it took so long. :p 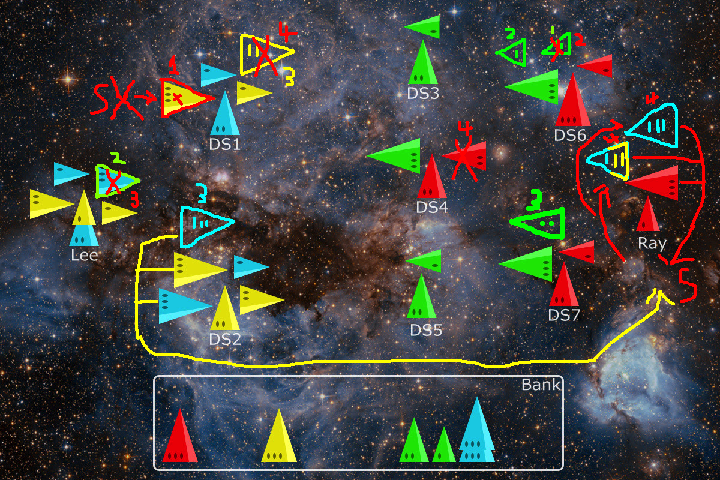 if ray chooses to catastrophise either of DS4 and DS3, we will be able to change some of our pieces to reds next turn, and explode his homeworld on turn 3. if he does not do something, we are able to catastrophise with our large blue changing the large yellow to green or red, and using the remaining two changes to change some pieces on DS 1 and 2 to red before exploding the homeworld on turn 3. in fact, if he does not get rid of the large red, something will be catastrophised. so he builds it on his homeworld, by sacrificing a green on DS3 (small) to build, so it cannot be catastrophised in one turn.

turn 2: we would like to attack and capture a red, but Ray would just capture back. we will instead sacrifice a blue large to change the two yellows to greens, and catastrophise the system. we now have 3 reds in the bank. use the remaining change to swap a the small in DS1 to a red.

Ray's response. Ray currently can't do anything except sacrifice pieces for no goal, or catastophise something. the best such one would be sacrificing a red at his homeworld

Turn 3: swap the medium yellow at DS2 to a red.

Ray's response. he has none. he can't build to help himself, a catastrophe at this point is pointless for him.

turn 4 sacrifice a yellow medium to move both the reds at Ray's homeworld, regardless of his last move. catastrophise.

What'd I miss? how come it worked so quickly? oh wait i know. he could have sacrificed his medium and... nope, that doesn't save him. capturing the yellow allows the system to be catastrophed the next turn, and setup to ray losing next turn. Oh i see... I think it's because he could've prevented the use of the smalls by... wait nvm if he kept a small with him to prevent it from being built, it would have been a liability in the end anyway. actually, it might have slowed Lee down... let me see...

Ray responds by sacrificing a green 2 in DS3, building red in DS3, overpopulation, and building the red small at his homeworld

ray: can't do anything but remove a red, or build a green, or steal a yellow. stealing yellow means instant loss (red catastrophe).

turn 3: change something else to red: yellow at DS2. ray: build or nothing. either way he's doomed

please point out what i did wrong?

Monopoly is because both players have a monopoly on at least one colour at at least one point in the game (Ray monopolises red).

The position, in my notation, is this:

Notice that Ray has no yellow (so he can't move to new systems), and no blue (so he can't get new colors of ship). So he can't do anything except build red and green at the systems he already controls. (And of course sac red to do nothing, and sac green to teleport it around.)

For Lee to win, he'd have to do one of the following:

So Lee's overall strategy seems to be "build r3 to keep Ray from getting it; then build three big ships within one hop of Ray; then sac y3 to move them all in; Ray captures two of them; sac r3 to capture all of Ray's ships and win."

The final step could be "trade for red to blow up Ray's star"; but in that case Lee would have to have wrested some red from Ray's hands — either into Lee's ships or back into the stash. I don't see how that could happen.

Lee currently has three big ships, but he needs two more. So Lee's top priority is to keep the r3 out of Ray's hands... and also to get some green so Lee can build more ships.

Here is Lee's line assuming that Ray doesn't do anything to interfere (e.g. if Ray just does pass every turn). This is Destructible Lemon's solution, modulo a bugfix: Lemon forgot that Lee's second move returned a b2, so building b3 on the third move is impossible.

However, Ray can interfere right on turn number 1!

Or, Lee could try to soak up the r3 by placing it as a star. Lee might also gain access to green at the same time (by discovering a g1 star, or by invading DS5); but either way, Lee won't gain a saccable g2, which means he won't be able to get the two additional big ships he needs in order to checkmate in four. (Lee can't even use a blue ship to discover a g2 star and then sac the blue to trade for the g2 — a variant of the "investment" strategy — because Lee can't reach a g2 star in only one hop, and if he sacs a y3 to reach it in two hops, that leaves him even further from his goal of five big ships.)

Or, Lee's line could start with getting that g2; but then the whole thing goes right off the rails immediately:

Or, better, Lee's line could start with getting both green and r3 in one fell swoop:

Can Ray screw up this plan? Well, Ray is limited to shuffling around reds and greens, and after Lee's first move, Lee doesn't care about the distribution of reds and greens. Lee's ships never share a system with Ray's, so Ray can't interfere by capturing or catastropheing. But, Ray could still gain that second r3, like this:

I don't think Lee can do anything to stop Ray from doing that.

So, I think this puzzle is still flawed, and Lee cannot force a win in 5.