Back with another one move wonder homeworldsmate (link explains who Lee is, for example. Though I guess I'll explain here anyway.)

quick reminder, remember to use these rules, with the additional note that any action is optional, because I think that's what the rules say but it's kinda vague. 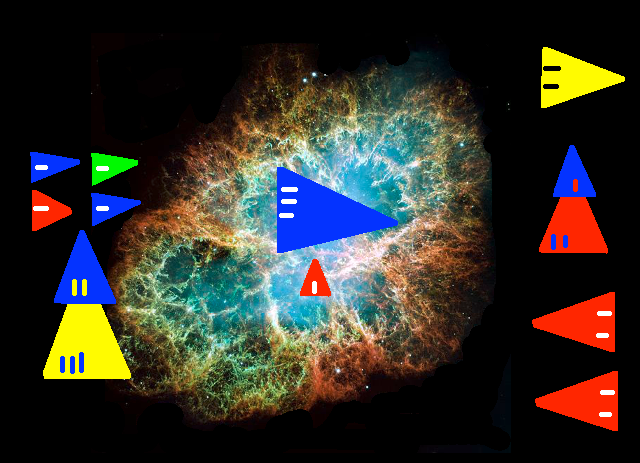 You like that background nebula decoration? I used gimp for like the first time (excepting one practice run) to do that. Either way it's my first second image exported from gimp (I made an edit to the puzzle just now). Not super high quality...

If you're just joining us, Lee is the player on the left. Her pieces are above their star systems, her pieces point away from the left, and she owns the homeworld on the left. Lee = Left for a possible person who didn't make the connection. Ray is the other player

Again, Lee won't be able to trade the yellow for a red, because the reds of that size are already all on the board, however, they're all owned by Ray this time, and the only way to catastrophise them would be eliminating Ray anyway.

Anyway, I've got the right ruleset this time (hopefully), so we should be fine as long as insolubility goes.

Like the other 1 move homeworldsmate, this has a unique solution (I'm pretty sure. don't sue me if I messed up the rules again).

Bonus round: explain the meaning of the (sub)title

I'm gonna tag this outer-space because consistency, again. game of space kings. Maybe Lee and Ray live in outerspace. Who knows? I guess I'll remove the tag if there's an issue though.

board-games outer-space homeworlds
Share
Improve this question
edited May 31 '20 at 20:45