Homeworldsmate: a chess puzzle (directmate e.g.) but with Homeworlds instead of chess. That's a term I just coined/made up, and since I'm currently the one making these, you're just going to have to accept it.

While I'm inventing names, I'll give Left player* a name. Her name is Lee. Right player shall be known as Ray.

Here is the devious Homeworldsmate puzzle just made (like the little star dots i added this time? I'm an arteest!): 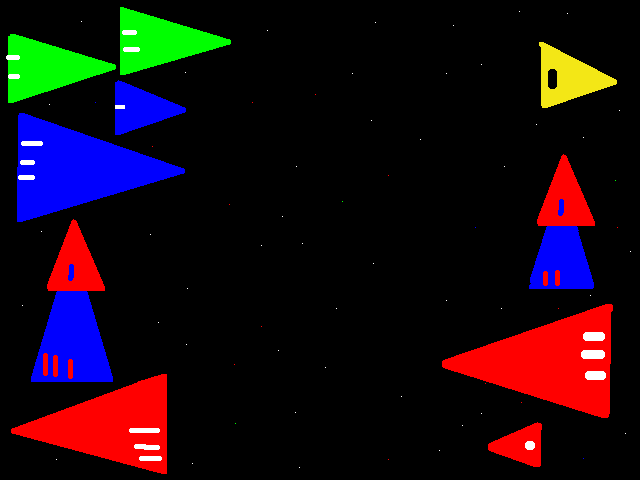 yeah that's right, less moves than last time (nobody say "*fewer moves" or you might have fewer friends >:[ ). However, I believe this one might be a bit more difficult. Also I'm pretty sure there's only one unique solution this time, as opposed to the small variety of paths in my last one.

anyway, let me give you small nudge about this puzzle. You may immediately want to change that yellow over at Ray's Homeworld (and cause a catastrophe), however, in a Homeworlds set, there are only 3 red smalls, and you'll notice all three red smalls are in play, leaving no red smalls to switch to in the bank.

Bonus round: explain the meaning of the subtitle/s. I couldn't decide on a singular one, so take the duplication to be a solving aid for this bonus.

Anyway, for our no-image puzzlers, and perhaps for other puzzlers who for some other reason also want text, here ya go:

(by the way, I decided to personify the players after Gareth's answer with the pronouns he picked, rather than using generic ones I guess.)

Also, I probably should have made Lee have lower pieces, but consistency is key and I already did it.

Also I hope you appreciate the trouble I took to release this now rather than tomorrow.

and yes, the game of space kings can be tagged outer-space thank you very much. I will not be tagging no computers, but that's only because it becomes the main tag when it should not, and that annoys me.

board-games outer-space homeworlds
Share
Improve this question
edited May 31 '20 at 20:45

With the rules originally linked the problem is insoluble, but with a slightly different set of rules there is a solution. I'll give both the insolubility proof and the solution, the latter hidden behind spoiler markup.

Note first of all that "wins in 1" can't mean "makes a move that then forces Ray to play a losing move", because Ray always has the option of doing literally nothing on his turn. So, in order to win as specified, Lee's first turn must itself be winning.

The only way to win is to make it false that Ray has at least one ship in his home system. So we must make that system not exist, or make it not Ray's home system any more (this is not in fact a thing the rules provide for), or make Ray have no ships there.

So Lee's only way to win in one move is to make Ray have no ships in his home system.

This might be done by moving the ship Ray has there (nope, the rules don't provide for one player ever to move another's ships), or by making it no longer be Ray's, or by destroying it.

The only way to change a ship's allegiance is by an Attack action. But an Attack action, whether done for free or by sacrifice, must be done using a ship of one's own in the system where the victim is, and that ship must be at least as large as the victim. The victim would have to be a 3R, and Lee has no ship in that system of size 3, and no way to get one. (Lee can do multiple actions, via sacrifice, but they must all be of the same type.)

So Lee's only way to win in one move is to destroy Ray's 3R in his home system. The only way to destroy ships is via overpopulation. So Lee must make that happen. It must be an overpopulation of red, because there is no means by which one player can change the colour of another's ship. So Lee must increase the number of red units in Ray's home system.

Can this be done by green (construct) actions? No. Construction can only add units of the colour of a ship you already have in the system affected. Since Lee starts out with no red ships in Ray's home system, construction cannot make there be any.

Can it be done by yellow (move) actions? No. Lee has no red ships, and moving cannot change the colour of a ship. (Also, Lee cannot move anything into Ray's home system directly, and has no yellow ship of size >1 to sacrifice in order to make multiple moves.)

Can it be done by blue (trade) actions? No. To do that, Lee would have to turn his yellow ship red, but there is no 1R available, so Lee would need to perform multiple trades by means of sacrifice. That's certainly possible, but how could it enable Lee to put a new red unit in Ray's home system? (a) By giving Lee a ship of size >1 in Ray's home system. Nope, trade can't do that. (b) By trading away a 1R somewhere so that there's one in the stash. Nope, Lee has no 1R ships. (She has a 1R star, but you can't trade stars.) (c) By triggering a catastrophe that destroys a 1R. Nope, because you only get to trigger catastrophes when you've finished your turn, at which point it's too late to perform further trades.

Can it be done by red (attack) actions? No. Attack actions never change the number or colour of units present anywhere.

And that's all the options Lee has. Nothing works.

The Looney Labs rules differ from John Cooper's in one key respect:

they allow a player to trigger a catastrophe at any time when overpopulation is present, not only at the very end of their turn.

Here's how we exploit that:

Sacrifice a 3B to do three trades; the first two turn two of Lee's ships in her home system red, triggering a catastrophe that destroys Lee's 1R star; the third then trades Lee's 1Y in Ray's home system for a 1R.

Destructible Lemon invites us to explain why "Inheritance or Insurance Fraud". Well,

burning down (half of) your home to raise resources for something you want to do sure seems similar to insurance fraud. I'm not so sure about "inheritance"; perhaps the idea is that Lee is receiving a sort of legacy from the star system that gave her birth?