On this site, we have numerous chess puzzles. however, we do not seem to have any Homeworlds puzzles, the game of space kings (yes this can be tagged outer space thank you very much.)

(I find it interesting that the tactic used in this puzzle did not seem to be mentioned in the strategy guide in my copy of the Pyramid Arcade Rulebook. Let that be a small hint, if I haven't messed up and missed that section of it. (though even if i did, the book far more emphasised bluebirds, other overpopulation tactics, and bank manipulation, than this kind of tactic (ooooooh is that a hint?) (also maybe later I should make a puzzle based on the bank))) 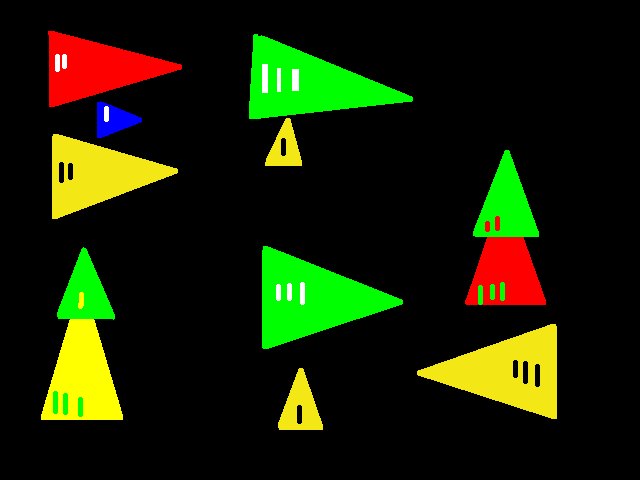 A (mostly accurate) description of the rules is here: http://www.ginohn.com/wunder201005/games/Homeworlds/HomeworldsRules.html

however, note that this is 1v1 Homeworlds, so there is no good and evil as described there; just destroy your opponent. Nonbinary Homeworlds died out a while ago, in a way... I far prefer the strategy of binary homeworlds to the weird mix it has made with intrigue in the multiplayer version, but then again, I never really did play multiplayer homeworlds...

(well, I should probably stop saying irrelevant things, but let me just say: Multiplayer can mean >2 players rather than >1 player, especially in board games. Do not try and say "but binary homeworlds is multiplayer")

anyway, for our blind people and low bandwidth no image people and confused people etc., here is a description:

Note: the actual position of the stars are not relevant btw. which is why the non-homeworlds are written after the homeworlds.

also uhhhh no-computers i guess. Sorry for how messy this question is. let's just say decoding it is part of the puzzle?

I think the following works. (But I'm not familiar with this game and may very well have failed to spot something.)

Left begins by sacrificing the 2Y ship in her home system to move both of her 3G ships into Right's system. (At this point, the systems she's abandoned are removed from the game.)
Now Right's system has colours G,Y,B available. He can't use Y to move, because then he would have no ships in his home system and would therefore be dead. So he must either construct or attack. He can't do either by sacrificing, because the sacrifice is the first step (at which point Right would have no ships in his home system and would be dead). So his possible moves are a single construction (leaving him with 1x3Y and one other newly constructed ship, with Left's ships still there too) or a single attack (leaving him with 1x3Y and 1x3G, and Left having 1x3G there).
In either case, Right has at most two ships in that system, and Left has a ship of size 3. So now Left can sacrifice the 2R in her home system to perform two attacks in Right's home system using that ship to turn both Right's ships Left, at which point Right is dead.

Not the answer you're looking for? Browse other questions tagged no-computers board-games outer-space homeworlds or ask your own question.