Soccer balls in the stadium

For any arbitrary set of three balls, at least two of those balls are exactly 10 metres apart.

What is the maximum number of balls can you put into the field?

You can get at least:

Like so (not to scale, lines indicate distances of 10m):

Then place a soccer ball at each vertex.

By the pigeonhole principle, two balls must be in the same rhombus. Now, if they were in the middle two vertices or adjacent to each other around the edge of that rhombus, they would be 10m apart. Otherwise, they must be at opposite tips, but then there is no place for the third ball. 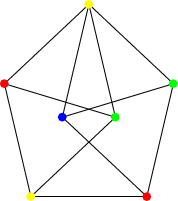 EDIT 2: Pjotr5 has a near proof of optimality - kudos to them. Let's finish it off. 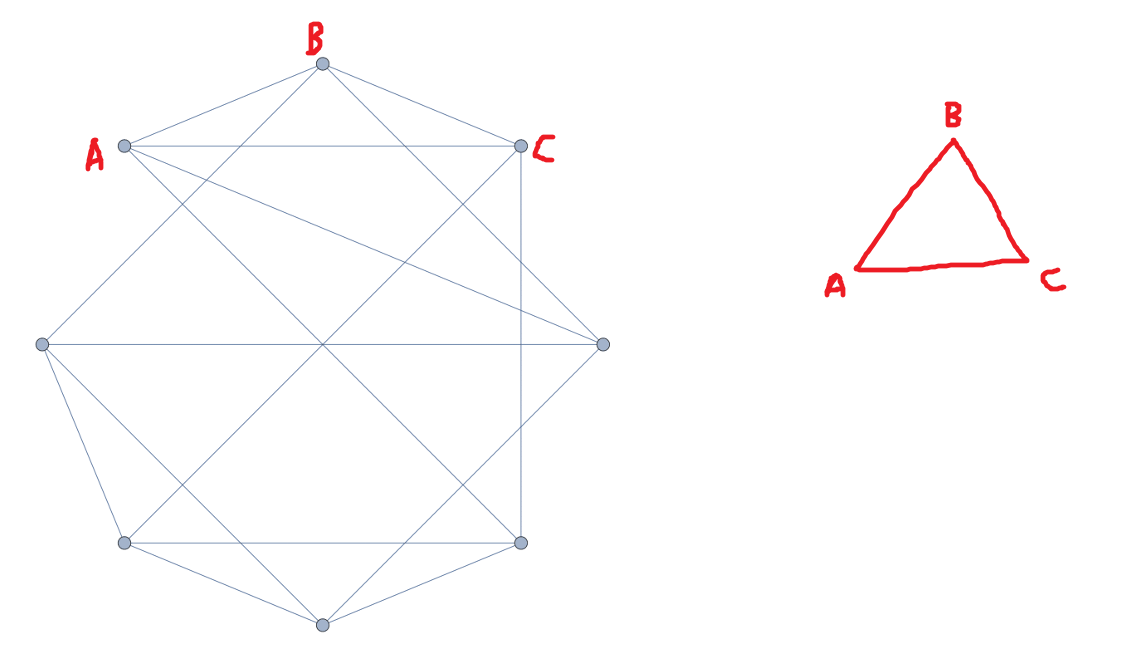 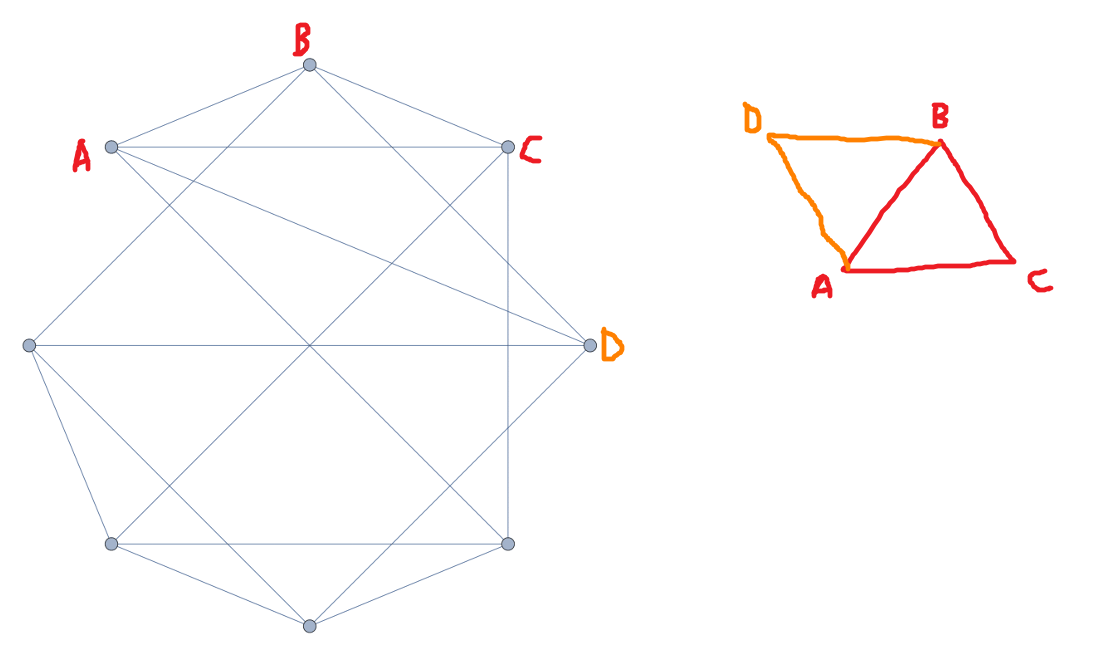 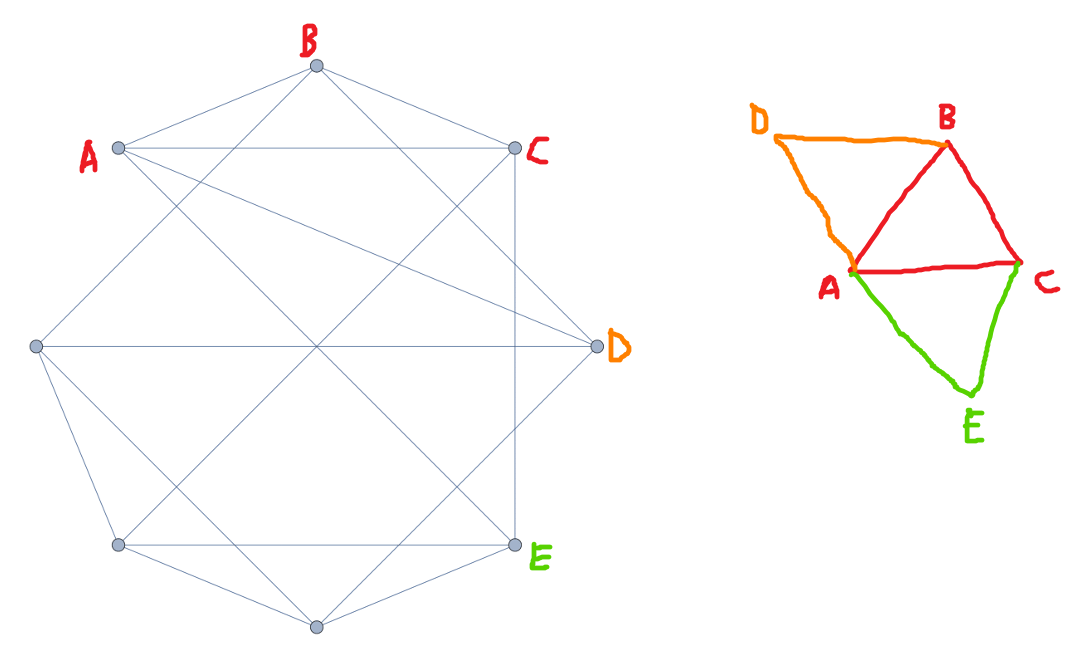 When we try to construct F, it must be one unit from D and one unit from E. However, they are two units apart and A is already halfway between them, so F and A would have to coincide. So we cannot construct a unit-distance graph with this graph either.

An approach to proving optimality (proof by computer)

Unfortunately $$R(4,3)-1 = 8,$$ so this does not prove that the configuration given by boboquack is optimal, but it does show that it is at least close. Now we can turn to the computer to investigate if there are any possible configurations with $n=8$, suppose that $G$ is a graph belonging to such a configuration. On this page we can find that our graph $G$ must, up to isomorphism, be one of these three graphs (I have only drawn the blue edges): 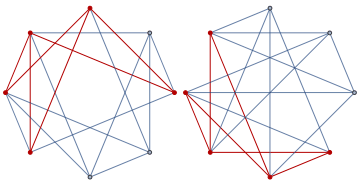 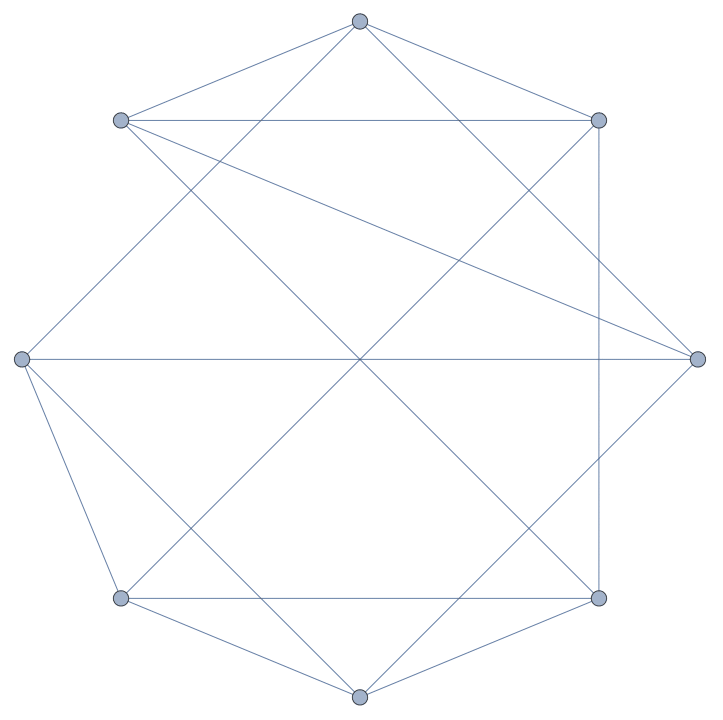 This can be turned into a purely algebraic problem for which the computer might be able to confirm that a solution does or does not exist.

We can give every vertex of this graph real coordinates $(x_i, y_i)$. Now we want to simultaneously solve all the equations $(x_i-x_j)^2 + (y_i - y_j)^2 = 1$ for all edges $(i,j)$. We can let Mathematica have a crack at this for this particular graph using the following input.

After some consideration, the computer yields False, which means that Mathematica thinks that a solution does not exist. If we trust the software and the hardware involved this completes the proof and shows that $n=7$ is optimal.

I suspect that there are also more clever ways to show that this is actually not a unit distance graph, maybe a way that someone on this website would be able to provide.

Here is a 2D configuration which allows

Put four of them on the corners of a square with edge length of 10m. Than stand an equilateral triangle on two opposite edges, and put two balls to the third corner of those triangles.

Proof that there are always 2 balls 10m apart among any 3:

As there are only two non-square corner placed balls, at least one of the three has to be a corner of the square (by symmetry, we can assume it's the one marked with red on the image). That one has three balls which are exactly 10 m apart from it (the blue ones): one that shares a triangle-edge with it, one that shares a square-edge with it, and one that shares an edge which belongs both to the square and a triangle. If any of these three is among the chosen three, we are done. If not, it means, the other two balls chosen are the non-neighbouring two (the yellow ones), but those happen to be 10m apart from each other.

I first came across this problem when a variant was asked (SPOILER WARNING) in a Spanish national newspaper in 2011. That variant gives the answer,

and asks for the configuration. The following proof that there is a unique configuration also shows that it is indeed the maximum. I shall call two points "connected" if they are at the appropriate distance.

In other words, the graph of the points does not contain a subgroup like this:

A connected shape like that is called a regular tetrahedron, and is not planar. Alternatively, if we take two of the points then the points which are connected with both of them are the intersections of the circles centred on the two and with suitable radius: 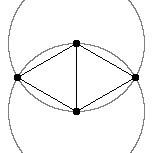 And it is easy to show that the distance between those two points of intersection is $\sqrt 3$ times too large.

Lemma 2: there is no $K_{3,2}$ (group of five points in which three are each connected to the remaining two)

In other words, the graph does not contain a subgraph like: 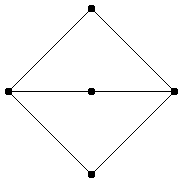 If it did, we would have three distinct intersections between two circles, which is not possible.

Let us choose one of the points with the highest order (number of edges) and call it $A$. It is connected to at least four points (lemma 3). Let us choose four of those points and call them $B,C,D,E$. What are the possible subgraphs induced by $\{B,C,D,E\}$? Up to isomorphism the possible graphs on four points are: 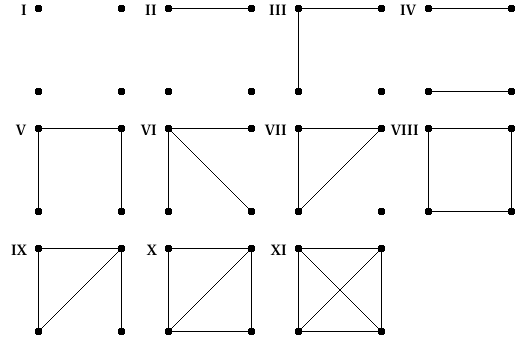 of which we can eliminate I, II, III, and VI because they have triples with no edge; and XI immediately by lemma 1. Since all four points are connected to $A$ we can also eliminate VII, IX, and X by lemma 1. Case VIII is also impossible: observe the following diagram for case V, and see that it would require $B$ and $E$ to be connected, when they are at twice the required distance. The only possible cases are IV and V:

Clearly in case V it is impossible for $A$ to be connected to a fifth point, $F$: if we consider the four points $B,C,D,F$ we see that they would have to form another case V, which puts $F$ opposite $D$ on the circle, and then $CEF$ has three points all at $\sqrt 3$ times the required distance.

In case IV it is also impossible for $A$ to be connected to a fifth point, $F$. If we consider the triple $BDF$ then $F$ must be connected either to $B$ or to $D$; without loss of generality we shall assume $B$, but then $BCEF$ must form a case V and we fall into the same trap.

Therefore $A$ is connected to precisely four other points.

There is a unique solution

Label the points which are not connected to $A$ starting at $F$.

Note that they form a complete graph, by the same argument as used for lemma 3, and therefore there are at most three of them. We assume that there are at least two, $F$ and $G$, and allow for the possibility that there is a third, $H$.

Note that none of these points can be connected to more than two of $BCDE$, by lemma 2 ($A$ and the higher labelled point being the part of size 2). 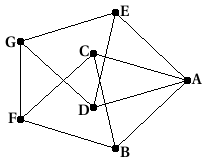 The geometry of the equilateral triangles combined with the connection $FG$ also forces a unique embedding, up to affine transforms.

The problem relies in the arbitrary set rule. 2 out of 3 balls must be 10m from each other. Depends on how you read that.

So the answer would be 4. In a square where each side is 10m, you cannot select a set who doesn't meet those conditions. The size of the field doesn't matter so long as that it is larger than 10x10m

Realize there's a way to do it better.

A hexagon where the distance of the two equilateral triangles that make it up are 10m sides. So 6, not 4.

Not the answer you're looking for? Browse other questions tagged logical-deduction graph-theory or ask your own question.

2
Draw ten dots that are all the same distance apart